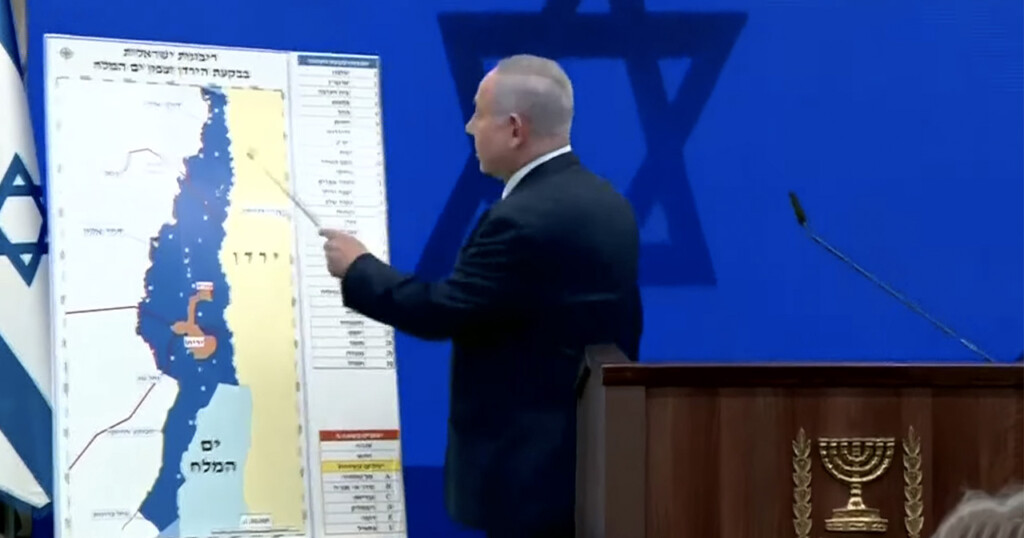 Reckon not that God is heedless of the oppressors; rather He defers their punishment to a Day in which eyes roll over and intellects evanesce.[1]

As the world passes through a difficult pandemic, the gross impunity of Zionist Israel is on course to escape international accountability once again. Plans are underway to illegally and brazenly annex more land from the occupied Palestinian territory of the West Bank as part of the fulfilment of the election deal of Benjamin Netanyahu (‘Bibi’) with his new-found ally Benny Gantz, as well as Trump’s so-called “deal of the century” plan. This deceitful plot hatched between these partners in crime refers to Jerusalem as “Israel’s undivided capital” and recognises Israeli sovereignty over large parts of the West Bank, throwing peanuts at the Palestinians.

As usual, despite (widely expected) strong condemnation of the move by the Arab League and the Organization of Islamic Cooperation (OIC) – who are “no longer a force on the world stage”[2] – the annexation will pass; as did the transfer of the American embassy to Jerusalem, and as did the US administration’s recognition of the legitimacy of the settlements. In this context, it would be a historical shame for mankind if another Nakba will also be allowed to pass, putting the Palestinian dignity already torn between Arab/Muslim apathy and international antipathy once again to the Zionist ‘wolves’!

Seventy-two years on, the shameful legacy of the Nakba continues. The proposed annexation will bring a new calamity for Palestinians, similar to the Nakba in 1948. It would constitute another chapter of dispossession for Palestinians in 2020. This year marks the 72nd anniversary of the Nakba, an event inked in infamy for generations of Palestinians that remember the 1948 expulsions by Zionist gangs in historical Palestine. The anniversary cannot come at a worst time, when an extremist right-wing government in Israel is bent on expanding its territory to all of historic Palestine. As Hanan Ashrawi, a member of the Palestinian Legislative Council,[3] says, “The annexation of Jordan Valley is an attempt to complete the catastrophe of 1948 and to completely liquidate the Palestinian cause. The US government was a partner in crime at a time when the world was preoccupied with the outbreak of coronavirus”. Ashrawi hopes that European countries will speak against the annexation.

In reality, for Palestinians, the Nakba does not just represent a historical event, but a continuing process that began in the 1880s as European Zionist settlers started moving into Palestine to lay the groundwork for their future state. The Nakba was a deliberate and systematic act that was necessary for the creation of a Jewish majority state in historic Palestine, which was overwhelmingly Arab prior to 1948. The Nakba therefore continues to live and breathe venom. The Nakba is not just about the original refugees, but also their descendants – today some five million of them qualify for the services of the United Nations Relief and Works Agency (UNWRA). In its current formulation, Israel knows only one direction: to deepen its domination over a people whose land it has stolen and continues to steal. [4] The Zionist state of Israel continues to systemically and consistently deny the suffering of the Palestinians, with mainstream media across the world downplaying and misrepresenting Nakba time and again.

In face of this continuing impunity, the leadership of the Muslim world has shamefully fallen into a ‘deer in the headlight’ defeatist mentality, adopting a laissez-faire approach that has largely abandoned the Palestinian cause for liberation. Israel is already driving conflict between Arabs and Palestinians to undermine the latter’s cause and strengthen its own position. Many Arab countries quietly cooperate with Israel on trade, security, and other issues, and the once-common stance that Israel has no legitimacy has lost some traction. The two-state solution has also fallen to the wayside. At a crucial time when the plight of the Palestinians calls for all the Muslim support they need, it is a shame to see the vicious attempt by certain Gulf regimes to normalise their relationship with criminal Israel.

A drama TV show called Exit 7,[5] produced by Saudi Arabia’s MBC TV, generally reflect these Arab leaders’ standpoint. This show, which caused consternation particularly among the Arab masses, contained a scene in which two actors argue about normalisation with Israel. One character says, “Saudi Arabia did not gain anything when it supported Palestinians, and must now establish relations with Israel … The real enemy is the one who curses you, denies your sacrifices and support, and curses you day and night more than the Israelis.” Most saw this show as part of a broader campaign to vilify Palestinians and rehabilitate Israel as part of warming ties between itself and Gulf states. With their history of ‘cozying up’ with the Zionist regime, and given the level of state control in Gulf countries, it was certain that the show’s messaging must have been officially sanctioned.

Without legal accountability, financial sanctions, and other corrective measures, settler colonialism will be normalised. This is bad news for the entire international order. The United Nations, the EU, as well as many countries have already warned against such a move. In a recent interview published by Der Spiegel, King Abdullah II of Jordan issued a stark warning over Israel’s plans.[6] However, with US backing, Israel’s impunity continues unchallenged. Israel has been in non-compliance with more than 40 Security Council resolutions and about 100 UN General Assembly (UNGA) resolutions. In fact, the UN Security Council failed to follow through in implementing economic and political consequences for Israel when it annexed occupied East Jerusalem and subsequently the occupied Syrian Golan Heights in 1981. Thus, as Michael Lynk, UN Special Rapporteur for the Palestinian issue, says, “Israel has learned an undeniable lesson with respect to impunity – that the international community will do virtually nothing as a consequence to Israel, so it can, in fact, have its cake and eat it too … We have reached a point where resolutions without resolve can no longer contribute to reaching the just and durable peace and human security that Palestinians and Israelis deserve.” There is no clear EU strategy on how to stop Israel’s plan or how to respond in a meaningful way if annexation goes ahead. In fact, it is a question of duplicity and lack of international political will, especially as the UN did respond constructively when Russia captured and annexed Crimea from Ukraine in 2014.[7],[8]

Thus, in light of international and Muslim world apathy, the progressive movements based in Europe need to regionally initiate a renewed wave of activism to lobby the EU – and by extension the UN – to make it clear to the Zionist regime that Israeli entities in the occupied territory will not be treated as being part of Israel, and that any annexation will be met with consequences such as a ban on imports from the settlements. Bibi and Trump should be deterred before they act. Shouting after the fact will achieve little. If the outside world allows them to go ahead with their plans, these international bodies with tremendous clout will bear a major part of the responsibility for the consequences.

As for us as part of the Muslim Ummah in particular, there is a need to lead the initiative to keep the Nakba as a focal point of reference. It is necessary we remember and discuss it as a formative part of the history of the Palestinian struggle while working towards re-gathering global efforts to bring peace and the reality of a homeland closer to a people that have lived in catastrophe for nearly a century and that long for peace, freedom, and security.

Only persistent activism at the grassroots levels calling for meaningful action and for a diplomatic tsunami[9] (as the then-Israeli defence minister Ehud Barak warned nine years ago) will bear results. This is also a divine duty to fight oppression as Allāh stresses in the Qur’ān.