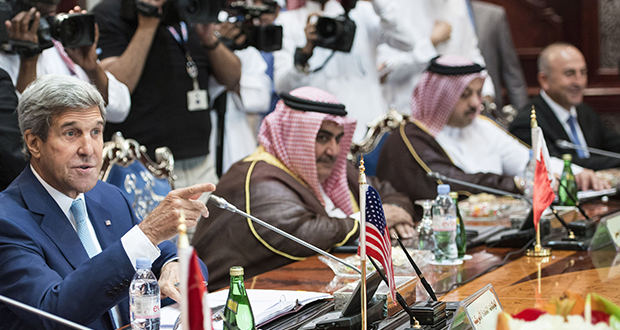 The following article does not necessarily represent Islam21c but rather it is a translation for information purposes of a statement given by the Muslim Scholars Association, representing more than 110 scholars from over 30 countries.

Scholars’ Statement Surrounding the International Coalition in Iraq and Syria

In the name of Allāh, the Most Gracious the Most Merciful

All praise is due to Allāh, and may peace and blessings be upon the Messenger of Allāh, his family and his companions. As for what follows,

So far, the International Coalition has declared its militarily intervention a ‘war on terror’. Despite this, it has mobilised more than 60 nations, dedicating a budget equivalent to several countries combined, to combat a single fighting faction, the numbers of whom do not exceed the army of the smallest participating nation. All of this indicates its very cunning intentions besides what has been openly declared.

More amazingly, the ‘anti-terror’ campaign has completely overlooked the terrorism of the Syrian regime that has killed more than 300 thousand civilians, turned a blind eye to the terrorism of the Iranian regime, one that has assisted Asad’s army while funding extremist militia in all of Lebanon, Iraq, Yemen and Bahrain. This is not withstanding the coalition’s total disregard of the Zionist nation’s terror, and its unqualified backing of its recent war against the Palestinians whereby more than 2000 were killed, 10,000 injured and 170 mosques destroyed. Not to mention the happenings in Burma and CAR that are of no interest to the coalition whatsoever.

All of this is taking place alongside a concerted effort to deform the definition of the word ‘terrorism’, such that to obscure the difference between legitimate resistance and resentful terror, throwing the latter accusation at whoever disagrees.

What elucidates this are the war’s declared aims, as alleged by the parliamentary councils of the participating nations and their media outlets, purporting a ‘war against Sunni militias.’ But as Allāh says: “and what their breasts conceal is greater still.”[1] In reality, the real aims of this war culminate in splitting Muslim nations further, depleting the wealth and resource of the Gulf, creating excuses for intervening in Gaza, and weakening Turkey and pulling down its government.

In light of these facts, the signatory scholars and research institutes declare in this statement the following:

1) Scholars and Dʿāīs within the Muslim world must fear Allāh, and fulfil the obligation that Allāh decreed through the charter He decreed upon them. That they should openly declare the truth and openly reject falsehood, and make clear their inward conviction that it is impermissible to assist the enemies of Allāh: “You shall certainly make it known to men and you shall not hide it.”[2] Nobody claims otherwise or assists the enemies of Allāh except that he is a hypocrite or severely ignorant.

2) Remaining silent when the Muslims are being assaulted is of the greatest of sins, how huge of an offence is it then to assist the enemies of Islām against Muslims?! Allāh says: “O you who have believed, do not take the Jews and the Christians as allies. They are [in fact] allies of one another”[3] by assisting them physically and logistically. Allāh continues, “and whoever is an ally to them among you then indeed, he is [one] of them.”

Allāh further says: “Let not the believers take the disbelievers as Auliyā (supporters, helpers) instead of the believers, and whoever does that will never be helped by Allāh in any way.”[4]

Commentating on this, Imām al Tabari states, “this means that taking the disbelievers as supporters against the Muslims, indicating the latter’s weaknesses disassociates one with Allāh and Allāh disassociates with him for a result of this person’s leaving of their faith.”

Al Azhar’s Fatwa council had historically issued a Fatwa concerning military coalitions with non-Muslims. The Fatwa indicated that, without doubt, backing and supporting the enemies of Islām includes reinforcing them with anything that strengthens them intellectually and militarily, both secretly and openly. All of this is completely forbidden upon a Muslim regardless of any excuse that he perceives legitimate. These coalitions only seek to arouse Fitnah between Muslim entities, pulling apart their unity whilst establishing a presence in its quarters. No Muslim country is permitted to partake in such coalitions due to the imminent danger posed on Muslim interests.[5]

3) It is impermissible for all Muslims, leaders and subjects alike, to contribute to this waged war in any way whatsoever. Rather, it is obligatory to disassociate from it completely and repel it in every way. This international coalition is a trial from Allāh Most High whereby He is purifying the Muslims and distinguishing the pure from the impure. Allāh said: “On no account will Allāh leave the believers in the condition which you are in until He separates the evil from the good”,[6] and He said: “And most certainly Allāh will know those who believe and most certainly He will know the hypocrites”.[7] He also said: “Have you not seen those who have become hypocrites? They say to those of their brethren who disbelieve from among the followers of the Book: If you are driven forth, we shall certainly go forth with you, and we will never obey any one concerning you, and if you are fought against, we will certainly help you”.[8] And has said: “Announce to the hypocrites that they shall have a painful chastisement: Those who take the unbelievers for guardians rather than believers. Do they seek honour from them? Then surely all honour is for Allāh.”[9]

4) Saying this, legitimate Jihād is the type that contains no extremism or prejudice. Signatory scholars have previously released very clear statements condemning the actions of the group that ascribes itself to Jihād, but is more known for accusing others of disbelief (takfīr), killing Muslims and targeting the leaders of Jihād themselves. Scholars have also denounced this group for forsaking Muslim scholars and for their rejection of advice and guidance which has resulted in their perpetration of major violations to the Sharīʿah. Without doubt this is from the reasons the Ummah has fallen into this major Fitnah and from the things that were used as an excuse to this intervention.

5) Scholars who have undersigned this statement also reaffirm their rejection and condemnation of targeting civilian journalists, doctors, paramedics and aid workers, Muslims and non-Muslims alike. Regardless of whether the perpetrators are those who claim that they are Mujāhidīn, Asad forces or the International Coalition that claims it is fighting terror, this is utterly condemned. As for resisting the tyrannical, despotic enemy with all available means, then this is a guaranteed right for anyone by consensus of all Muslims without qualification or restriction.

We reassure the Ummah that the victory of Allāh is lingering nearby. Victory is but with patience, and ease is but with difficulty and affliction. Allāh says: “Allah will help him who helps His cause; most surely Allāh is Strong, Mighty.”[10]

We ask Allāh the Most High to protect our Ummah, to establish for it the religion that He chose, to repel the evil plots of its enemies and to allow it to return to its religion in the most beautiful way. All praises and thanks are due to Allāh the Lord of the Worlds.

The signatories of the statement:

Previous: A guide to talking about others
Next: My Son Is Not a Terrorist But He Was Terrorised