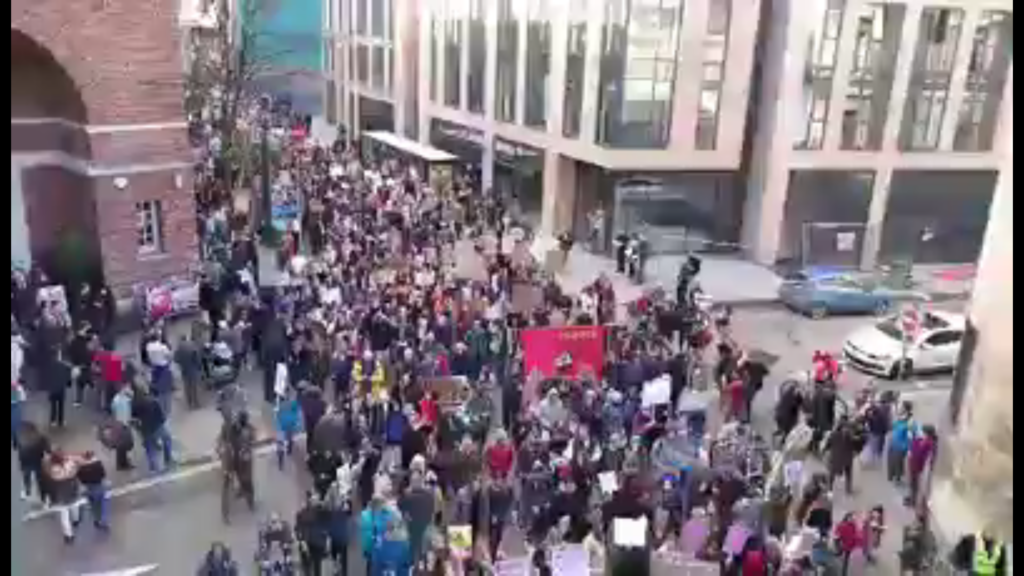 On Saturday Bristolians marched against Trump’s ‘Muslim Ban’ and ‘Theresa the Appeaser’. Owen Lloyd-Jones reports on the sound-system demonstration in Counterfire

In Saturday’s beautiful sunshine, a diverse group of protesters of all ages, from babies in pushchairs to pensioners, began gathering from around midday to make placards at the ‘Fountains’ point in Bristol city centre.

Soon, a Dj-manned sound system brought lively movement to the crowd, and chants swelled around a brief opening rally, followed by a potent – at times raucous – march numbering 2,000 Bristolians, which looped round the main shopping streets back to the starting point for send-off speeches and an impromptu dance party.

The march was called by Bristol Stop the War Coalition and Stand Up to Racism Bristol (supported by Bristol People’s Assembly) in tandem with the large one in London and others across the globe, to protest Donald Trump’s ban on Muslims of seven countries and refugees from entering the US, and to begin to rally massive forces against his potential State Visit to the UK.  It followed a rain-soaked but vibrant, thousands-strong emergency rally in Bristol on Monday (30th January) organised by two young women, which gained much local attention.

Speakers from the organising movements and other groups at the Saturday march were well-received, however there were four guest speakers who really caught the enthusiasm of the crowd. Hibaq Jama, Labour councillor for Lawrence Hill and herself the daughter of Somalian refugees, described the climate of fear among children as young as seven in her local schools, slamming Trump for legitimising racist talking points.

Farzad, a Junior Doctor born in Belfast and raised by immigrant parents, emphasised the contribution of immigrant labour in propping up the NHS in the face of brutal government cuts.

Fernand Osorno, a Mexican student from Bristol University, spoke of the benefits of the longstanding cultural interchange between Mexico and the US and attacked Trump’s ludicrous plan to build a border wall financed by the taxes of the very people it’s designed to keep out.

But it was Bristol student, Sudanese refugee and anti-racist campaigner Kamal Mohamed who arguably stole the show, with his darkly hilarious account of the morning he woke up to find he had been designated a potential terrorist, for no other reason than his place of birth.

Following the speeches, the march set off in a carnival atmosphere, chanting, drumming and waving a variety of creative home-made placards, with one woman’s portable speakers sounding out some welcome bass music during a ten minute pause at one junction!

Led at various points by Kamal Mohamed himself, a flag-waving Mexican woman, and groups of sixth-formers and young women(some wearing the hijab), the crowd pulsated with calls of, “When Muslims are under attack… We stand up, we fight back!” and “All the walls have got to go… From Palestine to Mexico!”

It proceeded through the main shopping streets past the Cabot circus shopping centre, drawing throngs of curious and largely supportive Saturday shoppers, before looping back to the starting point for another brief round of speeches, including a call from a People’s Assembly speaker to build an anti-Trump movement big enough and broad enough to utterly discredit and bring down Theresa May (labelled ‘Theresa the Appeaser’ on placards) and the Tories, and stop any UK involvement in Trump’s increasing aggression towards Iran.

The day wasn’t over yet though, as the DJ took back the sound system, leading to a lively open-air rave party of several hundred people, inspired by Bristol sound system culture.

While Bristol has seen a number of street protests around these issues recently, this one and also Monday’s rally seem particularly significant for three main reasons. Firstly and most obviously, the size of the demo, as illustrated by this incredible aerial video.

Secondly, and on a related note, the diversity of the crowd both demographically and ideologically.  Although the anti-war movement in this country has fought consistently against western military intervention, the soaring rhetoric and affable demeanour of the last US president seemed to conceal from some of its sympathisers the disastrous consequences of his drone-led warfare (in spite of much campaigning), notably in Libya. Trump’s overt nationalist chest-beating gives no such illusion of safety, so it was heartening to see on Bristol’s streets that the anti-war movement encompasses as broad a political spectrum as ever and is ready to fight from the start of Trump’s presidency.

Third, throughout both demonstrations, there was a clear sense of determination and a recognition that these demos are not the end-result for the movement, but the beginning. Bristol’s anti-racist and anti-war protesters are ready for the fight, and with an unelected Prime Minister with a wafer-thin majority and a historically unpopular new occupant of the White House, there is a real sense that this is a fight we can win. Next stop, a Bristol Stands up to Trump demo coinciding with Parliament’s vote on Trump’s planned state visit and in solidarity with the national migrant day of action on Monday 20 February.