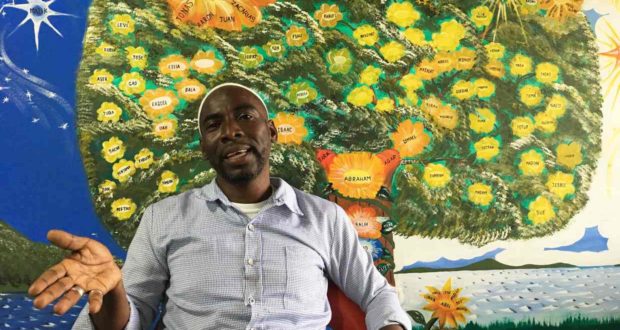 Blaring salsa music from a neighbouring bar does not perturb Sheik Munir Valencia as he bows in prayer at a family-home-turned-mosque in the poor, violence-racked Colombian city of Buenaventura.

His prayers finished, Valencia sheds his brown tunic, sits down at a plastic table and describes his role as the spiritual leader of an Islamic community like few others.

The small community of Afro-Colombian Muslims in Colombia’s main Pacific port city have over the years embraced the teachings of the Nation of Islam, mainstream Sunni Islam, and the Shia denomination.

First attracted to the faith by the promises of black power, Buenaventura’s Muslims say that they have found in Islam a refuge from the poverty and violence that racks the city, which has one of the highest murder rates in Colombia.

Islam first arrived here in the late 1960s thanks to Esteban Mustafa Meléndez, an African American sailor of Panamanian origin, who spread the teachings of the Nation of Islam – the US-based group that mixes elements of Islam with black nationalism – among port workers.

“He talked about the self-esteem of blacks, and that philosophy had a big impact. Those teachings reached the heads and hearts of a lot of people,” says Valencia, adding that the message came during a period of profound social change.

Meléndez’s visits came at a time when many rural Colombians were migrating to cities, losing in the process the social connections of their extended families, said Diego Castellanos, a sociologist who has studied different religions in Colombia, an overwhelmingly Catholic country.

“The Nation of Islam offered an alternative identity and it was a way to fight back against the situation of structural racial discrimination in the port,” he said. Ninety per cent of the population of Buenaventura is Afro-Colombian.

That first wave of converts tended to be more political than spiritual: they said their prayers in English or Spanish, read more political pamphlets than the Qur’an, and had a shaky understanding of Islam’s central tenets, said Valencia.

The appeal of the Nation of Islam gradually waned as Meléndez’s trips came less frequently and the message of black supremacy began to sound hollow to a community that – while victim of severe structural discrimination based on their race – never suffered the same racial hatred and segregation laws that had existed in the United States.

Following the example of Malcolm X – who broke with the Nation of Islam and embraced Sunnism before his death in 1965 – a member of the Buenaventura community travelled to Saudi Arabia to study Islam and came back to convince the group to embrace a more orthodox faith.

“Just like that we were Sunni,” says Valencia, who was raised Catholic and planned to become a priest before turning to Islam. “We learned to read Arabic, we read the Qur’an, we no longer looked toward the United States and started looking toward Saudi Arabia,” he says.

Buenaventura’s Muslim community turned to other Sunni groups in the country for support, but their two worlds could not have been more different.

The Muslims from Buenaventura, set between vast expanses of jungle and the Pacific Ocean in Colombia’s south-west, were black, poor and relatively new to the beliefs and traditions of Islam. The established Colombian Sunni community was of Arab heritage, made up of prosperous traders and based predominantly in Maicao, a bustling commercial town set in the north-eastern desert on the border with Venezuela.

Aside from a few food donations from the Arab community, relations were distant.

The 1979 Islamic revolution in Iran breathed new life into the Buenaventura community. Shia missions contacted the group and offered scholarships and financial support. Valencia won a scholarship to study at the At-Tauhid mosque in Buenos Aires and then continued his studies at the University of Qom in Iran.

As Valencia tells his story, his mobile phone lights up, his ringtone a chant in Arabic. He answers: “Salaam alekum,” then launches into a conversation in the rapid-fire Spanish of Colombia’s Pacific coast.

Today, portraits of Malcolm X and the Ayatollah Khamenei adorn the walls of a back room in the home that serves as community center and mosque for the roughly 300 current members of the community. A colourful mural covers another wall, depicting a leafy family tree titled “Islamic genealogy of the prophets”. On any given Friday, between 40 and 50 show up for prayers.

Valencia says his links with Iran have been the target of secret and not-so-secret investigations by both Colombian and US intelligence services. “I have nothing to hide,” he says. “[The Iranians] support us. But we are not jihadists.”

Valencia also runs two private charter schools where 180 children of some of the poorest neighborhoods of the city not only learn their ABCs but their alif ba tas as well. Housed on the ground floor of an ill-maintained three-storey building, the Silvia Zaynab school is set in one of Buenaventura’s most violent neighbourhoods, where criminal gangs fight over territorial control and residents often get caught in the crossfire.

The school offers a small haven from that reality. Students greet visitors with songs in Arabic about the greatness of Allah. In Spanish, they sing about the “five prophets of creation”: Noah, Abraham, Moses, Jesus and Muhammad. One second-grader rushes to the chalkboard to proudly write out a random three-digit number in Arabic.

Only five of the children who attend the schools are members of the Muslim community. “We are not trying to convert anyone,” says Valencia. “We’re just showing the children to respect other religions and other traditions.”