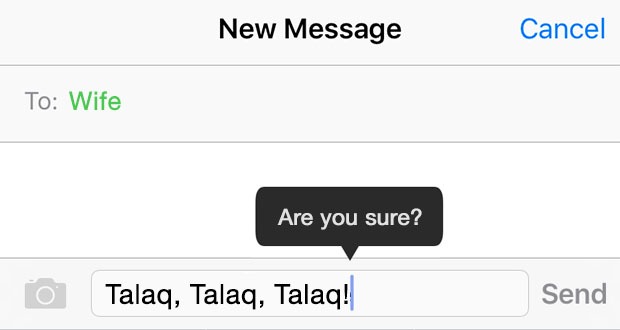 In this series we have been discussing the importance of the topic of marriage and divorce that so many of us belittle or neglect until we run into problems. We were reminded that any remedy for the conscious attempt by Shayṭān and his allies to dismantle the Muslim family unit, must include a retreat to the Qur’ān and its guidance. In the last few articles we reflected on several important principles extracted from ayat of the Qur’ān, and now we turn our attention to the last in our list of twelve, God willing.

“You do know not, perhaps Allah will bring about after that a different matter.”[1]

Do not rush in making a decision. For some, the mentioning of divorce is always at the tip of their tongues. With every fall-out, the topic of divorce has to be brought up.

It is very common for one to receive two text messages from the same person. The first message is one of fury, where an immediate divorce is being demanded “at this very moment in time without delay!” One then clicks the next text message which was sent minutes after which reads, “Please ignore the first message. Alḥamdulillah, everything is now ok.” Worse still, there have been documented cases of divorce that were the product of one football team that defeated the other. Her team defeated his, she had a laugh at him and so he issued a divorce.

Allāh has placed the reins of divorce in your hands, my brother, for a great reason. Thus, do not abuse this responsibility which Allāh has chosen to give you. Similarly, my sister, should you fall out with your husband, do not challenge him by saying, “Go on, divorce me if you’re a man! I dare you!” This is just as thoughtless and inconsiderate.

If life becomes unbearable, then Allāh has provided divorce as a way out, but when is this made mention of? Most certainly not at the heat of the moment, but after time has passed, after you have prayed abundant Istikhāra, after you have consulted the people of knowledge, after you have thought about the ins and outs of such a decision.

I know of men who have divorced their wives irrevocably and their only wish in life is for them to return to their wives. But, they cannot because he has divorced her three times and she now needs to marry another person and consummate the marriage, without having planned this, for them to get back together again. Had they applied this principle, they would not have found themselves in this predicament.

One judge mentioned that a man came to him having divorced his wife for the third time and was in an unimaginable state of regret. He had spent a year visiting various scholars before him but they told him that she could not return to him. The judge tried to find a way out for him and so began to investigate the circumstances of each of the three divorces. After a thorough investigation and after having conversed with both spouses, he found that one of those three divorces did not actually count for one reason or another, so he told them as such and warned him from ever returning to this type of behaviour. The man asked again in a state of disbelief, “Sheikh! So is she my wife?” He said, “Yes”. The judge, describing this incident, said, “They hugged one another in front of me as they both cried profusely.”

It was clear that they still loved and wanted to be with one another.  Why, then, allow matters to reach this stage? Do not rush in making drastic decisions, for “you do know not, perhaps Allāh will bring about after that a different matter.”

“Divorce is twice, then, either keep her in an acceptable manner or release her with good treatment.”[2]

There may be situations where divorce is genuinely needed. It may be that one strives to apply these principles to the best of their ability, having displayed much patience and engaged in every possible endeavour to keep such a marriage alive but, at times, the couple may truly need to walk separate ways. With regard to this, Allāh says,

“But if they separate [by divorce], Allāh will compensate both of them from His abundance.”[3]

Divorce is indeed sometimes a way out but, even in the situation where divorce is resorted to, it is to be carried out honourably and fairly. “Either keep her in an acceptable manner or release her with good treatment.” Ibnu Kathīr said,

“This verse means to not be vile, to not swear and to not be harsh, but rather, he should divorce her in a beautiful manner.”[4]

The effectiveness of applying the Islamic mannerisms of divorce in keeping a marriage alive:

One can safely say that if the Islamic methodology of divorce on its own was to be applied by Muslims, 9 out of 10 problems would disappear before the divorce becomes binding. Why is this? Ponder over some of the Islamic mannerisms of divorce and you will see why.

1 – You are only allowed to issue the words of divorce during a period of her purity during which you had not had intercourse with her.

“When you divorce women, divorce them at their prescribed periods.”[5]

This rule on its own, if applied, will deal with countless cases where divorce would have otherwise been issued, since he first has to wait until she menstruates following their marital relations before issuing the divorce. If this rule is adhered to, they will both almost inevitably have cooled down by then. But, unfortunately, this rule is rarely adhered to. A divorce that takes place during a period of her purity in which he had intercourse with her or a divorce issued during her menses is referred to as “Talaaq Bid’i”, an innovated divorce, and one is sinful for doing so.

Does it count as a valid divorce or not? The majority of scholars are of the view that it does count, whilst others like Ibnu Taymiyya and Ibnul Qayyim say that it does not.

If a husband cannot divorce his wife during her menstrual period and neither can he divorce her during her periods of purity if he had intercourse during it, and instead has to wait until she menstruates and then becomes pure before issuing the divorce, if need be, in the majority of cases, the husband would have changed his mind by then and the problem is solved.

2 – If a divorce is issued, the waiting period for one’s wife is in the marital home.

“and turn them not out of their (husbands’) homes, nor shall they (themselves) leave.”[6]

The general rule is that the waiting period is to be in the family home. The husband is not allowed to kick her out nor is it permissible for her to leave. Then, Allāh told us of the wisdom behind this, saying:

“You know not, perhaps Allāh will bring about after that a different matter!”

This is an opportunity for them to reconsider their stance as, perhaps, the husband may decide to take his wife back.

How long is this waiting period?

During this period, the vast majority of men end up taking back their spouses, except in rare circumstances where such a person is genuinely convinced that he wants separation. What happens if she spends this waiting period in her parents’ home? The gap between them only widens.

3 – Do not play with the topic of divorce.

It may be that his wife defeats him in a game of scrabble and he ‘jokingly’ says, ‘That’s it, you’re divorced.’ Such a ‘joke’ is not funny in the slightest. The majority of scholars are of the view that such a divorce is binding. Similar reports were narrated from ʿUmar b. Al-Khaṭṭāb, ʿAlī and Abū Ad-Dardā.

This is regarding a person who jokes about divorce explicitly. As for a person who utters words of separation indirectly, for example ‘We’re done’, ‘I never want to see you again’, then it is the intention behind it that plays a decisive role as per whether this constitutes as divorce or not. The scholars say that if he intended divorce with those words, then it is binding.[9]

Train yourself to not always bring it up in discussion as the matter is evidently gravely serious.

One of the scholars said that he receives questions pertaining to divorce on a daily basis. The last person who asked him about a divorce which he had intended to make, i.e. the Islamic way of navigating divorce, was a questioner who approached him 15 years ago.

Divorced women are not inferior to others:

Finally, I close with a message which I send out to those individuals or communities who look at divorced women with the eye of belittlement or doubt and treat them with second class treatment though, in many cases, her divorce was due to nothing but the abusive and tyrannical treatment of her husband. There were divorced women of the past and divorced women of today who are amongst the most righteous of people. In fact, our mothers, the wives of the Prophet (sall Allāhu ʿalayhi wa sallam) were all widows or divorcees, with the exception of ʿĀ’isha (raḍiy Allāhu ʿanha).

Furthermore, the Muslim community of the past would rush at the doors of the widowed or divorced woman, requesting her hand in marriage. Allāh would reveal ayat of Qur’ān in this regard approvingly, telling the believers that there is no sin on them on doing so long as we do not make the offer during their waiting period. Allāh said,

“And do not determine to undertake a marriage contract until the decreed period reaches its end.”[10]

If we are to rid our communities of the ignorance of shunning the divorced or widowed woman and instead behave as our Prophet (sall Allāhu ʿalayhi wa sallam) and Sahaba (raḍiy Allāhu ʿanhum) did, the divorced or widowed woman would not have to wait years on end before finding a life partner, nor would she have to surrender the criteria which she has, settling for any spouse. Instead, our men would rush to her door, seeking her hand in marriage.

[8] Narrated by Abu Daawood in his ‘Sunan’, At-Tirmithi in his ‘Jaami’’, Ibn Maajah in his ‘Sunan’ and others on the authority of Abu Huraira. The scholars have differed as per its authenticity. Shaykh Al-Albany has classified it as Hasan/sound.