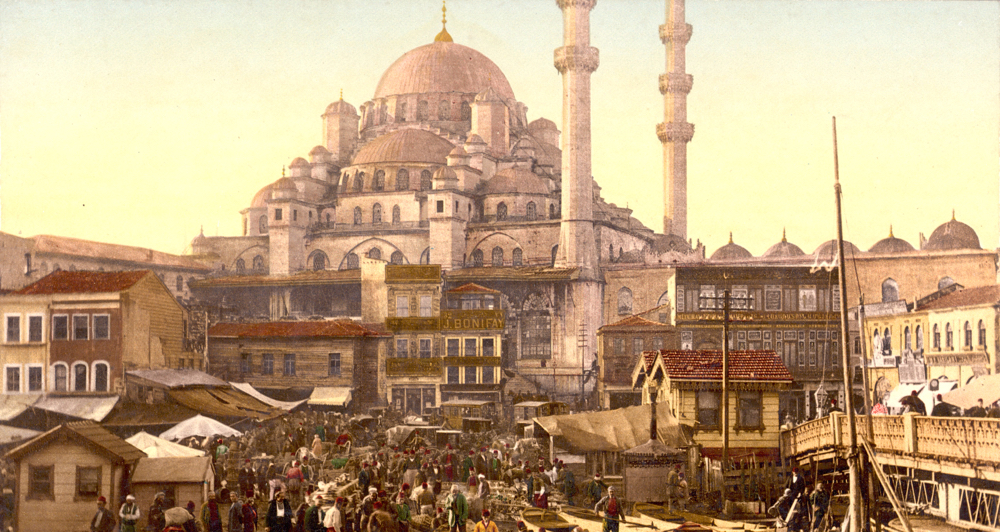 Throughout history the disease of nationalism is a consistent cause of the downfall of nations. In a startling display of this Abū Jahl cited that his aversion to becoming a Muslim, despite knowing that the Prophet (sall Allāhu ʿalayhi wa sallam) was indeed a Prophet, was tribal competitiveness. He says:

“I know that he is telling the truth, but there is something holding me back. The descendants of Quṣayy b. Kilāb b. Murrah [whereas Banū Makhzūm was the descendant of Yaqaẓah ibn Murrah] wanted al-Ḥijābah (Guardianship of al-Ka‘bah and preservation of its key), as-Siqāyah (Custody of Zamzam and catering the pilgrims during the Ḥajj), al-Ifādah (Authority of trade and commerce), al-Liwā’ (Authority of the banner of battles), the authority of armed forces and an-Nadwah (Assembly of the Quraysh). We sacrificed all in favour of them [Banū Makhzūm was only in charge of the cavalry Khālid b. Walīd being its commander] and started picking up and competing with them. When we are running neck to neck, they say ‘We have a prophet among us’; How can we compete with that? By Allāh, we are never going to accept this.”(Bayhaqi)

During the 19th century the Ottoman government began desperately trying to arrest the gradual decline of the empire. Sultans Mahmud II, Abdülmecid and Abdülaziz attempted to reform the empire through the implementation of what was called Tanzimat (reorganisations). The approach that was taken is consistently echoed in the approaches that are taken today by the majority if not all countries inhabited by Muslims. This liberal philosophy is an attempt to implement something similar to the European model, distancing authorities from religion and allowing secular ideas to influence laws and government practice.

Contrary to what was expected, these reorganisational reforms did nothing to slow the decline of the empire and in some instances the emphasis on non-Islamic identity allowed nationalistic notions to take hold of the empire’s subjects. During this era, Ottoman provinces of Serbia, Greece, Waalachia, Modova, Abkhazia, Bulgaria and Algeria were all lost to European encroachment or nationalism.

Sultan Abdul Hamid, however, decided to take a different approach. Due to the loss of territory in the years preceding his term and at the beginning of his term, the empire was now overwhelmingly Muslim, which was a stark change to the past, where at some instances, the empire was 80% Christian. So, Abdul Hamid decided to push Islām as the dominant unifying ideal among the subjects of the Ottoman Empire.

To promote Islām as the dominating factor, he placed much emphasis on the holy sites of Makkah and Madinah, carrying out building programs in those holy sites to establish hospitals, barracks and infrastructure in an attempt to aid the annual pilgrimage, Ḥajj and help reduce the severity of flooding in the region.

Abdul Hamid considered it his duty to aid Muslims outside of the Ottoman empire, supporting Muslims in Africa and Asia that were under European imperial control. Delegations were sent to Muslim kingdoms such as Zanzibar with gifts, asking them to acknowledge the Caliph as their protector against European imperialism. Similarly, delegations were sent to Muslims living in Russia and China with the same Objectives. In 1901, he sent one of his advisors, Enver Pasha along with numerous Islamic scholars as envoys who were warmly greeted by the Chinese government and the resident large Muslim population in China. Abdul Hamid also established a Muslim university in Beijing, the Peking Hamidiye University trying to create a sense of Islamic identity centred on the notion of a caliph and a united Muslim nation.

In the late 1800’s the Zionist movement began forming amongst European Jews. Interestingly, it was in Europe that this movement was born, where Jews felt they needed somewhere they could live without fear. The movement was not born in Muslim lands, where historically, they commonly migrated to, in order to escape European oppression. The unique financial and political power held by numerous Jewish families enabled Zionism to become a major force. Theodore Herzl, the founder of this movement, personally requested from Abdul Hamid II permission to establish the Zionist settlement in Palestine in exchange for 150 million pounds of gold, which would have been a significant contribution in repaying the enormous debts amassed by the Ottoman state. Abdul Hamid’s response was decisive:

“Even if you gave me as much gold as the entire world, let alone the 150 million English pounds in gold, I would not accept this at all. I have served the Islamic milla [nation] and the Ummah of Muḥammad for more than thirty years, and never did I blacken the pages of the Muslims – my fathers and ancestors, the Ottoman sultans and caliphs. And so I will never accept what you ask of me.”

He also prevented the purchase of land in Palestine by Zionist organisations, knowing that this would allow them to get a foothold in the country.

Abdul Hamid was eventually overthrown by a group called the Young Turks in 1909. These were European educated secularists who were opposed to the Islamic direction that Abdul Hamid had embarked upon during the years of 1876 to 1909. The Young Turks grasped controlling ministerial positions in the Ottoman government effectively making the next three caliphs weak puppets before the Caliph was abolished in favour of a new Turkish Government.

Abdul Hamid was the last person to hold power in the Muslim world that wielded power in the name of Islām. Since the secular disease took hold of Muslim nations, we have known nothing but misery and servitude. Unfortunately Abdul Hamid’s efforts were in the end too little too late. Latent disaffection in the empire proved a fertile bed for movements such as the Young Turks.

It is fitting that in light of this final swansong of the Ottoman Empire, we can appreciate the wisdom of ʿUmar b. al-Khattab. When travelling towards Jerusalem to receive the city from its inhabitants, he and his servant were taking turns on the mount that they shared between them. His servant, fearing that the Caliph of the Muslim world would not strike a significantly impressive figure if he were seen walking, urged him to take the mount. ʿUmar responded as follows:

Although over 100 years ago, these philosophies continue to echo and magnify to this day. The Young Turks movement was able to use the general social and economic dissatisfaction of the country to push through religious reform. This is mirrored in modern scenarios today; for example, the Tamarud movement in Egypt were able to play upon economic harp strings to justify a military coup.

The western influenced Young Turks movement has been used as a consistent model to tackle mainstream Islām over the course of the last century. Modern examples can be found internationally and locally. In January of this year, AbdulFatah Al-Sisi made a heavily propagated speech pushing the agenda for reform in the way that Islām is understood. According to one Israeli news website[1] “this professed goal is to purge the religion of extremist ideas of intolerance and violence that fuel groups like Al-Qaeda and the Islamic State.” The problem with statements like this is twofold. The first is that by issuing this kind of statement, Sisi has effectively acknowledged that these ambiguously funded organisations are a result of traditional Islām and this is in direct conflict with all credible Islamic scholars across the world.[2] The second issue with this statement is the notion that a secularist shift is a credible solution to solving national conflict and economic woe. It has long been suspected and in several cases proven that extremist movements such as Al-Qaeda and ISIS are driven less by misinterpretation of religion and more by personal economic gain. Boko Haram, the brutal organisation currently terrorising Nigeria are an interesting example of this. According to Baba Aye, a trade union educator and Deputy National Secretary of the Labour Party, is the National Convener of United Action for Democracy, the largest rights-based CSOs coalition in Nigeria:

“Boko Haram represents two contradictory developments, two contradictory phenomena. One is a reflection of the level of poverty, the level of disillusionment and discontent in the part of the country where you have–Boko Haram have their base. That is the northeast. The North Eastern part of the country has the highest poverty rate in the country, the highest level of unemployment in the country, and you have the highest proportion of children of school age out of school, elementary school, in the world in the northeast. And that is one aspect of it. And Boko Haram feeds on this discontent. It taps into this disillusionment with the system.

The second part is this: it’s also a reflection of elite politics played with the mask of ethnicity and religion, I mean, primordial sentiments, because while Boko Haram presented itself as some organization fighting against ostentatiousness, fighting against, I mean, Western civilization, in the sense of this being oppressive, so to speak, it also has close ties with ruling members of the state. And it’s rather unfortunate, but it is understandable, because this is part of a pattern that goes back to the decolonization process in the country, where you found different sections of the elites playing up primordial cards so as to be able to win sections of the masses to their side as they battled amongst themselves for who gets the lion’s share of access to the state treasury through access to state power.”[3] [4]

Similarly, ISIS has murky roots and since its inception, speculation has risen as to where its funding comes from.[5] On a local level, the Young Turks modern movement has taken the form of organisations which claim “to address the unique challenges of citizenship, identity, and belonging in a globalised world.”[6] However, these organisations and their representatives are well known amongst Muslims for being individuals who cannot be identified with, some being outright ex-Muslims.[7][8] The fact that the government seem to raise such organisations onto a public platform whenever Islām is put into the media spotlight is a sharp demonstration of a secular agenda being pushed onto the Muslim masses.

The reality is that the adoption of a secular mindset does not do anything to progress Muslim civilisation. The much lauded Ataturk period of Turkish History often neglects to mention the creation of an economic elite class and the influence and control of foreign investors within the country.[9] The reality is that socioeconomic development has always flourished under traditional Islamic rule. Easily accessible case studies include the period of time under the 2nd Caliph where effective governance was implemented through synergistic participation by various sectors including administrative, political and economic, focusing on several characteristics such as efficiency, honesty, equitability, transparency and accountability.[10] That period of time is identified as a golden generation of Islamic civilisation. Similarly, the academic achievements in science, medicine, mathematics and arts, which in many instances have paved the way to modern research, were products of Islamic caliphates starting with the Abbasid caliphate and then continuing through Andalusian Cordoba and the Ottoman Empire.

Muslims who are attracted to the notion of a secular shift should be wary of its backward motion that always leads to the depressing state we find ourselves in today.