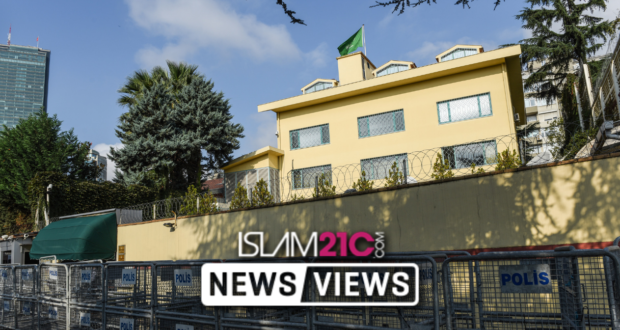 The video shows members of a Saudi hit team entering the Kingdom’s consul-general’s residence in Istanbul the same day the Washington Post journalist was murdered nearby in the consulate. [1]

In the video members of the squad appear to be holding bags which, according to Turkish media, may contain the body parts of Jamal Khashoggi, whose murder caused an international outcry and mass criticism of Saudi Arabia.

According to Al Jazeera, the video first appeared on Turkish news channel A Haber who sourced the footage from a journalist at the investigative unit at the Daily Sabah newspaper.

The writer was last seen entering the Saudi consulate in Istanbul on 2nd October in order to collect paperwork to marry his fiancé, who remained outside the consulate awaiting his return. He was never to be seen again. [2]

The story has developed almost every day since then, with Turkish media reporting on the 15-man “hit-squad” who arrived and departed Istanbul on the same day, and releasing horrific detail of what allegedly occurred to the critic of the Saudi rulers, including torture and dismemberment.

The official response from the Saudi authorities was to meet all accusations with blanket denial and refuse consulate access to Turkish investigators. As reported previously, consulate access was eventually granted, albeit after areas of the consulate were said to have been repainted, and a deep clean of the site carried out. [3]

Khalil Jahshan, an executive director at the Arab Centre in the US said that the release of the video was “very significant”. He told Al Jazeera:

“It adds another layer of the complexity to the continuing investigation in the murder of Khashoggi, in the sense that there is one significant remaining question: where is the body?”

“Now we have direct evidence showing that a van left the consulate office building, went to the nearby consul-general’s house, and you see staff or members of the killing team unloading body bags or black bags of some sort. So, it leaves the impression that Khashoggi’s body ended up at the consular’s residence and that’s what the investigation should focus now, what happened to it there.”

Saudi authorities have arrested five individuals who are suspected to be involved in the murder and have requested they face the death penalty.

Crown prince Mohammad Bin Salman has faced international isolation and pressure following the murder with many of his allies in the west convinced that he ordered the killing.

US president Donald Trump, however, has stood by Bin Salman and defended him against such allegations.

Trump has even gone against the CIA and US congress who say that based on factual evidence and the investigation carried out by Turkey that Bin Salman gave the order to kill Khashoggi and that he should be held personally responsible for the murder. [4]

Pressure continues to grow and it seems that the Turkish authorities are giving Saudi Arabia the opportunity to explain themselves rather than releasing the full details and evidence they may have.

Whilst some may have thought there would be media-fatigue some three weeks into the story, the case simply won’t go away; and all eyes remain on the monarchy to bring the real culprits to justice.

2018-12-31
News Editor
Previous: Controversial speech by US Secretary of State resurfaces on the internet
Next: Why the Muslim World is Silent Over China’s Repression of Uyghurs