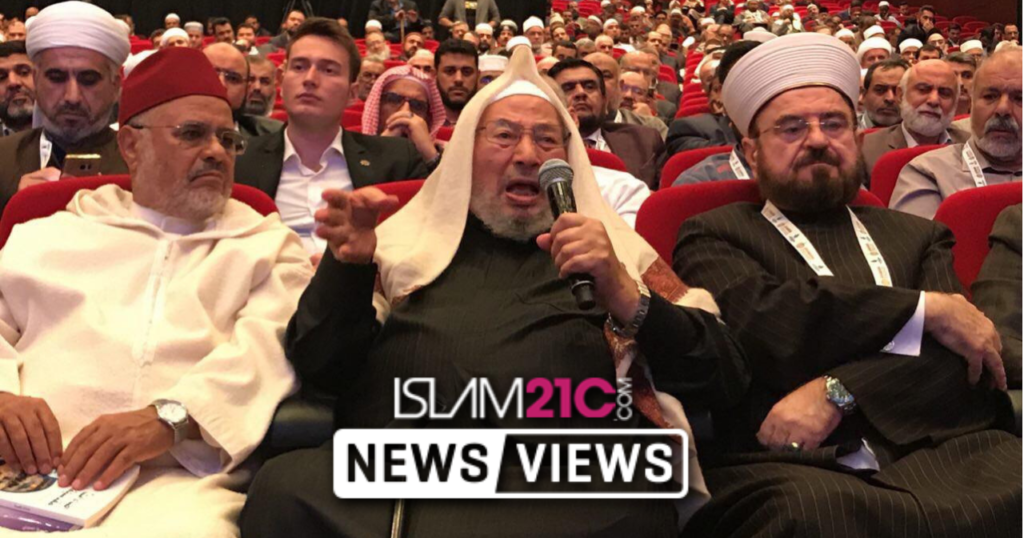 The International Union of Muslim Scholars (IUMS) held its fifth General Assembly in Istanbul on Saturday. The organisation—which brings together over 1500 Scholars from all over the world—elected a new Chairman, Sheikh Ahmed al-Raissouni, succeeding Sheikh Yusuf al-Qaradawi after announcing that this is the last time he will chair the meeting.

Sheikh Ahmed Al-Raissouni, who is an Islamic Scholar and Jurist, was elected as the new Chairman of the IUMS after winning 93.4% of the votes. Al-Raissouni is of Moroccan origin and was born in 1953. He was also the former Union’s vice president and a founding member. He was also a member of the Executive Council of the World Muslim Scholars Forum of the Muslim World League.[1]

The Sheikh has been vocal against the oppression faced by Muslims in Palestine by the Israeli Occupation and stood against the Military Coup in Egypt that resulted in the overthrow of the first democratically elected President, Mohammed Morsi, and the killing of over 1500 people in Rab’a Square, acknowledged as the most serious incident of mass unlawful killings in modern Egyptian history.

The International Union of Muslim Scholars, which was formed in 2004, is composed of Muslim scholars and works to serve Islamic issues. The Union says that it derives from Islam its approach, and is guided by it throughout all of its steps, and aims to represent all Muslims of all sects and denominations.[2]

The organisation is concerned with knowledge and Da’wah across the globe, and therefore is not a local or a regional union, neither an Arab nor a national one, neither an eastern, nor a western union; rather, it claims to represent all of the Muslims both within and outside the Islamic world.[3]

In his opening speech, Egyptian Born and Qatar-based Sheikh Yusuf Al-Qaradawi spoke about the Amanah (trust) that scholars must uphold in regard to spreading and calling people to Islam. Al-Qaradawi also spoke about the West’s plot against Turkey and Erdogan, stating that the Turks have been fought against because they defended the Islamic nation.[4]

Al-Qaradawi, who memorised the Quran at the age of 10 and graduated from the Faculty of Principles of Islamic Jurisprudence in 1953 at the top of his class, and has published over 120 books, and has received eight international prizes for his contribution to Islamic scholarship, [5] has lived in exile in Qatar for decades due to the tyrannical Egyptian regime, and also designated as a “terrorist” by the Saudi authorities. The Sheikh’s daughter has spent over a year imprisoned in solitary confinement in Egypt.[6]

Al-Qaradawi has been active in the Da’wah scene for decades, living by what he preaches, and working on being the moral compass for the Muslim community at large.