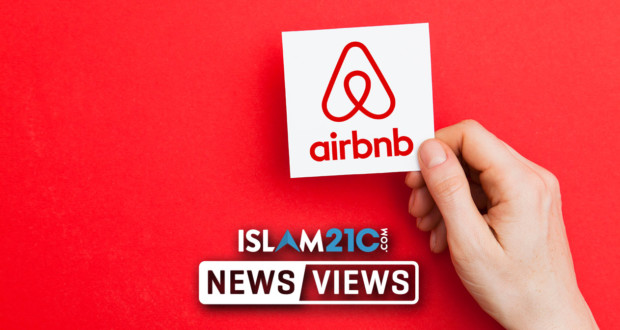 Airbnb are accused of aiding and perpetuating ‘Israeli’ military occupation in the occupied West Bank over its decision to not delist illegal settlements.

Palestinians have condemned Airbnb’s decision to not delist illegal Zionist settlements in the occupied West Bank.

In November 2018, the rental booking company said they would remove over 200 Jewish homes, that had been illegally built on Palestinian land, following protests from Palestinian rights supporters.[1]

However, on Wednesday, Airbnb announced that they “will not move forward with implementing the removal of listings in the West Bank from the platform”, after ‘Israel’ and the US filed law suits against the company.[2] The US lawsuit had accused Airbnb of violating the US housing discrimination law, as did the Israeli lawsuit.

The move has angered both Palestinians and human rights organisations, who say the reversal represents a capitulation of the company, and such a move is helping to perpetuate the illegal military occupation of the West Bank and the oppression of Palestinians. They have also denounced the company’s decision to not take profits from the illegal settlements. This has led to an outburst on social media, with Twitter users using the #stolenhomes hashtag to condemn the decision.

Disappointing @Airbnb decision reverses their stance to fully respect rights. Donating profits from unlawful settlement listings does nothing to remedy 'human suffering' they've acknowledged causing. By continuing to do business in settlements, they remain complicit in abuses. pic.twitter.com/0qAqgk5h7a

Saab Erekat, the Chief Palestinian Negotiator, said that Airbnb’s decision “signals the complicity of the company with the systematic denial of our inalienable right to self-determination”, and that its decision to not take profits “is nothing but a shameful attempt at whitewashing their complicity”.[2]

A 2016 report, published by Human Rights Watch, found that businesses and companies that relocate to the West Bank and operate in the illegal settlements significantly contribute to the mass human rights violations committed by the Israeli military occupations against the Palestinians.

“Such businesses depend on and contribute to Israel’s unlawful confiscation of Palestinian land and other resources, and facilitate the functioning and growth of settlements. The businesses also benefit from these violations, as well as Israel’s discriminatory policies that privilege settlements at the expense of Palestinians…”[3]

“By virtue of facilitating the settlement regime, settlement businesses, in Human Rights Watch’s view, contribute to the discriminatory system that Israel operates for the benefit of settlements. These businesses also directly benefit from these policies in myriad ways.”[3]

Furthermore, the Centre for Constitutional Rights, which has aided the Palestinian landowners whose properties had been illegally listed on the rental site, has condemned the move, accusing the company of caving in to the bullying of illegal settlers.

“In backing down from its decision not to list properties in occupied Palestinian territory, Airbnb is in breach of its international human rights obligations, and is discriminating against Palestinians”, the centre said in a statement.[4] They went on to add that “several of the Israeli-Americans who sued Airbnb helped establish the unlawful Jewish settlements in the West Bank in which the rental properties sit. They occupied the land with full knowledge that they were illegally constructed or seized.”[4]

Airbnb’s decision to reverse its earlier policy follows the re-election of Benjamin Netanyahu as prime minister for a fifth term.[5] Netanyahu is set to form a coalition made up of far-right parties and has promised to annex the West Bank.[6]

All ‘Israeli’ settlements in the West Bank are illegal under international law and have received unanimous condemnation from the international community, including the United States, Israel’s closest ally.[1]

The Oslo Accords, signed between Palestine and Israel in 1995, specifies that the West Bank and the Gaza Strip are for a future Palestinian state.[1]

However, under the premiership of Benjamin Netanyahu, settlement building has expanded immensely, and many Palestinian villages and towns have been, and continue to, be demolished, with thousands of Palestinians becoming homeless.[1]