The Sun to be investigated over “Nazi propaganda” against Muslims 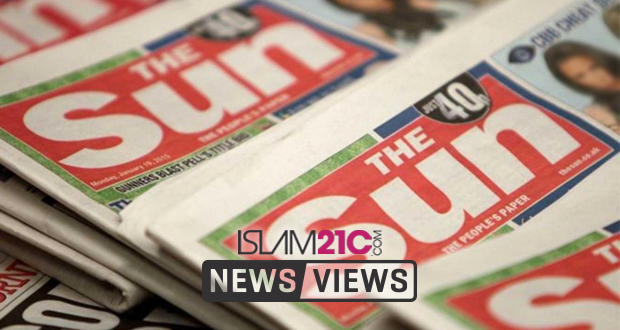 The press regulator has received over 150 complaints against a characteristically ignorant piece in The Sun, including joint complaints from Jewish and Muslim organisations, as well as a joint letter from 107 cross-party MPs voicing outrage.

The former political editor of the tabloid, Trevor Kavanagh, wrote a piece decrying “The Muslim Problem” in Britain, echoing the popular Nazi phrase “The Jewish Problem”.

Kavanagh tried to reinforce the common right-wing myth that the media establishment have been unable to talk about Islam and Muslims due to “political correctness”—despite desperately smearing Islam and Muslims at every opportunity for years, as pointed out by academics such as Rob Ford and Shenaz Bunglawala.[6][7]

A spokesman for the Board of Deputies of British Jews said:

“We were horrified to read this in The Sun today, and we feel that it warrants swift condemnation by Ipso, and a prompt retraction and an apology by The Sun. We will not tolerate indiscriminate attacks in the media on any faith community.”[8]

The joint letter signed by 107 MPs from Labour, Conservatives, Lib Dems and Greens was revealed by The Independent.[9] Jeremy Corbyn welcomed the letter saying that the tabloid had “published statements that incite Islamophobia and stigmatise entire communities.”

“That is wrong, dangerous and must be condemned, as Naz Shah’s public letter does in the clearest possible terms.”

However, many have expressed concern at the fact that Trevor Kavanagh himself sits on the Board of Ipso, the press regulator to whom people are complaining. There was outrage when he joined the board in 2015, since he has been responsible for The Sun’s infamous and despicable demonisation of Liverpool fans following the Hillsborough tragedy. Co-director of Hacked Off, Dr Evan Harris, said:

“It is hard to believe that any rational regulator would see fit to appoint someone directly involved in one of the most crass examples of press abuse in history.”[10]