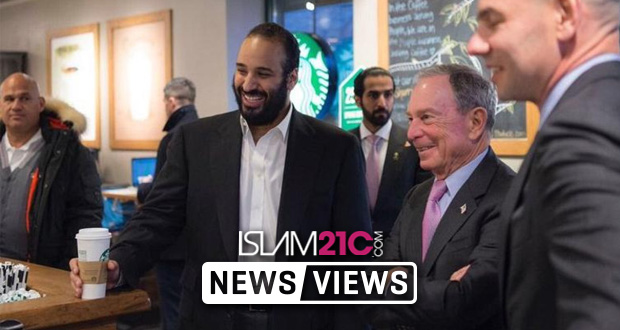 A leaked copy of the Saudi Crown Prince’s itinerary shows him meeting several right wing pro-Israel groups whilst in the US. Mohammad Bin Salman, pictured above with Michael Bloomberg, also shook hands with leaders of several groups who have donated millions to illegal settlement building and the fight against the BDS (boycott, divestment and sanctions) movement. These groups include AIPAC, Stand up for Israel, and the Jewish Federation for North America – who donated 6 million dollars to illegal Israeli settlements between 2012 and 2015. [[1]]

BDS is a non-violent movement which seeks to place economic pressure on Israel to provide equal rights to Palestinians and thereby end the existing system of apartheid. However, according to Ha’aretz, the Crown Prince met with other organisations, including B’nai B’rith and the American Jewish Committee who have long targeted BDS. [[2]]

On March 30th 1976, Israeli forces shot dead six Palestinian citizens of Israel after they protested the Israeli government’s appropriation of thousands of donums of Palestinian land. [[4]] Since then, Land Day has become an important commemorative event in the Palestinian calendar, reminding current generations of the sacrifices of previous ones and encouraging future generations to continue the resistance. [[5]]

Adalah, a legal centre for Palestinian rights in Israel, condemned the Israeli army’s use of force, calling it a violation of international law:

“Live gunfire on unarmed civilians constitutes a brutal violation of the international legal obligation to distinguish between civilians and combatants.” [[6]]

“People in occupied Palestine are disappointed that the Security Council met, but did not take action yet to stop this massacre and to hold those responsible to account.”

MBS has been credited for major changes in Saudi Arabia, including the arrest and imprisonment of hundreds of the Kingdom’s scholars and male and female activists. Amongst some of the prominent scholars and academics arrested by the Saudi authorities include: Sheikh Muhammad Saleh al-Munajjid, Dr. Mohammad Musa al-Sharif and Sheikh Salman al-Awda. [[8]] [[9]] According to NBC News, citing 14 current and former US senior intelligence officials, MBS had allegedly previously also placed his own mother under house arrest. [[10]]

[4] A measure of land, used in Ottoman times, usually less than an acre