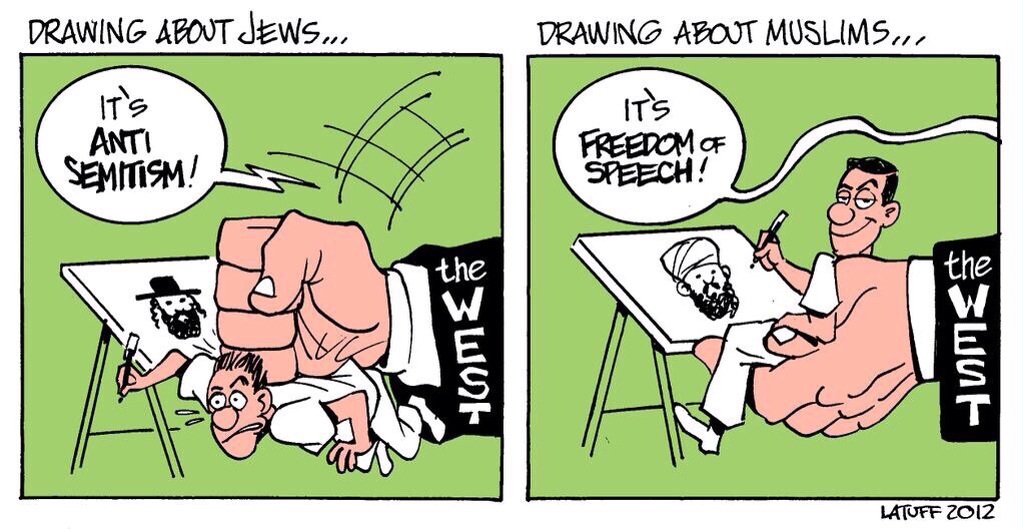 Let us leave aside what occurs closer to home where allied British and American Troops are repeatedly bombing and killing Al-Jazeera journalists. Let us look past the locking up of Moazzam Begg for exposing British collaboration with the Syrian regime in torture, or even Edward Snowden and Julian Assange‘s ‘freedom of speech’. It remains very obvious for those informed that freedom of speech does not exist anywhere in the world if it does not suit the ruling paradigm or ideology.

France’s (and the West’s) claim that free expression is a ‘fundamental principle’ is a myth, an opiate of the masses, explicitly invoked for anti-Semitic purposes in the years leading up to the holocaust, and has recently been used to whip up hatred of immigrants, ethnic minorities and Muslims. As everywhere else in the ‘Free World’, in France, free expression is for some but not others:

1. A French court injunction banned a Jesus based clothing advert mimicking Da Vinci’s Last Supper. The display was ruled “a gratuitous and aggressive act of intrusion on people’s innermost beliefs”, by the French judge.[1]

2. In 2005 ‘Aides Haute-Garonne’ organized an informative evening about the prevention of the HIV-AIDS. The prospectus contained a head-and-shoulders image of a woman wearing a nun’s bonnet and two pink condoms. On the grounds that the prospectus insulted a group because of its religion, a court convicted Aides Haute-Garonne.

3. In 1994 Le quotidien de Paris published the article L’obscurité de l’erreur by journalist, sociologist, and historian Paul Giniewski. The article criticises the Pope, and states that Catholic doctrine abetted the conception and the realisation of Auschwitz. A court upheld proceedings on the ground that the article was an insult to a group because of its religion, and convicted the newspaper.

4. ‘Charlie Hebdo Magazine’ itself censored, apologised and then fired longtime cartoonist Siné for a caricature insulting the son of former president Nicholas Sarkozy and his wife Jessica Sebaoun-Darty, while staunchly standing on their ‘right’ to repeatedly troll Muslims, minorities and immigrants e.g. by showing a caricature of a stereotypical Arab whom they imply to be the Prophet Muḥammad (sall Allāhu ʿalayhi wa sallam) naked and bending over – which tells you something about the brand of satire they practice and that they would rather be aiming downward than upward.[2]

5. Dieudonné M’Bala a French comedian and satirist – was convicted and fined in France for describing Holocaust remembrance as “memorial pornography”.[3]

6. The ‘Quennele’ hand sign has been described as anti-establishment and anti-zionist by French youth and famous football players (e.g. Anelka). It stoked serious controversy in France since first being used by anti-establishment comedian Dieudonné M’Bala M’Bala in 2005.  M’Bala has been barred from many theatres and convicted many times for his ‘freedom of speech.'[4]

7. As part of “internal security” enactments passed in 2003, it is an offense to insult the national flag or anthem, with a penalty of a maximum 9,000 euro or up to six months’ imprisonment. Restrictions on “offending the dignity of the republic”, on the other hand, include “insulting” anyone who serves the public.

8. French Rap Star Facing Prison for Insulting the French State, insulting Napoleon and Charles de Gaulle.[5] It is illegal to insult the French state and it seems historical characters like Napoleon and Charles De Gaulle are sacred. But Muḥammad (sall Allāhu ʿalayhi wa sallam), the leading light and ideal of divine justice for 1.5 billion people is open to criticism?

9. Nicolas Sarkozy, then-Interior Minister and former President of the Republic until 2012, ordered the firing of the director of Paris Match — because he had published photos of Cécilia Sarkozy (his wife) with another man in New York.

12. Under France’s “Public Health Code” passed on the 31 December 1970, “positive presentation of drugs” and the “incitement to their consumption” stipulates five years in prison and fines of up to €76,000. Newspapers such as Libération, Charlie Hebdo and associations, political parties, and various publications criticising the current drug laws and advocating drug reform in France have been repeatedly hit with heavy fines based on this law.[7]

13. Muslim women are barred from education (No, not just by the Taliban) in France, if they practise their religion by wearing a headscarf, despite French schools having no policy on uniforms, neither are crosses on necklaces allowed.

14. “France’s law against “religious symbols in public spaces” is specifically enforced to target Muslim women who choose to wear hijab—ironic considering we are now touting Charlie Hebdo as a symbol of France’s staunch commitment to civil liberties.”[8]

15. It is illegal in France to take the opinion of the Turkish side on the then civil war involving Armenians. It is illegal to deny that the killing of Armenians by Turkish troops was a deliberate genocide.

16. In 2007, a tribunal in Lyon sentenced Bruno Gollnisch and fined him €5,000 for the offense of contesting some of the information about the Holocaust and ordered him to pay €55,000 euros in damages to the plaintiffs and to pay for the judgment to be published in the newspapers that originally printed his remarks.

British Freedom of Speech Evangelicals seem to be silent when it comes to the freedom of speech of Muslims:

“So for example, when a Muslim decided to burn a poppy on the streets of London – an act which physically harmed nobody – they demanded the individual responsible be prosecuted (he was) and remained noticeably silent about the death threats directed towards him as a result of his exercising his right to free speech and expression. Similarly when a group of Muslims held a peaceful – if vocal – protest against British military returnees from Afghanistan it seems that suddenly the “right to offend” was no longer sacrosanct.”[9]

Just to be clear about what the Charlie Hebdo magazine was about, I would like to quote some left-wing, liberal, socialist, atheist folks, because I am sure if an Islamist said the below he would end up on a list somewhere under the British Stasi ‘PREVENT’ spying and thought police programme:

“Charlie Hebdo has facilitated the growth of a form of politicized anti-Muslim sentiment that bears a disturbing resemblance to the politicized anti-Semitism that emerged as a mass movement in France in the 1890s.

In its use of crude and vulgar caricatures that purvey a sinister and stereotyped image of Muslims, Charlie Hebdo recalls the cheap racist publications that played a significant role in fostering the anti-Semitic agitation that swept France during the famous Dreyfus Affair, which erupted in 1894 after a Jewish officer was accused and falsely convicted of espionage on behalf of Germany. In whipping up popular hatred of Jews, La Libre Parole [“Free Speech”], published by the infamous Edoard Adolfe Drumont, made highly effective use of cartoons that employed the familiar anti-Semitic devices. The caricatures served to inflame public opinion, inciting mobs against Dreyfus and his defenders, such as Emile Zola, the great novelist and author of J’Accuse.”[10]

Lastly on the role of satire, it needs to be responsible:

“The whole reason the concept of responsible satire has been summed up as “punch up, don’t punch down” is to acknowledge that not all your targets of satire start out on an equal footing. Francois Hollande is not on the same level as girls who have been kidnapped into sexual slavery, and having the same “no-holds-barred” attitude toward them both is not the same as treating them fairly. {Charlie Hebdo had a front page cartoon about Nigerian Muslim schoolgirls kidnapped, raped and impregnated by terrorists depicted as ‘benefits scroungers pregnant with more benefits scroungers’ – feeding into that now popular stereotype about black immigrants sucking the ‘white’ state’s finances dry.}

The situation of the Muslims in France right now is rather dismal. The scars of the riots nine years ago are still fresh for many people, Muslims make up 60 to 70 percent of the prison population despite being less than 20 percent of the population overall, and France’s law against “religious symbols in public spaces” is specifically enforced to target Muslim women who choose to wear hijab—ironic considering we are now touting Charlie Hebdo as a symbol of France’s staunch commitment to civil liberties.”[11]