We are not Charlie 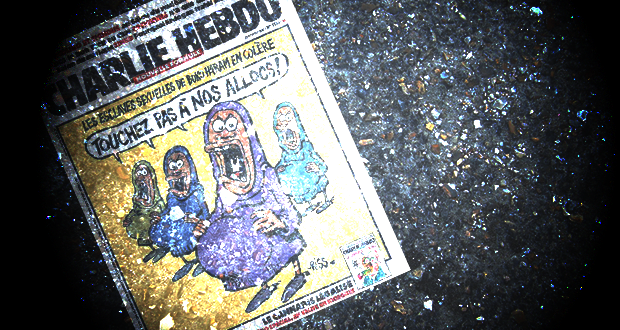 Following the horrific murders of police and journalists in Paris on Wednesday, Muslim communities in Europe are facing the inevitable consequences. Mosques in France have been attacked and Muslims in Europe are feeling further reverberations, evident in criticisms of their supposed contention with freedom of speech, whilst governments continue to justify tightening measures that will ironically restrict freedom of speech amongst Muslims who condemn foreign policy.

The dominant voices in the mainstream media are focusing on perpetuating myths about a clash of civilisations: the Western ideals of freedom of speech vs the barbaric repression of the (Muslim) Other. Social media is abound with calls to ‪#‎KillAllMuslims, whilst all Muslims are expected to apologise, yet again, for the individual evil actions of murderers, and call out loudly ‪#‎NotInMyName, else their silence will be subject to scrutiny and suspicion and branded as complicity. At such times it is the Muslims who are always expected to apologise, a point frequently argued by Muslims and non-Muslims alike.

Whilst the cartoonists at Charlie Hebdo have been elevated as martyrs, there are a minority of voices passionately challenging the mainstream media’s self-interested fixation with promoting outrage at the censorship of “free speech”. Yet the well-known adage comes to mind: with freedom of speech comes responsibility. The satirists at Charle Hebdo were irresponsible and ruthless in exploiting already marginalised communities, and did not recognise that satire is supposed to hurt the powerful and not the powerless. Fortunately there are some minority voices countering the mainstream media’s narrative of “anti-censorship at all costs”, voices like Jacob Canfield who argues:

“…the editorial staff of Hebdo consistently aimed to provoke Muslims. They ascribe to the same edgy-white-guy mentality that many American cartoonists do: nothing is sacred, sacred targets are funnier, lighten up, criticism is censorship. And just like American cartoonists, they and their supporters are wrong. White men punching down is not a recipe for good satire, and needs to be called out. People getting upset does not prove that the satire was good. And, this is the hardest part, the murder of the satirists in question does not prove that their satire was good. Their satire was bad, and remains bad. Their satire was racist, and remains racist.”

Anti-censorship bloggers are even highlighting the complexities of uncritically declaring ‪#‎JeSuisCharlie when the magazine was infamous for inciting hatred against Muslims:

“…I understand why a culture that is being systematically and individually mistreated and ignored by the privileged in power may eventually spawn some folks who resort to violence doesn’t mean I condone that violence! It means I can see why decades of hurt, fear, and institutionalized abuse may lead to a violent reaction. Understanding is not supporting, it simply means I can connect the dots. Can you not?!?

What I find incredibly disappointing is that on my social media, I see a bunch of white people “standing up” for the “bravery” of a racist magazine to incite hatred against people of colour. I have seen next to nothing about the bombing of the NAACP by a white man on our own soil. I see anti-Muslim protests being started in Europe, and people calling for the genocide of Muslims on Twitter, but very little attention to the number of Muslims who condemned the violence.”

Thus ideas about free speech and satire are impacted upon by who has the power to profess when free speech is acceptable and when it becomes offensive, and there will always be those who are powerless to fight back against what they deem to be offensive.

Some are highlighting how it is troubling to elevate Charlie Hebdo as a magazine representing European freedom of speech when the themes involve Islamophobic and xenophobic ideas of Muslims in cartoons. Where are the boundaries between grossly mocking the tragedies impacting upon people’s lives and freedom of speech? One example is the disturbing depiction of the girls kidnapped and raped by Boko Haram as happy recipients of welfare benefit. How would the families of the girls who are kidnapped respond to this “humour”? Another example discussed on social media questioning what is sacrosanct is the cartoon about the protestors murdered in Rabaa Square in Egypt. Again, how would those impacted by the massacre in Rabaa Square feel about this “humour”? Would it be humorous to create satirical representations, and have a sense of humour, about the evil massacre that took place at the Charlie Hebdo offices? Would Muslim writers be allowed to satirise the tragedy of journalists and cartoonists murdered as they went about their daily lives?

It goes without saying that such distasteful and consistent ridicule in the form of satire does not justify murder. Murder as a result of an individual vendetta is not acceptable in any society. The law should never be taken into your own hands. No one is born with the God-given right to take lives even if you are offended or oppressed. One cannot be judge, jury and executioner. Yasir Qadhi argues: “At the same time, it is also idiotic to continue provoking a group of people who have a long list of their own internal and external political and social grievances that stretch back for many decades (here I mean the N. African Muslim population of France), and then expect that nothing will happen.” Muslims should nevertheless deal with insults by drawing on their religion which teaches patience and defence in non-violent forms in such a scenario.

Surely this sad episode of the taking of lives should help us realise that “Freedom of Speech” cannot equate to uncensored “Freedom to offend”. This notion of free speech would never work out between two individuals let alone a cultural norm affecting millions of people. A more appropriate, more human manifestation of freedom would have been ‘the right to be offended’. As one Islamic Preacher, Ustadh Shams Adduha Muhammad states: “I express my ‘freedom to be offended’ at the very idea that humanity could defy its intelligence and come up with something as stupid as ‘the freedom to insult’”.

Double standards and hypocrisy is at play when it is seen as anti-semitic to create cartoons that affect the Jewish communities, and the mainstream media is made to apologise. However, cartoons about Muslims, against Muslims and attacking Muslims are socially acceptable and quite the norm. In August 2014, the Australian newspaper Sydney Morning Herald was made to apologise for showing a cartoon of a Jewish man with a hooked nose watching Gaza bombed as he sat in the comfort of his armchair, for the cartoon was deemed as “anti-semitic”. And yet the cartoon was based on the many social media photographs about a real-life episode that had gone viral showing Israelis sitting on a hilltop snacking and watching the bombing of Gazans. Even Charlie Hebdo itself, in 2009, fired a cartoonist who offended Jewish communities with a cartoon about the engagement of Nicholas Sarkozy’s son to a Jewish woman that was deemed “anti-semitic”.

Some are arguing that religious teachings should not be immune from criticism. As Muslims, we would agree, but there is a world of difference between criticism and outright offensive mocking, ridicules and insults. As Muslims, we are taught to accept critique. It is something that Muslims have faced for over 1400 years, just a cursory look into the works of Shaykh al-Islām Ibn Taymiyyah, Imām al-Ghazāli, Imām Abū Hanīfa, Ibn Khaldun and other great scholars demonstrates how Muslims have dealt with criticism in a positive and intellectual way. Muslims are definitely not a people who have a problem with critique. Critique is what drives us forward and helps us to progress as a civilisation. The neo-Cons and the far left liberals should not be disingenuous by conflating this point.

Freedom of speech is not an unrestricted privilege. The existence of laws covering defamation, treason, public disorder, holocaust denial, and race hate is further proof of the flawed concept of unrestricted freedom of speech and the right to offend. Such laws clearly demonstrate that Freedom of speech should not be abused and should not be used as a smokescreen to incite hatred against any particular racial or religious group. This is precisely what occurs whenever you embark on a sustained campaign of mocking and ridiculing. We should recognise it for what it is – the relentless demonisation of a specific religious minority. The Nazis used a similar tactic through the propaganda in their media and through the arts to demonise and dehumanise the Jews, eventually these “humorous” caricatures led to atrocious genocide of a people.

Similar tactics of demonising and dehumanising a community are currently prevalent through the way the media represent Muslims in news programmes and even “fictional” television programmes, for example Homeland or 24, which characterise Islām and Muslims as either violent, bloodthirsty and primitive others, if they are not the “good” Muslims who have abandoned their identity and values.

Constant demonisation leads to conditions where people accept as the norm a different standard for the others. We are currently seeing this around the world in the hatred spewing against the Muslim communities: the blood of a Muslim is insignificant due to the constant virulent Islamophobic narrative which subsequently directly translates to the justification of violence against Muslims, be it a Western (or Israeli) army against a civilian Muslim nation or thuggish far-right groups in countries around the world where Muslims are a minority. The inevitable consequence of such actions is a violent blowback from those who take the law into their own hands. No religious teachings will stop this minority who hold grievances of desperation and devastation.

The mainstream media is exploiting the discourse on “freedom of speech”, whilst I would argue, alongside others, this is not about satire and freedom of speech. This made evident with one of the alleged attackers’ previous conviction where he cited he had been traumatised by the abuse of Iraqis by US personnel at Abū Ghraib. Action is urgently needed to stop the causes of this cycle of violence and subsequent violent responses by openly addressing the Islamophobic narratives at play, instead of dismissing these brutal encounters as the “civilised” Occident encountering the “barbaric” Orient.

An early version of this article was published on The Sociological Imagination on Thursday 8 January 2015 citing more examples of the counter-narratives regarding #JeSuisCharlie. See http://sociologicalimagination.org/archives/16665“

Sadia Habib taught English at Key Stages 3, 4 and 5. She is a PhD candidate in Educational Studies at Goldsmiths University of London. She is also an editor for The Sociological Imagination.

Sadia Habib taught English at Key Stages 3, 4 and 5. She is a PhD candidate in Educational Studies at Goldsmiths University of London. She is also an editor for The Sociological Imagination.