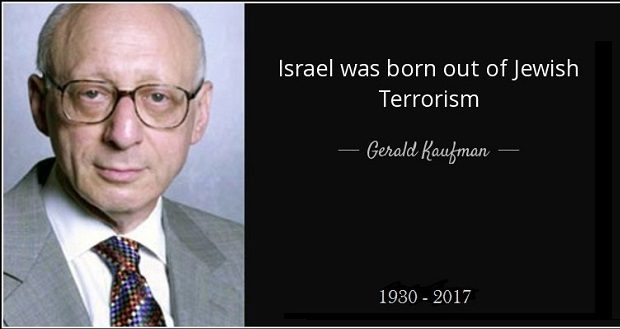 Britain’s oldest serving MP, Labour’s Sir Gerald Kaufman, died last night at the age of 86. Kaufman was distinguished due to the fact that he was both Jewish and an outspoken critic of the criminality of the state of “Israel”.

He was born in Britain to Polish Jewish immigrants and raised as an orthodox Jew. He became an MP in 1970 for constituents in Manchester. Over the years, he became well known for using his voice and position to call for justice for Palestinians, sanctions against “Israel” and generally raising awareness of atrocities the state of “Israel” committed against non-Jews, betraying the true teachings of Judaism.

In 2002, for example, he branded Ariel Sharon a “war criminal” and a “fool” who had reduced the country to an “international pariah”, “staining the Star of David with blood” when ordering his troops to use “methods of barbarism against the Palestinians.” [1]

“It is time to remind Sharon that the star of David belongs to all Jews, not to his repulsive Government. His actions are staining the star of David with blood. The Jewish people, whose gifts to civilised discourse include Einstein and Epstein, Mendelssohn and Mahler, Sergei Eisenstein and Billy Wilder, are now symbolised throughout the world by the blustering bully Ariel Sharon, a war criminal implicated in the murder of Palestinians at the Sabra and Shatila camps and now involved in killing Palestinians once again.”

Being the descendent of Jews that were killed by Nazis, he would compare the Zionist state to Nazis in their treatment of people of the “wrong race”; and would compare the Jews fighting for their lives during Nazi reign to the Palestinians fighting for their lives today. He delivered a blistering speech in the House of Commons protesting one of the routine assaults on Gaza by the Zionist state:

“My grandmother was ill in bed when the Nazis came to her home town of Staszów. A German soldier shot her dead in her bed. Madam Deputy Speaker, my grandmother did not die to provide cover for Israeli soldiers murdering Palestinian grandmothers in Gaza. The present Israeli government ruthlessly and cynically exploit the continuing guilt among Gentiles over the slaughter of Jews in the Holocaust as justification for their murder of Palestinians. The implication is that Jewish lives are precious, but the lives of Palestinians do not count. On Sky News a few days ago, the spokeswoman for the Israeli Army Major Livovich was asked about the Israeli killing of, at that time, eight hundred Palestinians. The total is now a thousand. She replied instantly, “Five hundred of them were militants.” That was the reply of a Nazi. I suppose the Jews fighting for their lives in the Warsaw Ghetto could have been dismissed as militants.” [2]

When confronted with apologists for Israeli crimes citing “terrorism” or “Hamas rockets”, he would openly refute the fallacious arguments for continuing and escalating the extermination of Palestinians:

“We had an IRA bomb in Manchester which destroyed much of the centre – we didn’t send troops over to Belfast to murder 1,000 Catholics.” [3]

This was a person who used his privileged position to speak out against people twisting the holocaust to commit murder and violence against others. As the generations pass, fewer and fewer people will be able to do this, especially due to the growing influence of Israel and potential subversion of British democracy that was exposed recently. [4]

Sir Kaufman’s being Jewish himself and his family being killed by Nazis was not enough to spare him the smearing and abuse from Zionist lobbies and activists,[5] so the pressure is even higher on non-Jews speaking out against Israel’s crimes – which has become one of the indicators of “extremism” according to recently reported Prevent training. [6]

It appears that the government’s controversial new definition of anti-Semitism is being incorporated into “extremism” discourse, particularly those elements calling out the racism of the Israeli “state”, which has consequently stifled much pro-Palestinian activism and come under criticism from Jews and non-Jews alike. [7][8] Indeed, a growing number of Universities have also been reported to be cancelling this year’s Israeli Apartheid Week, [9] due to take place on university campuses across the globe across March and April. [10]

In such a precarious and volatile time, there is an increased moral obligation on those who are able to speak out for those without the privilege or power. Who will fill gap left by the likes of Gerald Kaufman?

Who is the Real Threat to British Democracy? by Quratulayn Haamidah