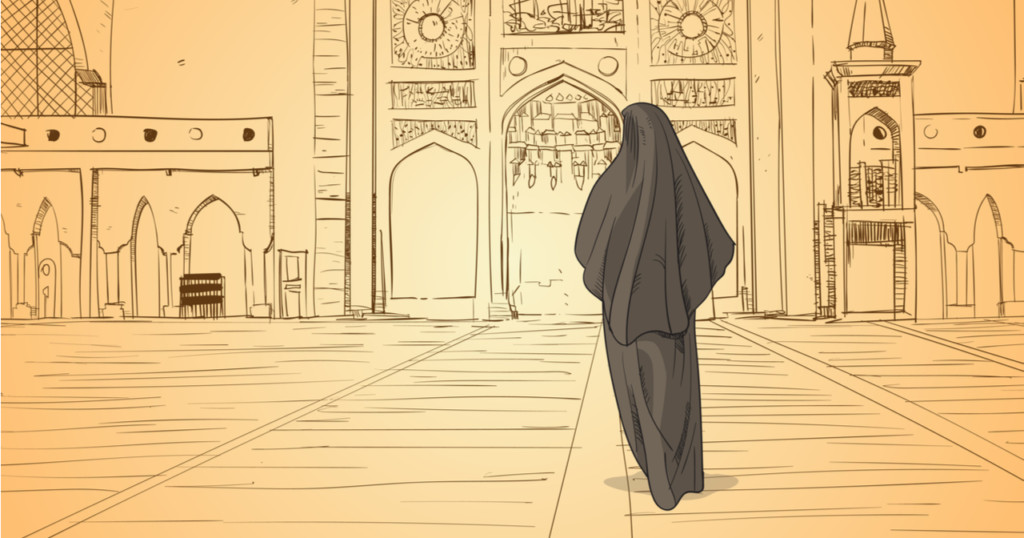 In this final part of our short study of Sūrah al-Tahrīm, Allāh (subḥānahu wa taʿālā) presents historical examples of women whom we can take heed and learn many lessons from.

“Allāh presents an example of those who disbelieved: the wife of Noah and the wife of Lot. They were under two of Our righteous servants but betrayed them, so those prophets did not avail them from Allāh at all, and it was said, ‘Enter the Fire with those who enter.’”

Lesson 19: Righteous company will not automatically save you from the Fire

Allāh (subḥānahu wa taʿālā) begins with the description of two of the worst women in history: the wife of Prophet Nūh (ʿalayhi al-Salām)  and the wife of Prophet Lūt (ʿalayhi al-Salām). These wives were traitorous towards their husbands and rejected Allāh and his guidance. Allāh (subḥānahu wa taʿālā) describes the prophets as slaves, generalising the context of the verse so that it can be a lesson for all believers, as slaves of Allāh, to learn from.

The lesson being: when Allāh’s punishment comes, no one will be able to shield you from it. Many of us perceive that a righteous spouse will be our ticket to Paradise, or what we lack in obedience may be compensated for through the actions of our pious ancestors… but Allāh (subḥānahu wa taʿālā) reminds us time and time again of a Day when no misdeed will go unaccounted for and no one will be able to intercede for another. If being married to the Prophets of Allāh was not enough to give these women a ‘get out of jail free’ card, then what about us? Allāh even explicitly says, “And it was said, ‘Enter the Fire with those who enter’”. Not only will such people enter the Hellfire, but they will enter in the exact same way as the rest of the disbelievers and criminals, with absolutely no special treatment.

“And for the believers, Allāh has set an example in the wife of Firʿāwn (Pharaoh), who said: ‘My Lord! Build for me, next to you, a house in Paradise, deliver me from Firʿāwn and his misdeeds, and save me from the wrongdoing people.’”

Lesson 20: Keep your eyes on the Hereafter

Allāh (subḥānahu wa taʿālā) now describes the first of two righteous women made mention of in this chapter, as an example for the believers to follow. Her name was Āsiyah (raḍiy Allāhu ʿanhā), the wife of the evil tyrant, Firʿāwn, a man who displayed the peak of arrogance by claiming he was God:

Despite this, Āsiyah (raḍiy Allāhu ʿanhā) was a woman of strong Īmān and her faith in Allāh (subḥānahu wa taʿālā) did not waver. Although she initially kept her faith in Allāh hidden from Firʿāwn, he eventually found out and pleaded with her to reject Him (subhānahu wa ta’ālā), and instead accept him (Firʿāwn) as the ruler of everything by spoiling her with gifts. But she refused. This led Firʿāwn and his men to peg her down and torture her with the heat of the sun, and as she did this, the angels descended to shade her with their wings. This is when she proclaimed, “My Rabb! Build for me, next to you, a house in Paradise.”

Despite having the pleasures of this world presented to her as gifts and facing severe torture, she was able to remain firm, and did not renounce Islām as her faith and Allāh (subḥānahu wa taʿālā) as her Lord. She was eventually killed, but her heart was always yearning to be in Paradise, close to the ʿArsh (throne) of Allāh.  From this we learn:

We can get through a lot of pain and suffering in this life if our eyes are pegged on the home of the Hereafter.

Lesson 21: The effects of righteous upbringing

Allāh (subḥānahu wa taʿālā) presents a heart-warming yet subtle parallel to the overarching theme of this Sūrah when he mentions the words that Āsiyah (raḍiy Allāhu ʿanhā) used in her supplication: “and save me from the wrongdoing people.” The only other place in the Qur’ān where this Duʿā is made is when Mūsā (ʿalayhi al-Salām) heard the frightening news that the chiefs were conspiring to kill him, and thus he cried out in the same way; “My Lord, save me from the wrongdoing people.”[2] Āsiyah was the foster-mother of Mūsā (ʿalayhi al-Salām), and raised him in his childhood; thus, a beautiful example is given of the effect of the righteous upbringing of children (tarbiya al-awlād).

“Another example is in the life of Maryam, the daughter of `Imrān, who guarded her chastity, and into whose womb We breathed of Our spirit, who testified to the words of her Rabb, and His scriptures, and was one of the obedient.”

When we examine the lives of the most righteous and highly-ranked women in Islam, it becomes clear which characteristics earned them such a noble status. It was narrated by Ibn ʿAbbās, that the Prophet (sall Allāhu ʿalayhi wa sallam)  said: “The best of the women of Paradise are Khadījah b. Khuwaylid, Fātimah b. Muhammad, Āsiyah b. Mazāhim (the wife of Pharaoh), and Maryam b. ʿImrān.”[3]

Maryam (raḍiy Allāhu ʿanhā) is the only woman mentioned by name in the Qur’ān and the only woman who has an entire chapter named after her. She is described not just as a ‘qānitah’ (obedient female slave), but as from the ‘qānitīn’ (obedient slaves) because she is ranked at the top from amongst both the women and the men.

She was a modest and bashful lady and devoted her entire life to the worship of Allāh (subḥānahu wa taʿālā). Although she was unmarried, she miraculously gave birth to ʿĪsā (ʿalayhi al-Salām). Accused of losing her chastity, she was tested with that which she had protected herself from the most. Twice in the Qur’ān, Allāh (subḥānahu wa taʿālā) praises Maryam (raḍiy Allāhu ʿanhā) as “the one who guarded her private parts”.[4] Despite the difficulty of the trial, she wholeheartedly submitted to the decree of Allāh and remained patient.

Khadījah (raḍiy Allāhu ʿanhā) was the first woman to accept Islām. When the Prophet (sall Allāhu ʿalayhi wa sallam) first received revelation, he was frightened and thought that he had gone mad. The first person he turned to and sought solace from was his wife, Khadījah. She responded to him in the most appropriate manner, supporting him and reassuring him with words of comfort: “By Allāh, Allāh will never disgrace you!”[5]

The mutual trust, confidence, and loyalty in the relationship between her and the Prophet (sall Allāhu ʿalayhi wa sallam) is something to aspire to.

The daughter of the Prophet (sall Allāhu ʿalayhi wa sallam), Fātimah (raḍiy Allāhu ʿanhā), is renowned for the admirable relationship she shared with her father. As a child, she would rebuke the Quraysh for the maltreatment of her father.  After the death of her mother, Khadījah, she cared for and loved her father so devoutly that she was nicknamed Umm Abīhā – the ‘Mother of her Father’. Growing up, she heard and saw women hurling rubbish and bad mouthing her noble father but was never frightened or disheartened. Instead, she was a great source of comfort for the Prophet (sall Allāhu ʿalayhi wa sallam).

As for ‘Āsiyah (raḍiy Allāhu ʿanhā), we have already spoken of her virtue as she remained devout to Allāh in the face of an oppressive husband, and also as she provided a righteous upbringing for her foster-son, Mūsā (ʿalayhi al-Salām).

When looking into the lives of these noble women, we learn that their virtue was found in:

We pray that Allāh (subḥānahu wa taʿālā) allows us to benefit from His majestic words and enables us to implement the many lessons discussed in this Sūrah. Āmīn.