Back in Britain, Alim Hasan Islam recounts various intriguing aspects of his experience at the Qatar World Cup in this final piece that ends a special series on the most prestigious football tournament on the planet
Opinion 09/12/2022No Comments10 Mins ReadBy Alim Hasan Islam 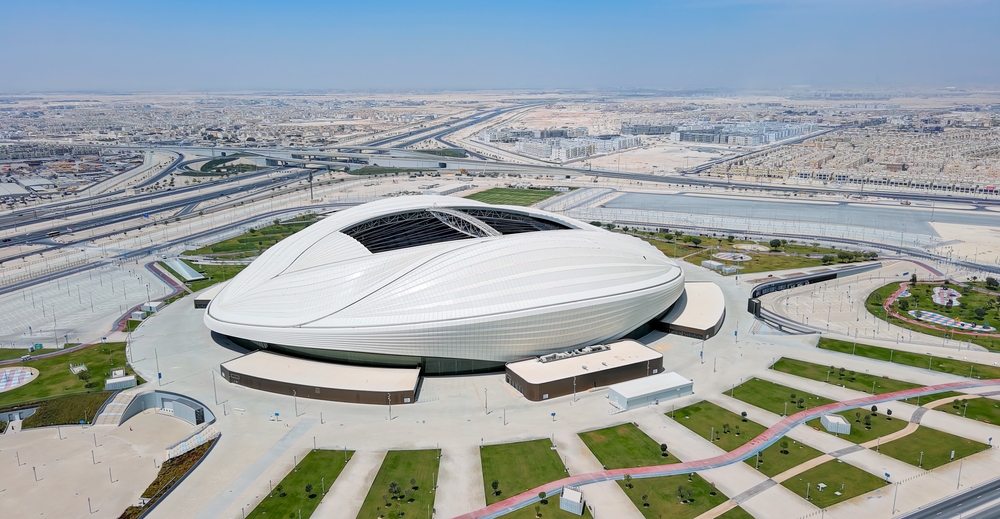 Aerial view of al-Janoub Stadium, one of the eight venues for this year's World Cup. Photograph credit: Tomacrosse / shutterstock.com

I am back in cold, wet, dreary England, away from the glorious sunshine of Qatar. I’ve written a lot about my time at the World Cup but thought it would be good to write a reflection piece. With the break between matches, the gap between the round of 16 and the quarterfinals is the first time there has been no football, so now was an opportune time.

The first place to begin would be the hospitality of the people in Qatar, be it the native Qataris or migrant workers. Throughout my journey, every time I entered a public place, a shop, restaurant, the Metro, or elsewhere, I was always greeted with “Hello, welcome”. I’ve seldom seen the consideration for guests elsewhere.

Whenever I went to my apartment, the security always opened the door with a smile and, of course, said “Hello, welcome”. My brother even said that they didn’t need to open the door for us but regardless of what time it was, whether early in the morning at Fajr or late at night, someone was always there to open the door.

My experiences while dining were similarly accommodating.

We ate out a lot while in Qatar. Yes, we did the whole “trying franchises found in the West but are actually halal” thing while in a Muslim country. I wrote about how I was disappointed by a particular franchise, I wasn’t loving it. However, other well-known brands were great, in particular a place that sells one of the best cheesecakes I’ve ever had.

As for the local cuisine, I was surprised by the generous portion sizes. There was one particular meal that I haven’t previously spoken about, we had a variety of meats including camel and chicken with Arab rice. The plenteous amounts of rice couldn’t be finished in one sitting. I’m someone with a huge appetite and was shocked to see food left over.

Moreover, whenever we ate at other local restaurants, tasting the delicacies of the country, we were always treated to a steady stream of complimentary bread. I know this might seem overblown, that getting free bread is somehow an indication of hospitality, but it’s not something that exists in the UK anymore because of economic realities.

My match day experience was also fantastic. The free Metro and bus travel was a welcome addition. The well lit, spacious, clean, and air conditioned stations and trains provided solace from the baking sun.

While on the Metro, there were staff members providing assistance to travellers. I remember one instance in which a lady with a buggy was assisted by one of the rail attendees. She was taken to one of the designated areas for mothers travelling with children.

As the World Cup was essentially taking place in one city, it was easy to take on multiple matches in a day and several in a week. What some saw as a vice, the size of Doha, was actually a virtue. Some people have gone to 16 matches during the group stage because the minimal distances allow it. After every match I went to that had a match following it, there were always buses ready to take you to the next group game, should you so wish.

Contrast this to the two previous World Cups in Russia and Brazil. Due to the sheer sizes of the countries, there were huge distances between stadiums, so taking in multiple games in a day was impossible.

The same will happen at the next World Cup in North America, held jointly between Mexico, Canada, and the USA. As it is taking place in three countries, fans will essentially have to pick which area of the continent they wish to be in to see games. You may think that because it’s being held in three countries, these logistical issues would be a given. However, even if the USA held the tournament themselves, there would have been a 7-hour plane ride between the venues in the northeast of the country and the west.

A hallmark of this World Cup – something I’ve referenced previously – is the environment for families. I saw children with parents going to late night kick-offs at 10 PM local time. This could be for a number of reasons. It could be due to the lack of alcohol being sold around stadiums. In fact, it was reported that some women have never felt as safe at games than at Qatar. This was put down to the lack of alcohol. [1]

It could also be due to the way security at stadiums has been administered. There are family and women-only lines, meaning that when women go through security, if their belongings need to be searched, it is done by someone of the same gender.

“…while there was a high level of security, I never felt securitised.”

As with any major sporting event, there was a high level of security. We had to navigate the metal detectors, bag searches, and scan our ticket at various points of entry. This is par for the course. However, while there was a high level of security, I never felt securitised. You might be reading this and thinking, “What do you mean?”, and whether this is mere semantics. It’s not.

When I’m using British railways, there is a constant reminder to “See it, say it, sort it” – the network-wide message referring to suspicious activity.

This is a reminder that I’m living in a country that has a ubiquitous counterterrorism framework, whether that’s Prevent, Schedule 7 stops, or the other myriad counterterror powers.

Wherever I fly, – and I touched on this in my initial article – the spectre of a Schedule 7 stop is always looming and this can scupper any plans I’ve made. When I walk through hub stations such as St. Pancras, I see armed police officers with their semiautomatic weapons.

While in Qatar, I didn’t have that concern. I didn’t feel like I needed my guard up and to be constantly aware of my surroundings, that something I say or do could be misconstrued and somebody could “See it, say it, sort it”.

The waving of Palestinian flags was not just limited to matches from Muslim countries such as when I went to watch Senegal and Tunisia, but it was also visible at the Argentina vs. Mexico clash. Despite both countries being from Catholic backgrounds, it was clear that the support for the Palestinian cause crossed religions. I couldn’t go a few moments in public without seeing the prominence of the flag.

This support for the Palestinians was visible on the pitch, too. When Morocco beat Belgium in a shock victory, Moroccan fans celebrated by chanting about the Palestinians.

"To our beloved Palestine, the most beautiful of all countries"

Morocco World Cup fans sing in solidarity with Palestine in Qatar. The North African country went on to beat Belgium today in a historic 2-0 win, their first World Cup victory in 24 years pic.twitter.com/Ir2iEtZsp3

After Morocco defeated Spain in the second round, the Palestinian flag was prominent in their celebrations. Fans shouted “Free Palestine!” during interviews with multiple outlets, again irrespective of background. It was heart-warming to see.

Regardless of how I felt during my time in Qatar, how well things go on the pitch matters just as much as what happens off it. A successful tournament requires both.

This isn’t hyperbole. This is my seventh World Cup and I haven’t seen anything like the shocks, the tension, and the twists. We had the biggest shock in World Cup history when one of the pre-tournament favourites, Argentina, were beaten by minnows, Saudi Arabia.

Japan humiliated the Germans in a 2-1 comeback defeat and then beat Spain, despite being dominated for the majority of the game. There was a small period of time when both Germany and Spain were both about to be knocked out of the World Cup at the first hurdle during the last round of fixtures. Spain just about made it through.

“Morocco conquered Spain”… in the second round

Morocco humbled world number two Belgium on their way to topping their group. They then conquered Spain in the second round on penalties – Achraf Hakimi sealing their penalty win with an audacious Panenka.

Cameroon and Serbia shared the points in a thrilling 3-3 draw, where Cameroon led, then fell two goals behind, before making a comeback to draw. While Cameroon did not make it past the group stage, they did gain an historic 1-0 win over the Selecao.

There were last-minute heroics in Group H. Going into the last set of games, Portugal had already secured their place in the knockout phase, but Uruguay, Ghana, and South Korea all had a chance. It appeared Uruguay were through when they were winning 2-0 against Ghana. However, South Korea scored a 91st minute last gasp winner against Portugal and put themselves in second place.

The next ten minutes were full of tension for the three teams. The contest between Ghana and Uruguay still had ten minutes left to play while South Korea’s match had ended. The Korean team in bated breath waited for the result in the Uruguay vs. Ghana match.

Uruguay, knowing that Korea had won, knew they needed another goal or they would be out. Despite having the same number of points as Korea, that would be ‘out’ on goals scored. Ghana were given a sliver of hope, as a draw would put them through.

What followed was ten minutes of hectic, frenetic football. Unfortunately, it was all for nought as both teams went out and South Korea went through, tears flowed from the faces of the Korean players, as they knew they were going into the next phase.

Much is always made about the legacy of international tournaments; the World Cup is no different. Discussions about legacy tend to be aimed at nations outside of Europe, if we are honest. We’ve seen the white elephant stadiums in Brazil, where some venues are used as parking for buses. [2]

Qatar isn’t a big country with a lot of people, nor does it have a huge footballing infrastructure. Nevertheless, steps have been put in place as part of the process of having a lasting legacy from the World Cup. They will reduce the size of some of the stadiums and offer seats to developing countries that need it as part of their footballing infrastructure, a total of 170,000 seats have been pledged.

But I don’t really want to look at the dunya aspect of the legacy of a Qatari World Cup, but rather an ākhirah perspective. While I was still in Qatar, it was reported that 558 people had taken shahādah, alḥamdulillāh.

558 people have reportedly embraced Islam over the past week in Qatar https://t.co/tMg6HUS4WH

And this was all even before a ball had been kicked. Videos have circulated on social media of non-Muslims going to the masājid and listening to Islamic reminders. This might have been their first time hearing about the real Islam, not the media perception that is widely circulated.

“The hospitality, the interaction with Muslims, the potential embracing of Islam, maybe that’s the real legacy of this World Cup. To use a phrase, this has been the best World Cup ever!”