Ever thought of wearing a bright orange thobe? 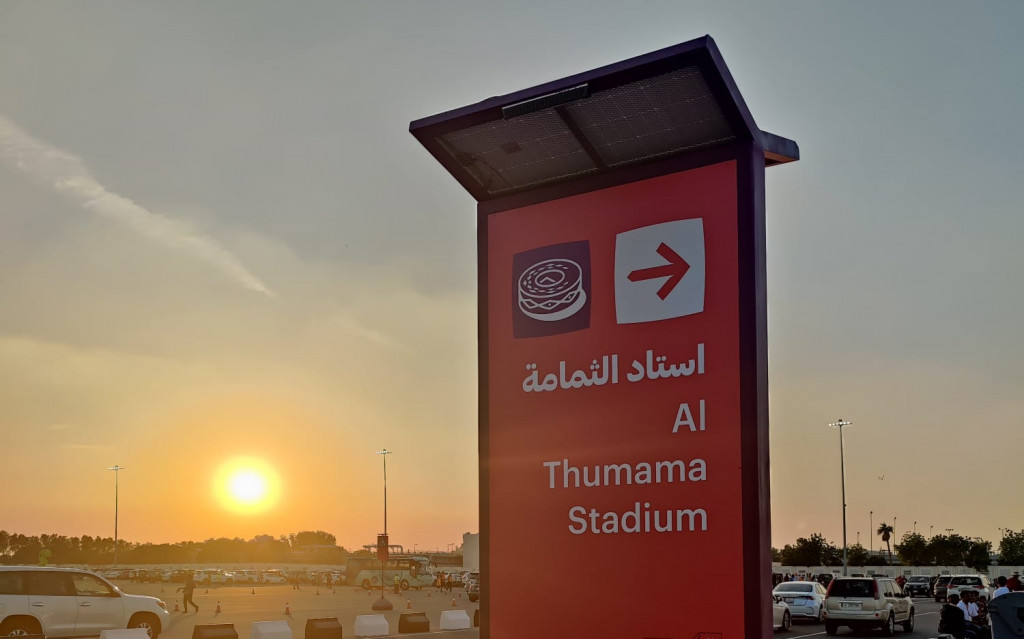 A beautiful sunset captured prior to the Netherlands vs. Senegal game at al-Thumama Stadium

Tonight was the big night. I had waited 8 months in anticipation for this evening to come. It was finally here, my first time watching a match live in a stadium at the World Cup. The match that I was attending was Senegal vs. the Netherlands, due to start at 7 PM local time/ 4 PM GMT. We left our accommodation three hours before the kick-off, a little before Maghrib.

The sun was progressively getting lower, the sky changing from light blue to shades of orange to pink. I walked to the stadium from where we were dropped off. Scores of people were ambling across the bridge. As I meandered up the ramp, I saw the stadium in all its glory. The greyish white stadium reminded me of Bayern Munich’s Alliance Arena, although this stadium was more circular, to reflect the gahfiya, the traditional hat worn by males in the Arabian Peninsula. It is said that this cap is a symbol of coming of age, from youth to manhood. This reflects Qatar’s coming of age on the world stage, using football as a vehicle.

Would you ever wear an orange thobe?

The process of getting into the stadium was fairly simple. My ticket was activated via Bluetooth, once I got close enough to the site. A quick pass through security and I was then within the stadium grounds.

At this point, to the right of me was the merchandise tent. The tent was overlooked by a jumbo screen showing the England game. There was another checkpoint to navigate and into the stadium, I was.

My first thought was to look for a prayer room since Maghrib had entered. I’ve prayed at stadiums before, but never in a prayer room. I know they exist in English stadiums but they tend to be located in one part of the venue. It can be very difficult to find them, especially when you are in another part of the building. When I find myself at an English stadium, I usually just pray in the concourse.

Nevertheless, I found the prayer room and joined the jama’ah that was in progress, being led by a police officer, while I prayed next to other officers. Surat Quraysh was recited in the second rak’ah. The prayer room was a well-lit area, with light cream and burgundy carpets, reminiscent of the Qatari flag.

There was still ample time before kick-off. I was walking around the stadium and saw former Dutch international World Cup finalist, Rafael Van Der Vaart, who was on the broadcast. The area he was standing in was cordoned off, guarded by security. I tried to take a cheeky pic but was gestured away by security. I thought I was in trouble but that moment of anxiety soon turned to calm when I realised that the officer was actually telling me to come closer and get a better angle for my picture.

I then made my way to my seat in the third tier. On the way there, I saw another prayer room.

Regrouping with my brothers & taking my seat before the Netherlands vs. Senegal game

I walked up the stairs to my seat and saw the pitch for the first time. I took my seat, next to my brothers. The seats were wider and more comfortable than I’ve sat on in England, the seats at Anfield being particularly narrow.

The stadium was also a well-ventilated place, with air conditioning providing crisp, cool air. To quote John Hammond from Jurassic Park, the Qataris “spared no expense”. From my vantage point, I could see everything; there were no blind spots. On two corners of the stadium were big screens. Below me and to the left was a sea of orange.

The anticipation built for the game, with the MC coming on the screen every so often to hype the crowd. However, just before kick-off, all in attendance were given an unexpected surprise. A huge statue of the World Cup was placed in the centre circle. The lights dimmed, followed by an audible gasp around the stadium.

Around the trophy were about ten boxes. Then the pyrotechnics went off, fire filled the sky, surrounding the World Cup; purple and white strobe lights moved in a circular motion around the trophy. Oohs and aahs filled the stadium. It was pretty special.

Once the light show had ended, the game kicked off. One of my brothers bought me a shawarma wrap. Shawarma wrap at a football match, what a novel idea! At this point, the stadium was just over three quarters full. Seas of orange were interspersed with neutrals and Senegalese fans.

While the Dutch side won 2-0, it was the Senegalese fans on the opposite side from where we were sitting who captured hearts. They were in full song throughout the 90 minutes, painted in their flag colours of green, yellow, and red.

On to the next one, Denmark vs. Tunisia…