CAGE and the Jihad for Truth 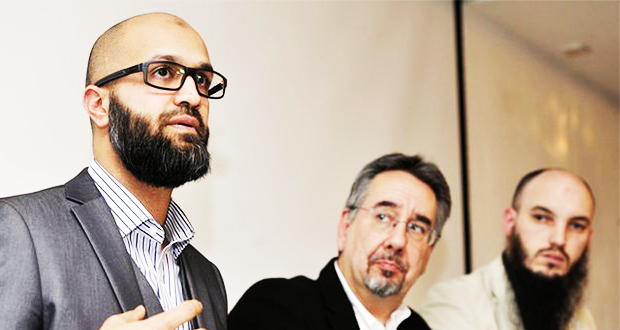 CAGE and the Jihad for Truth

A man asked the Messenger of Allah (sall Allāhu ʿalayhi wa sallam) “What is the most virtuous struggle (Jjihād)?” The Prophet said, “A word of truth in front of a tyrannical ruler.” [1]

When people think of jihād today, they often think of it in the military sense only because of rogue groups purporting to carry out this noble act and those who have twisted and misconstrued the concept, making it synonymous with terrorism and co-called “extremism”. In both cases thus the true essence of jihad—such as standing up against injustice and oppression—is forgotten.

In Islām, truthfulness is the very cornerstone of the upright Muslim’s character and the springboard for his/her virtuousness deeds. Allāh says:

‘Abd-Allāh ibn Mas’ūd (raḍiy Allāhu ʿanhu) said: “The Messenger of Allāh (sall Allāhu ʿalayhi wa sallam) said: ‘You must be truthful, for truthfulness leads to righteousness and righteousness leads to Paradise. A man will keep speaking the truth and striving to speak the truth until he will be recorded with Allāh as a siddeeq (speaker of the truth). Beware of telling lies, for lying leads to immorality and immorality leads to Hellfire. A man will keep telling lies and striving to tell lies until he is recorded with Allāh as a liar.” [3]. This hadīth indicates that truthfulness leads to righteousness (al-birr), an all-embracing concept that includes all kinds of goodness and different kinds of righteous deeds.

It is narrated in the hadīth in al-Bukhāri and Muslim that no baby spoke in the cradle except three (and some say four), those being ‘Īsā (ʿalayhi al-Salām), Juraij, and another baby from the Banī Isrā’īl, and others mention the story of the Companions of the Trench, where a baby spoke to its mother to become a martyr. What you will notice is that Allāh made all the babies speak out of some impetus for justice. He made ‘Īsā (ʿalayhi al-Salām) speak to absolve his mother of charges of indecency; the baby in the story of Juraij spoke for a similar reason, the child of the Banī Isrā’īl spoke to differentiate a man that was a tyrant from a girl that was falsely accused. Allāh made miracles speaking for justice. And if Allāh made babies speak up for what is right, do you not think this is expected of you and me? [4]

The reason why the advocacy group, CAGE are being attacked by all and sundry is for no other reason other than the fact that they dared to tell the truth, a truth which was so bitter that many simply could not stand to hear it. Many will say that the situation of the Muslims here in the UK is such that making the claims that they did, will only bring further spotlight on the community for stirring the hornet’s nest. But as we can see from the above, it is from the fundamental teachings of Islām that truth cannot make concessions with falsehood. We are taught that wherever we see falsehood, we should run towards it to confront it with the truth, however bitter it may sound. Indeed this was from the way of the Messenger of Allāh (sall Allāhu ʿalayhi wa sallam), the following is a very good example of this.

When the Prophet’s (sall Allāhu ʿalayhi wa sallam) uncle, Abū Tālib died, you can imagine the anxieties he was facing now that he lost his main protection from among the people. During this period, one of the biggest enemies of Islām and of those who caused most suffering to the Prophet (sall Allāhu ʿalayhi wa sallam), Abū Lahab said: “O Muhammad, pass on freely as you want. Do whatever you did when Abū Tālib was alive. No, by al-Lāt (an idol), I swear no harm will befall you before I die.”

He could have easily given him a vague response to please him, to have dressed his response up in order to ensure that Abū Lahab remained on good terms with him. But such was the firmness of the Messenger of Allāh (sall Allāhu ʿalayhi wa sallam) and his certainty in his greatest ally and protector, Allāh jalla wa’alā and his principle in standing with the truth that he responded as follows, and in doing so, invited on himself once again the wrath of Abū Lahab:

“Na’m (yes), whoever dies in the state of ‘Abd al-Muttalib was in, goes into hell-fire.”

On hearing this, Abu Lahab announced, “By God, I shall always be your enemy for your claiming that he is in the fire!”.[5]

What should be the response of the Muslim community? The response should be, as it has been so far, which is one of overwhelming support and unity. If you think about it, for the first time ever, we are not seeing Muslim organisations falling over themselves to condemn on this issue and neither are they being asked to do so as is usually the case and that is primarily down to Allāh but also to the sacrifice of brothers such as those in CAGE in shouldering this burden by flipping the script.

We should either be a mountain, or lean on one. If anyone can be a mountain like CAGE then let him/her do so but if not, know that CAGE is indeed a mountain in the defence of the Muslims and let us lean on them and support them. Fulfilling the needs of people is one of the greatest acts of worship, and proof enough for this are the Prophet’s words, (sall Allāhu ʿalayhi wa sallam):

“For me to walk along with my brother to fulfil his need is more beloved to me than to make I’tikaf in this mosque of mine for a month.” [6]

To our brothers who are being maligned in this difficult time, we pray that Allāh keeps you firm, protects you and makes these deeds of yours weigh heavily on the scale of deeds. And know that you have done what many great men have done before you such as Ibrahīm (ʿalayhi al-Salām) against Nimrūd, Mūsā (ʿalayhi al-Salām) against Fir’awn, and Malcolm X against the oppressive racist powers of his time; in each case, accounting the powers that be and inviting scorn on themselves in the process. Dear brothers, I leave you with the statement of the great sage and scholar of Islam, Ibn al-Qayyim which I hope you will take heart from in this testing time you are facing:

“Truthfulness is the greatest of stations, from it sprout all the various stations of those traversing the path to God; and from it sprouts the upright path which if not trodden, perdition is that person’s fate. Through it is the hypocrite distinguished from the believer and the inhabitant of Paradise from the denizen of Hell. It is the sword of God in His earth: it is not placed on anything except that it cuts it; it does not face falsehood except that it hunts it and vanquishes it; whoever fights with it will not be defeated; and whoever speaks it, his word will be made supreme over his opponent. It is the very essence of deeds and the well spring of spiritual states, it allows the person to embark boldly into dangerous situations, and it is the door through which one enters the presence of the One possessing Majesty. It is the foundation of the building of Islām, the central pillar of the edifice of certainty and the next level in ranking after the level of prophethood.” [7]