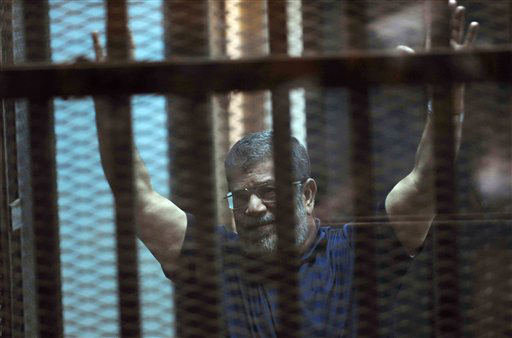 Note; this article has been updated following today’s breaking news

President Morsi, we salute you, because prison in Egypt without justice was for Yūsuf (ʿalayhi al-Salām) when:

Prison in Egypt without justice was for Sayyid Qutb (rahimahullāh) when he said:

“It is not befitting for a leader to follow concessions… all praise is due to Allāh, I strived 15 years for martyrdom… (moments before his execution he said) this finger that declares the oneness of Allāh in Salah refuses to write a letter in recognition of this tyrant’s authority.”[2]

Prison in Egypt without justice was for Zaynab al Ghazāli (rahimahallāh) when she said:

“Killing Abdel Nasser is not from the Muslim Brotherhood’s aims… rather we aim to establish Tawḥīd, the worship of Allāh, the Qur’ān and the Sunnah.“2

These foolish despots leant no worth to you and that is to their own demise and humiliation. They leant no value to the Qur’ān you held in your heart, a Hāfidth of the Qur’ān you were as was your patient wife and your five children.[3] [4] They leant no value to your history of struggle and Da’wah in the United States, alongside your distinguished successes as a Rocket Scientist with intents to revolutionise Egypt’s industry.[5] They leant no value to you when you accepted to rule Egypt on the lowest salary for a President in the world,3 the salary of a cleaner, as indeed it was a cleaning job, cleaning corruption, removing irresponsible governors, useless army chiefs and bringing true justice for the hundreds killed in the 2011 protests against Mubarak.

You should also read:

Nine Steps to Jackassing a Nation
Israel 2.0: The country formerly known as Egypt
10 Things You Didn’t Know About President Morsi
The Egyptian Media’s Dirty Game
The Waged War on Islam in Egypt
Other Egypt related articles

Instead they overthrew you, sentenced you to 20 years in jail and then today gave you a death sentence, massacred more than 3000 of those who paraded in your support, a fraction of the 13.2 million who waited under the blazing sun to cast their vote for you. For indeed you stemmed from a group who ran 1000 Non-Governmental Organisations, developed impartial intuitions for the poor and destitute,[6] raised leaders and rocked the feet of oppressors. We will not forget the year of hope that you ruled. Amidst perpetual protests and media drivel, your administration transformed Egypt into a civil state, after decades of military rule. Agricultural exports increased by 20%, the Central Bank’s deficit reduced by 45% and economic growth rose to 2.4%.[7]

Scholars, teachers and politicians engaged with the world with unmatched impartiality and the eyes of each Muslim were set on Egypt with ambitious hope. We will not forget your answering the cries of the Syrians, severing Egypt’s ties with the bloody regime and exclaiming to all hearers: “We hear your call, Syria”,[8] and your support of its formidable revolution. We still feel the dignity that filled our hearts when you played the pivotal role of stifling Israel’s war machine that was charging for Gaza on-par another massacre.[9] We recall how you withdrew your ambassador from the Zionist entity, whilst dispatching your Prime Minister to Gaza in solidarity with its populace and resistance.[10] Could this have been the last massacre against Gaza they asked when they witnessed your enthusiasm, not knowing how the tides of evil would cast you in jail and pave the way for another Gazan massacre in 2014, amidst the apathetic, dire regime that followed. We will never forget how you represented the face of Islām, and how you echoed the names of the companions ʿUmar, Abū Bakr, ʿUthmān and ʿAlī (raḍiy Allāhu ʿanhu,) in the heart of Tehran.[11]

Today we will not analyse the claimed reason for President Morsi’s 20-year sentencing along with 14 other senior Muslim Brotherhood members a few weeks ago followed by today’s death sentence, or echo the events that occurred outside Ittihadiya presidential palace, following Morsi’s constitutional declaration. We will not echo how senseless mobs burnt the Muslim Brotherhood’s headquarters unimpeded,[12] and approached the president’s palace amidst combined failing, collusion and treachery on half the interior ministry,[13] forcing sincere advocates and electors to defend their president themselves. We will mention the western media’s best endeavours to uphold the legitimacy of these politicised kangaroo courts, by lending them a degree of legal authority and spurting and reciprocating the Ittihadiya events while overlooking what was otherwise brighter than the sun.[14] We will mention the BBC’s admission that the majority of those whom were killed in Ittihadiya were supporters of President Morsi[15] alongside the abortion of democracy demonstrated by the governments they speak on behalf of.

“What does Mr Morsi say?” the BBC asks – “Mr Morsi has rejected the authority of the courts” (emphasis added in case missed). Do not question anything dear reader, we shall dictate reality for you. Mr Morsi alone has questioned the authority of the courts and we are between a tit-for-tat, balanced ‘legal battle’, we the BBC imply. Do not question dear reader the coup of Egypt’s first instance of electoral democracy in 7000 years. Do not question dear reader the authority of a court that has mass sentenced hundreds to death including children and non-existent individuals. Do not question the veracity of ‘judge’ Nagy Shehata, more similar in behaviour to a rogue drug-lord, but assigned to head six judiciary circuits dedicated to ‘terrorism’ and in 2005 responsible for forging elections, cursing and mocking members of the brotherhood on his Facebook account and sentencing the three Aljazeera journalists without due process.[16]

Only Morsi rejects the authority of the courts, apparently not the BBC. Do not question dear reader a court that has acquitted Husni Mubarak and his aides of all charges, 23-years of corruption, nothing. Do not question why not a single individual has been charged with the murder of at least 770 protestors in 2011, or the holocaust in the right of the peaceful Rabaa al Adawiya sit-in in 2013,[17] or the almost 5000 killed ‘since the last days of Mubarak and the ascension of Sisi’[18]. Do not questions the West’s restored diplomatic representation in Egypt, and its restoring of military aid (second in magnitude to Israel)[19] to help Sisi carry on sniping women, burning and shovelling corpses, razing 5km of civilian infrastructure in Sinai to ‘secure’ borders with Gaza.

What we learn from the US and its phonies is that President Morsi could have indeed done things better if he was given the chance. We learn from Morsi’s victory in five successive elections (2011 constitutional referendum, 2011-12 People’s Assembly vote, 2012 Upper House of Parliament, 2012 Presidential Election and the referendum on the new constitution) and the down-trodden judiciary that he was right in broadening his powers above any court.[20] President Morsi should have formed a cabinet purely from elected members i.e. the MB’s Freedom and Justice Party, as despite his outstanding tolerance and attempts to appease the never appeased, assigning only four from 35 cabinet seats to his party, and others to women and Christians,[21] he apparently still ‘hoarded power’, and ‘Islamicised’ ministerial and governmental posts.[22] All other governments of the democratic world usurp their full right over cabinet, but acceptance of democracy stops at the doors of Islamist presidents, and for them the western world lays out a new set of double-standards.

If Sisi’s ‘reformed’ Egypt of repression, corruption and legal politicisation is what delights the UN at its General Assembly that it puts him at centre stage,[23] draws love letters from the UK Prime Minister,[24] encourages billions of dollars in gulf-state aid,[25] and facilitates colossal military contracts with Russia,[26] then we salute President Morsi for teaching the western world the true meaning of dignity, political excellent and democracy. Whether President Morsi sees the light today, tomorrow or never, Sisi will never be recognised as Egypt’s president, so let him enjoy whatever synthetic authority he has made for himself, and between us and him is a Just Lord, a Hereafter and a slippery slope to Hell.

“And do not think Allāh to be heedless of what the unjust do; He only respites them to a day on which the eyes shall be fixedly open.“[27]