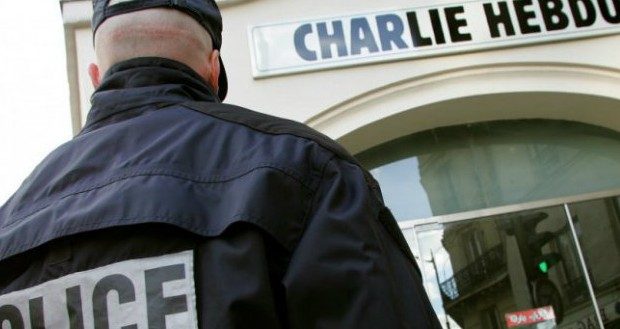 What to Say When You Have Nothing to Say

What do you say when you have nothing to say?

That is the dilemma suddenly thrust on political leaders and editorialists in France since three masked gunmen entered the offices of the satirical weekly Charlie Hebdo and massacred a dozen people.

The assassins got away.  But not for long. The men were well-armed killers.  Charlie Hebdo regularly received death threats since publishing derisive cartoons of the Prophet Mohammed several years ago.  But the controversy seemed to be largely forgotten, the weekly’s circulation had declined (like the press in general) and police protection had been relaxed. The two policemen still on guard were easily shot by the gunmen before they entered the offices in the midst of an editorial meeting.  Rarely were so many cartoonists and writers present at once.  Twelve people were slaughtered with automatic weapons, and eleven others wounded, some critically.

In addition to the cartoonist known as Charb (Stéphane Charbonnier, age 47) who was current editor in chief of the magazine, the victims included the two best-known cartoonists in France: Cabu (Jean Cabut, age 76), Georges Wolinski (80 years old).  A couple of generations have grown up with Cabu and Wolinski, gentle mirrors of the sentiments of the French left.

2015-01-09
Counter Punch
Previous: Charlie Hebdo: This Attack Was Nothing To Do With Free Speech — It Was About War
Next: Charlie Hebdo: Norway didn’t give in to Islamophobia, nor should France