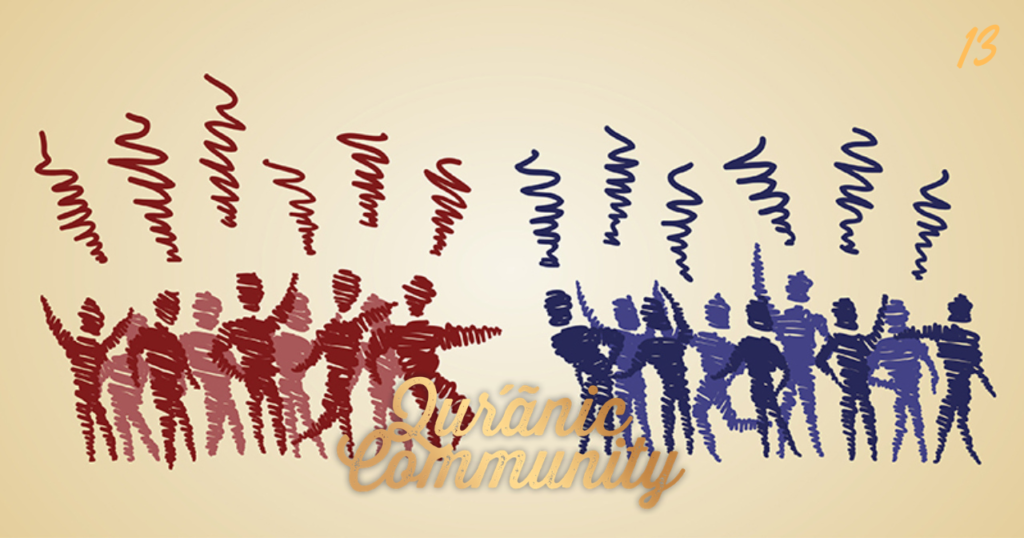 Allāh has now warned us about the news conveyed by the Fāsiq (the ‘deviator’), either the conditioned and habitual liar, or the one who is indifferent about major or lesser sins. Here, Allāh teaches us the particular and natural repercussions of ignoring such advice; strife, conflict, and fights. Had the Prophet (sall Allāhu ʿalayhi wa sallam) taken action upon hearing the news about Bani al-Mustaliq, he would have fought them. Unverified news and miscommunication are of the greatest causes of conflict. Consequentially, if fake news is nonetheless spread, Allāh the All-Merciful guides us to the resolution of the ensuing conflict:

As such, the worst forms of unverified reports are those spread by collectives of people about other collectives. This is because scrutinising such reports is more difficult than scrutinising that of an individual. Sometimes fights break out before one even has a chance to reconcile. As far as undoing damage, regret in such circumstances becomes futile.[2] Allāh has thus commanded that believers try their best at pre-empting conflict through initiatives towards reconciliation by providing advice, reminders, guidance, and fair judgement until one of the two parties crosses red lines and insists on its offence. In all cases, this ‘intervention’ is to be overshadowed by Allāh’s Taqwa and His preferences, not our personal biases, prejudices, or irritations.

If two parties from the people of Iman fight, then make peace between them by inviting them to judge by the Book of Allāh and to be contented with what it contains, both for them and against them. This is how to reconcile justly.[4] This invitation can assume the form of offering advice (Nusḥ), or by invitation to return to Allāh’s command either directly or to the terms of a previously signed agreement between them such as a contract or a truce. Obeying such agreements is also part of Allāh’s command.[5] Allāh says:

“You who have Iman! Fulfil your contracts.”[6]

But if one of the two parties refuses to comply when invited to judge by the Book of Allāh containing what is due to them of rights and what is due on them of duties, and transgresses the justice that Allāh has afforded His creatures whilst other party responds, “fight the attackers.” Fight whoever transgresses and refuses to respond to the judgement of Allāh “until they revert to Allāh’s command”; the command that Allāh has provided in the Qur’ān to provide judgement between His creatures.[7]

Some have suggested that ‘adl and qist are synonyms. In this case, the repetition of qist is included for emphasis. This would mean that the one restoring justice by addressing what the two parties did to one another (i.e. restoring usurped rights and carrying out retribution for any wrongdoing), should do so justly.[9] Others have differentiated between the meanings of ‘adl and qist. The muqsit (from qist) is the one who gives every single person their due, in a way that is clearly apparent and visible. Qist is, therefore, more specific than ‘adl. It is a type of justice that makes rights and dues clear and evident to those seeing it. From it comes the word ‘qistās’, which is the iron rod that holds up scales. Scales are a physical manifestation of justice. It is evident that when the two plates are finely balanced, there is ‘justice’, and when one hangs below the other, there is injustice.

This would mean that the second process is about making justice clear, whereby the offender becomes known and those that are wronged also become known. When hostilities have ended and emotions are no longer raw, it becomes time to settle the matter once and for all, establish justice, restore rights, and move forward so that the original dispute is not repeated.

Despite the start of the verse occurring in the past tense (“if two parties have fought”), it should be understood as “if two parties of believers desire to fight”. This is akin to Allāh saying: “You who have Iman! When you get up to do Salah (read literally “when you have gotten up to do Salah [in the past tense]”), wash your faces and your hands…”[10] Although it is well known that wudu takes place before Salah, the linguistic dictates are of a future tense nature, i.e., when you intend on performing Salah. The verse of al-Ḥujurāt is therefore telling us that a fight should be prevented when it is sensed and brewing, before it even has a chance to take place.[11]

The word ‘Tā’ifah’ is in the linguistically singular form and refers to a group of people. When Allāh refers to the involved groups, He uses the dual form ‘Tā’ifatān’, meaning two groups. Yet when He refers to the fighting, He says, ‘Iqatatalū’ in the plural form, not ‘Iqtatalatā’ (in the dual form). This may be because when war is declared by the heads of the two parties (the dual form), it affects and involves the collective. But when Allāh refers to making peace, He goes back to using the dual form ‘fa asliḥū baynahumā’. War is usually declared by the two heads of the fighting factions. For reconciliation, the peace maker should target those very two heads for the collective to stop fighting, not necessarily reconciling between everyone involved and the other.[12]

‘Fighting’ the aggressing party, according to some, means to coerce them (al-daf’) to fair judgement. Qatādah said: “It is not as those with erroneous beliefs, innovations, and lies against Allāh and His Book said: ‘that it is a dispensation to kill a Muslim’, for Allāh made the Muslim extremely sanctified and protected, to the extent that you cannot but think good about your brother (let alone fight them). Allāh says in the verse immediately following this one: ‘The believers are brothers.’”[13]

Although the concept of making peace is general, the action of ‘fighting’ the aggressing party is primarily directed at the leader of the Muslims after every effort has been made to restore the right of the oppressed. Meting out physical force to maintain law and order is always exclusively a political state’s dispensation. The fact that Allāh is addressing the leader of the Muslim community reinforces the idea that Surah al-Ḥujurāt came down at a time when Muslims were dominant and in charge. This legislation is primarily intended to govern states and armies with what they should do to maintain harmonious societies.

This drastic measure of fighting the aggressing party is further to emphasise the importance of maintaining such societal harmony and the bonds of brotherhood when in every other situation it is entirely prohibited. The only reason they are fought is because they are a group who have gone out of control, not an individual who can easily be restrained or controlled.

Notice that Allāh referred to the two fighting parties as ‘mu’minīn’ in spite of their fighting. Many scholars used this verse to prove that a major sin does not invalidate a person’s Iman. This is unlike the attitude held by many heretic groups who excommunicate people from Islam for the most trivial of matters, let alone a major sin such as fighting a believer. The Prophet (sall Allāhu ʿalayhi wa sallam) once delivered a sermon with his grandson al-Hasan sitting on his lap. The Prophet would look at him once and at the congregation again saying:

“This son of mine is a Sayyid (i.e. a noble) and Allāh may make peace through him between two huge groups of Muslims.”[14]

It was through al-Hasan b. Ali (rady Allāhu ‘anhu) that Allāh reconciled between the people of Greater Syria and those of Iraq after the colossal events that took place between the “two huge groups of Muslims”.[15] Our love of one companion or another, or indeed the family of the Messenger of Allāh (sall Allāhu ʿalayhi wa sallam), should never lead us to excommunicate those who may have differed with them on the back of their Islamic judgement and understanding. By the Prophet’s testimony, they were both Muslims despite there being blood between them. And it is well known that in this very incident, they did exactly what Allāh ordered in the verse of al-Ḥujurāt: striving towards reconciliation using the Book of Allāh. It was in fact the Khawārij, after claiming they would be satisfied with the judgement of the Book of Allāh, who were the first to protest against that judgement, because they were instead vying for power.

“Fight the attackers” or the transgressors means fighting them to the extent needed for them to return to Allāh and His Messenger’s commands. It is a limited means to an objective, and that objective is to bring about their own ultimate benefit and protection, even if it involves fighting them. This is much like forcefully stopping a person from destroying his or herself, particularly on occasions when their anger causes them to lose their own sanity or sound judgement. Such are the hallmarks of an interdependent and altruistic community. The repercussions of being forced out of evil are much better than being given the ‘freedom’ to engage in it as one pleases (as a side note, unrestricted freedom can never thus be an objective). The Messenger of Allāh (sall Allāhu ʿalayhi wa sallam) said: