Quranic Community #20 | Your Inner Reality will inevitably be Exposed 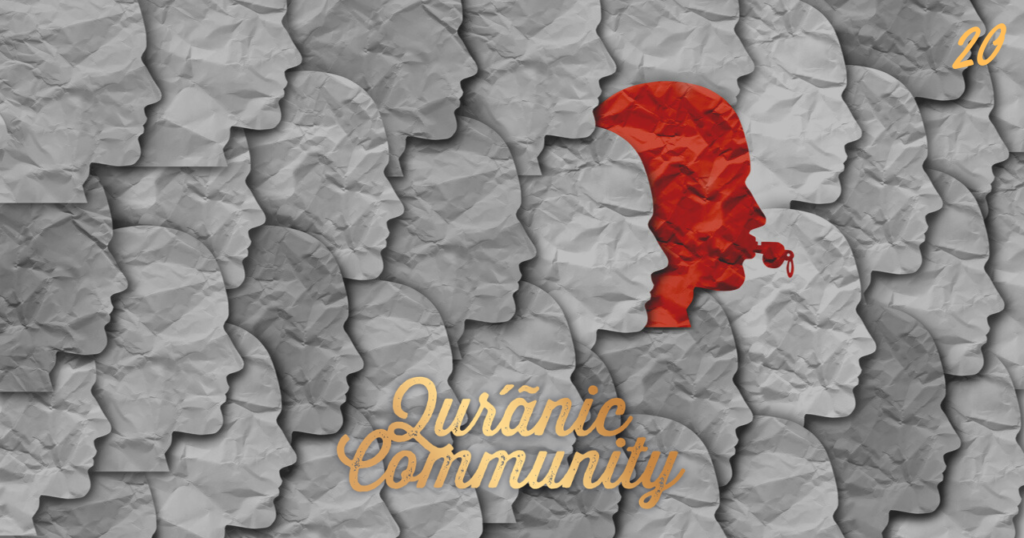 In the previous section, Allāh outlined the ethics that are due to believers both in their presence and in their absence, as well as those we should hold internally and those we should display externally. We concluded that the noblest among mankind are those with the most Taqwa, and that only Allāh knows the extent of this hidden trait can make that determination. He is fully acquainted with what occurs in the hearts. None of these ethics can truly be realised or accepted by Allāh except with true Iman and sincerity of intention. All of al-Ḥujurāt’s ethics and realisations stem from one’s internal sense of Iman. Allāh’s appeal to your Iman is repeated several times as it is the requisite for every objective mannerism. It goes without mention that this Iman is far beyond being a claim occurring on the tongue. It has fundamentals and stipulations and is validated by hard work and sacrifice.

Al-Hasan al-Basrī is reported to have said:

“Iman does not come through hopeful wishes nor is it an (external) decoration. Iman is what establishes itself in the heart and is validated by action.”

“The desert Arabs say, ‘We have Iman.’ Say: ‘You do not have Iman. Rather, say, “We have become Muslim,” for Iman has not yet entered into your hearts. If you obey Allāh and His Messenger, He will not undervalue your actions in any way. Allāh is Ever-Forgiving, Most Merciful.’”[1]

Among the many delegations that came to Madinah in the ninth year of Hijrah was a tribe by the name Bani Asad b. Khuzaimah, who arrived shortly after Banu Tamīm (discussed earlier). Their arrival coincided with a drought that had taken grip of their town. Naturally, some wanted to escape and therefore relocated to Madinah to harness the Messenger’s support, while others may have been more sincere.

Addressing the noble Messenger (sall Allāhu ʿalayhi wa sallam), they would say: “The Arabs came as individuals on their rides but we came to you with all of our belongings and children and we did not fight you as so and so did…”

Notice how al-Ḥujurāt coherently begins by addressing the behaviour of Banu Tamīm and now concludes by addressing the behaviour of Banu Asad. One association is that both arrived to Madinah at a similar time, but more tellingly, the nature of their misbehaviour is very much the same.[2] Banu Tamīm raised their voices above the noble Messenger of Allāh (sall Allāhu ʿalayhi wa sallam), expressively putting themselves ahead. They assumed themselves to be the worthy centre of priority and importance. Similarly, Banu Asad deemed their arrival a favour to the Messenger of Allāh (sall Allāhu ʿalayhi wa sallam), thus deeming that the Messenger and his message had exclusively anticipated their arrival and was strengthened by it! It was almost as if were it not for their ‘important’ arrival, the Ummah would have suffered, and as such should be indebted to them.

The above verse is understood as follows: the Bedouins said we have believed in Allāh and His Messenger, therefore we are ‘Mu’minūn’. Say, to them, Muhammad (sall Allāhu ʿalayhi wa sallam), you did not really believe, nor are you ‘Mu’minūn’, but instead say ‘aslamnā’ (we have become Muslim). Islam is confined to speech, whereas Iman is both speech and action. These Bedouins had not supported their claim to Islam with the necessary actions.

Another understanding is by the literal and linguistic meaning of ‘Islam’ – submission (istislām). Specifically, ‘do not say ‘āmannā’, but say ‘we have submitted (istaslamnā)’, having submitted to the Messenger’s strength and authority and having feared fighting him, being taken as captives, or being killed. Imam al-Tabari prioritises the first meaning; that Allāh wished for their claim to be more precise. Instead of ‘āmannā’, specify it by either ‘we have believed in Allāh and His Messenger’ or say ‘aslamnā’. In other words, you have uttered the Shahādah without yet carrying out its many stipulations. The knowledge of Iman and the reality of its meanings are both yet to enter your hearts.[3]

Note that ‘Lama’ (has not yet) is different to ‘lam’ (has not). ‘Lam’ implies a present and continuous negation, meaning that ‘Iman has still not entered your hearts’. ‘Lama’, however, implies negation that is likely to change in the future. Though it is true that ‘Iman has not yet entered your hearts, this is likely to change in the future if the necessary effort is put in place’.[4] It could also be that the Bedouins had not believed when they claimed they had, only to become Mu’minūn afterwards. The statement “you have not believed” is an exposition of the secret condition of their hearts. Therefore, that very startling statement will have convinced them that their Lord knows their inner dimension (something of the unseen – Ghayb) and will have itself fostered Iman in their hearts![5]

“If you obey Allāh and His Messenger, He will not undervalue your actions in any way. Allāh is Ever-Forgiving, Most Merciful.” If you obey Allāh and His Messenger, carrying out their commands and abstaining from their prohibitions, nothing of the reward of your actions will be diminished in the least, and your favour of having come to Islam without fighting the Muslims will be accepted.[6] Your cure is to spend some time learning from the Prophet (sall Allāhu ʿalayhi wa sallam) the true dictates of Iman during your stay in Madinah rather than boasting and asking for money.

After doing this, Allāh is Ghafūr, meaning oft-forgiving for those who obey Him. He is also Rahīm, meaning merciful towards those of His creatures who repent such that He will not punish them for those sins they have repented from. [7] Ghafūr and Rahīm are in the hyperbolised forms. Allāh will not only forgive a person’s bad actions before Islam as soon as they accept Islam, but He will also reward a person for the good actions they did before their Islam as well!

Your reality will inevitably be exposed by Allāh

It is clear from the verse and others that Allāh will ultimately bring out a person’s reality on their tongue and in their actions. If Iman, sincerity, truthfulness, righteousness, or any other positive trait is simply a claim, know that it will be tested such that the reality of that claim will be made clear. Allāh says:

“Do people imagine that they will be left to say, ‘We have Iman,’ and will not be tested? We tested those before them so that Allāh would know the truthful and would know the liars.”[8]

“If anyone wants to have his deeds widely publicised, Allāh will publicise (his humiliation). And if anyone makes a hypocritical display (of his deeds), Allāh will make a display of him.”[9]

This terrifying reality is again explained by the dictates of ‘you reap what you sow’ or ‘al-jazā’u min jins al ‘amal’. It is a serious warning to us to work hard on our intentions and purposes. Today’s world is overshadowed by superficial displays of righteousness and Da’wah, propelled by addictive social media recognition and popularity. How many of us interrogate ourselves as to whether we are truly speaking on behalf of Allāh? How many of us challenge ourselves on whether our actions are done to seek His pleasure and positive reform on earth, or whether we are simply riding the popularity wave and auditioning for Islamic celebrity status?

The most alarming thing might be the sheer number of Du’āt who are falling victim to people’s expectations and not coming out strong against the most important matters for fear of losing their positions, platforms, or popularity, or fearing the reaction of rulers. The verse highlights how Banū Asad’s reputation was tarnished through their very attempts to protect it. How many, fearing the implication on their own comfortable livelihoods, attempt to find religious justification for the abomination of their pseudo-religious authorities, only for their inconsistencies to appear and be called out by common Muslims? The Prophet (sall Allāhu ʿalayhi wa sallam) said:

As we will see in the forthcoming verses of al-Ḥujurāt in dealing with such ‘performances’ during comfortable and secure times, the true and sincere believers are those who surrender their wealth and even their own selves for the sake of Allāh. They internalise that their cause may cost their wealth or even their reputation, freedom, or lives. These people embody the Messenger’s unwavering zeal and sentiment when he set out from the very beginning, alone and ostracised, declaring:

“By Allāh, if they were to put the sun in my right and the moon in my left in return that I leave this matter (Islam), I will not leave it until it prevails or I die upon that.”[11]

And even if they were to do this, gratitude is still solely due to Allāh because:

And all praise and thanks are due to Allāh alone.