Quranic Community #5 | Manners with Allāh and His Prophet 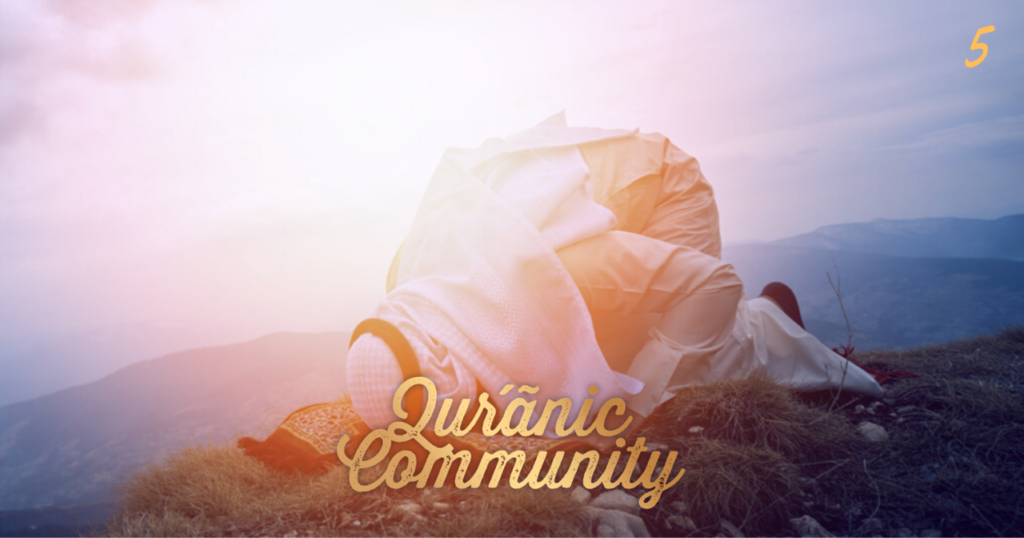 After laying the foundations of al-Ḥujurāt, touching on its thematic message, meticulous placement, and structure, let us shed light on the first of its five parts. This is the noblest and most rudimentary mannerism on which all objectively upright conduct and behaviour is founded. It is a call directed at those of Iman concerning how a person should behave with Allāh and His Messenger, instructing them not to put their speech or actions ahead of them. It advises that our own preferences, opinions, and actions are secondary to those decreed by Allāh and His Messenger. Those of Iman recognise that the Messenger (sall Allāhu ʿalayhi wa sallam) says nothing out of his own accord, but is the conveyor of Allāh’s Will and decree. Allāh says:

“Nor does he speak from whim. It is nothing but Revelation revealed.”[1]

“You who have Iman! do not put yourselves forward in front of Allāh and of His Messenger; and have Taqwa of Allāh. Allāh is All-Hearing, All-Knowing. You who have Iman! Do not raise your voices above the voice of the Prophet and do not be as loud when speaking to him as you are when speaking to one another, lest your actions should come to nothing without your realising it. Those who lower their voices when they are with the Messenger of Allāh are people whose hearts Allāh has tested for Taqwa. They will have forgiveness and an immense reward. As for those who call out to you from outside your private quarters, most of them do not use their intellect. If they had only been patient until you came out to them, it would have been better for them. But Allāh is Ever-Forgiving, Most Merciful.”[2]

“You who have Iman! Do not put yourselves forward in front of Allāh and of His Messenger, and have Taqwa of Allāh. Allāh is All-Hearing, All-Knowing.”[3]

The verse is understood as follows: you who have testified to the Oneness of Allāh, and the Prophethood of Mohammad (sall Allāhu ʿalayhi wa sallam), do not hasten in a matter involving your military or religious affairs before Allāh and His messenger issue their own decree, thereby deciding to the contrary to what Allāh and His messenger have decided. And have fear of Allāh in your hearts, in case that you should say what Allāh and His messenger have not permitted in any of your affairs. And be cognisant of Allāh, because Allāh hears what you say, knows well what you intend by your speech. Nothing is hidden from Him, not even your innermost thoughts.[4]

The judicious student of Tafsir will notice how in this concise statement, Imam al-Tabari (d. 310 AH) collects and harmonises many of the earliest opinions. His distinction in this approach has earnt his work the title ‘the Mother of all Tafasir’. This is notwithstanding the fact that many of the succeeding compilations based their works on the compilations and derivations of al-Tabari. In this particular verse, he brings together no less than five transmissions (Riwāyah) sourced from the earliest Qur’ānic exegetes (Mufassirūn) and analyses (Dirāyah) of these texts to produce an amicable conclusion.

To exemplify this, b. ‘Abbas (raḍiy Allāhu ʿanhu) expounds on the verse by saying: “Do not say what is contrary to the Qur’ān and Sunnah.” Mujahid, a student of Ibn ‘Abbas, said: “Do not precede the Prophet (sall Allāhu ʿalayhi wa sallam) in (proclaiming) anything until Allāh decrees it on his tongue (first).” Qatadah explains it by way of providing an example, adding: “Some people used to say ‘if only such and such was revealed, then such and such a ruling would no longer apply’.” Thus, the instruction was to counter such sentiments. Al-Hasan al-Basri relates that some people sacrificed their Udḥiyah before the Prophet (sall Allāhu ʿalayhi wa sallam) sacrificed his own, whilst others like al-Daḥak indicated that the verse refers specifically to matters of war, in which some produced opinions contrary to that of the Prophet.[5]

These opinions are primarily different ways of expressing the same meaning using different expressions, or illustrative examples derived from the same meaning. This is what is known in the sciences of Tafsir as Ikhtilāf al-Tanawwu’, or complimentary differences of opinion. In the realm of the earliest Tafsir, this is the most common form of difference and is conciliatory in nature as it is of no real difference.[6] Imam al-Tabari commonly weaves together all such opinions when presenting his Tafsir, only giving preference of one opinion over another when they cannot be reconciled. With this in mind, the verse “do not put yourselves ahead of Allāh and His Messenger” can be understood as a prohibition of putting oneself forward and ahead of Allāh and His Messenger in absolutely anything.

“Yā ayyuha allathīna āmanū” (you who have believed) is a statement that creates anticipation on the part of the receiver. The characteristic of those ‘who have believed’ is to give the listener an admirable and valued identity that makes them more likely to obey the instruction that will follow.[7] The heart of the recipient is softened and prepared for the firm reminder that will follow, empathising with the defiant nature of man when presented with reprimand or advice. The word tuqaddimū, understood as tataqaddamū, depicts one physically walking in front of the Messenger and leaving him behind.[8] This profoundly impersonates the speech or action and delivers to the recipient its gravity.

Linguistically, the ‘object’ or the Maf’ūl is excluded. The Arabic can literally be rendered as ‘do not put… ahead of Allāh and His Messenger’. No particular ‘thing’ is noted. This ‘omission’ has the interesting effect of encapsulating anything and everything. It is almost as if to say, ‘do not put … anything of your choosing, be it an opinion, a statement, or an action ahead of what Allāh and His Messenger have already directed. For the Prophet’s will (sall Allāhu ʿalayhi wa sallam) is in harmony with that of Allāh.

The prohibition here does not necessarily imply that anyone in the Prophetic community necessarily put themselves forward of Allāh or His Messenger. It is only by way of warning. Moreover, it applies if it is possible to ascertain the Prophet’s (sall Allāhu ʿalayhi wa sallam) decree in the first place. If he is absent, then one’s best judgement based on objective knowledge and effort can be exercised.

It should be noted that ‘obedience’ is, in general, either absolute or conditional. This meaning is exemplified in wording of the verse previously quoted:

“You who have Iman! Obey Allāh and obey the Messenger and those in command among you.”[9]

Note that, unlike the absolute obedience afforded to Allāh and His Messenger in this verse and verse 1 of al-Ḥujurāt through the repeated command ‘obey’, the instruction to the third group (“those in command among you”) was not preceded with ‘obey’. The linguistic implication would be that the obedience afforded to this latter group, either those in political authority or otherwise, is necessary but conditional upon themselves obeying Allāh and His Messenger in dispensing the affairs of their subordinates. The obedience is thus an Islamically legal type of obedience (Shar’iyyah) in anything other than sin, not a tyrannical one (Taghutiyyah).[10]

Therefore, those in command cannot be obeyed if they command what displeases Allāh and His Messenger. Conversely, following them in what does please Allāh is part of obeying Him. This reality is entirely contrary to some voices in certain Muslim circles. Obedience to the fallible ‘ruler’ (waliyyul ‘amr) can never be absolute, even by the dictates of logic. Islam came to affirm one form of absolute servitude and to abolish the rest. The primary role of the waliyyul ‘amr is to reflect the will of Allāh on Earth, not to deform it in favour of his own throne, territory, and causes of injustice. Note that the previous verse states:

“Allāh commands you to return to their owners the things you hold on trust and, when you judge between people, to judge with justice. How excellent is what Allāh exhorts you to do! Allāh is All-Hearing, All-Seeing.”[11]

Would the verse of obedience grant obedience to the squanderers of trusts and advocates of injustice?

“It is obligatory upon a Muslim to listen (to the ruler) and obey whether he likes it or not, except when he is ordered to do a sinful thing. In such a case, there is no obligation to listen or to obey.”[12]

Abu Bakr’s (raḍiy Allāhu ʿanhu) first words in his first ascent to the eminent pulpit of the Khilafah after the Messenger (sall Allāhu ʿalayhi wa sallam) were: “Obey me, so long as I obey Allāh. And should I stop obeying Allāh, that requirement of obedience towards me is no longer.”[13]

It is therefore of the worst forms of deception and betrayal of trust for leaders to first go against Allāh’s Will on Earth then employ their royal clergy to demand unconditional obedience, utilising decontextualized evidences related to obeying worthy leaders before slamming critics as heretics and Khawārij. Islam came to free people from the manacles and degradation of enslavement to men, to the unlimited expanse and empowerment of serving the Creator, individually and collectively. Every human after the Messenger of Allāh is a subject under Allāh and His Messenger and accountable to Allāh.

In this intense and wholesome narration, the prioritisation by Mu’ath is clear. The Qur’ān, accompanied by the Sunnah, are clarifying of everything either explicitly or by derivation upon the general objectives they set out. Where that guidance is explicit, it prevails over our own, yet our views and opinions have undeniable weight in areas that Islam has given leeway.

Ijtihād is likewise not Taqdīm, as a Mujtahid will try his best to work within the parameters of Islam. In the absence of definitive guidance, or in situations where accessibility to knowledge is scarce, a Muslim should be cognisant with what Islam seeks out. These are the preservation of faith, justice, fairness, chastity, life, and health. Therefore, within these parameters, a Muslim can make a well-intentioned and objective decision, being true to oneself, even if it contradicts one’s personal inclinations.

Finally, let us actively nurture our hearts upon the belief that our Creator and Cherisher, Allāh, and His select Prophet and Messenger (sall Allāhu ʿalayhi wa sallam), know best. The measure of success is that we harbour no discomfort towards divine directives. If you find yourself longing that something was made halal or another were haram, sit down with yourself and tell your heart again that He Who created you knows what is best for you.

And all praise and thanks belong to Allāh alone.

[15] Abu Dāwūd. There is a vast difference of opinion concerning the authenticity of this Hadith, but many scholars have accepted it and it has a number of corroborating reports that support it.