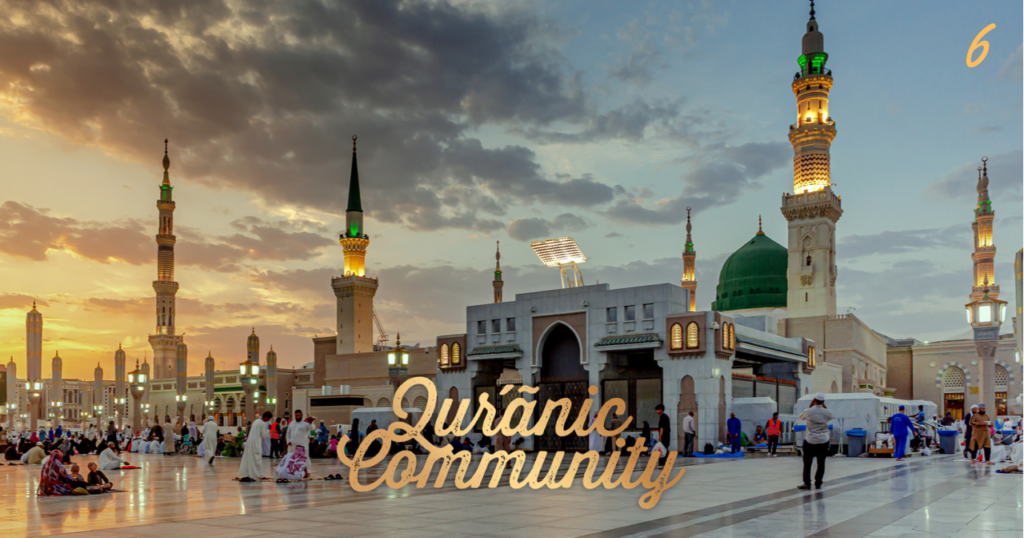 In the previous article, we introduced the first section of Surah al-Ḥujurāt governing our manners with Allāh and His Messenger (sall Allāhu ʿalayhi wa sallam). This chapter appeals to one’s Iman, a part of which is recognising the prominence and precedence of Allāh and His Messenger. Once recognised, the call is repeated again and again to underpin the abundant mannerisms afforded to the rest of creation.

In 1908, Ottoman ruler Sultan Abdul Hamid II inaugurated the nearly 1500 km Hejaz railway, which connected Istanbul to the Hejaz to primarily serve pilgrims to Makkah. An entire wagon was dedicated as a Masjid with a full time Mu’athin (caller to prayer). The journey between Damascus and Madinah, which would take 40 days on camel, was reduced to 72 hours. Intriguingly, engineers had coated the nails on the tracks approaching the Madinah station and the trains’ wheels with felt – a material made with compressed natural fibres.[1] This was to reduce the rumbling sound of the train in the Prophet’s revered presence and to embody the verse:

“You who have Iman! Do not raise your voices above the voice of the Prophet and do not be as loud when speaking to him as you are when speaking to one another, lest your actions should come to nothing without your realising it.”[2]

The verse is understood as follows: you who have believed in Allāh and His Messenger, do not raise your voices above that of the Messenger of Allāh, speaking harshly to him or addressing him bluntly. Likewise, do not address him the same way you would address one another, using his plain name ‘Muhammad’ rather than his respectable title such as ‘Prophet of Allāh’ or ‘Messenger of Allāh’. Raising your voices above that of your Prophet will render your actions obsolete, not rewarded without you even noticing.[3]

Supporting this meaning, Allāh says in another verse:

“Do not make [your] calling of the Messenger among yourselves as the call of one of you to another.”[4]

Raising your Voice – A Cause to Nullify Your Deeds

The natural question is how can an instance of raising one’s voice above the decibel level of the Messenger (sall Allāhu ʿalayhi wa sallam) render all of one’s actions entirely obsolete? This is particularly important when it is known that actions only become entirely obsolete when one revokes Islam (Kufr).

“As for any of you who revert from their Dīn and dies a Kāfir, their actions will come to nothing in this world and the Next World. They are the Companions of the Fire, remaining in it timelessly, for ever.”[6]

The short answer is that contempt of any degree is the very first step to outright defiance and rejection. ‘Contempt of court’ in most countries is a heinous offence as it defies legal authority and shakes the necessary basis of the judiciary being above the rest. The Messenger (sall Allāhu ʿalayhi wa sallam), as the definitive authority, is worthier of such dispensation. Thus, nothing should be put above him – neither voice nor action – or else all of Islam’s jurisdiction is downgraded.

B. ‘Atiyyah explains that such an action can develop religious detachment in the heart. If a person becomes accustomed to it, their convictions may continue to recede until they are led to Kufr[7] or equivalently intentional contempt. It is therefore a gradual decline in one’s veneration, starting from something we may see as trivial (one’s spoken volume) and developing into what is worse. B. ʿĀshūr adds: “Repeatedly disrespecting the Prophet (sall Allāhu ʿalayhi wa sallam) will make one accustomed to it, until its continuity causes the Prophet’s veneration to lessen in oneself … until that person sees no need to show him respect at all and this is Kufr.”

The fact that this Kufr can occur “without your realising” is because whilst a person vividly recognises binary changes of religious state (from Iman to Kufr), he or she hardly senses very gradual diminishment. The verse could also be understood to mean that some of one’s actions will diminish (the amount of which Allāh knows).[8]

The Messenger is Unlike Anyone Else

Al-Ḥujurāt teaches us that the very first and most paramount dimension of ethical development is to appreciate that the Messenger of Allāh (sall Allāhu ʿalayhi wa sallam) is unlike anyone else. Every person’s directives and subjective understanding of ethics are open to being challenged, held to account, or disagreed with, except the Prophet (sall Allāhu ʿalayhi wa sallam). Abdullah b. ‘Abbas rady Allahu ‘anhu is reported to have said:

“There are none except that you can take from their words or reject except the Prophet (sall Allāhu ʿalayhi wa sallam).”[9]

He is the reference from whose mouth only flows the truth, and he is infallible in the information he delivers about Allāh. As such, his actions and verdicts are naturally superior, and his status is unique and protected. His position with Allāh is unlike anyone or anything else and he is decisively Allāh’s greatest slave and Messenger.

As much as we try, we will fail to appreciate the true extent of his greatness, but take the following examples to bring us somewhat closer. If you search the entire Qur’ān, you will notice that that Allāh, the King of Kings, never addressed his Prophet Mohammad (sall Allāhu ʿalayhi wa sallam) by his plain, direct name of “yā Mohammad”. Other prophets were abundantly addressed in this way: “yā Adam,”[10] “yā Nuh,”[11] “yā Ibrahim,”[12] “yā Musa,”[13] and so on.[14] The addresses of ‘yā’ when used to address the Final Messenger are instead always associated with his characteristic or title. For example, “yā ayuha al-Rasool” (‘O Messenger’) and “yā ayuha al-Nabi” (‘O Prophet’). If his Creator has given him such status and honour, addressing him only by his distinguished status and title, who are we as his followers to afford him anything else?

Moreover, Allāh praises his intellect, manners, heart, body, eyesight, reputation, companions, and household. His esteemed status is both in the explicit and subtle Qur’ānic discourse. Consider another fascinating and beautifully subtle inference to his unrivalled eminence in the Eyes of the Divine. When the Qur’ān speaks of Musa (‘alayhi al-Salām) being spoken to, Allāh uses this account as a testament to the truthfulness of the Qur’ān, as Mohammad (sall Allāhu ʿalayhi wa sallam) was not present to relate the incident at first hand. We know that Musa (‘alayhi al-Salām) was on the right-hand side of the mountain when he was addressed:

“We called out to him from the right-hand side of the Mount and We brought him near in close communication.”[15]

But Allāh proceeded to negate His beloved Messenger’s (sall Allāhu ʿalayhi wa sallam) presence on the right-hand side, saying:

“You were not on the western side when We gave Musa the command. You were not a witness.”[16]

Focus on this treasurable subtlety. To extol and elevate his Prophet (sall Allāhu ʿalayhi wa sallam), who is forever on the right side, Allāh chose to say “you were not on the western side”, rather than “you were not on the right side.” This is done in case it comes across as negating the favoured ‘right’ from His Messenger and giving the impression that the opposite is implied.[17]

It comes as no surprise that your decibel level should not go above that of the Prophet, even as he rests silently in his purified grave.[18] He is to be shown respect alive as he is when he is in the grave. The area of his grave is not a place for chatter, selfies, or pushing and shoving. Instead, it should be a place of serenity, majesty, seriousness, and deliberation.

Your veneration of Allāh’s chosen Messenger is tantamount to your veneration of Allāh Who selected him (sall Allāhu ʿalayhi wa sallam). This is but a prelude to a whole selection of manners and ethics that will build wholesome individuals, families, societies, and nations that are firmly bonded and perfectly structured.

And Allāh is the source of strength.

[17] Mentioned to this effect by Sheikh Salih al-Maghamsi