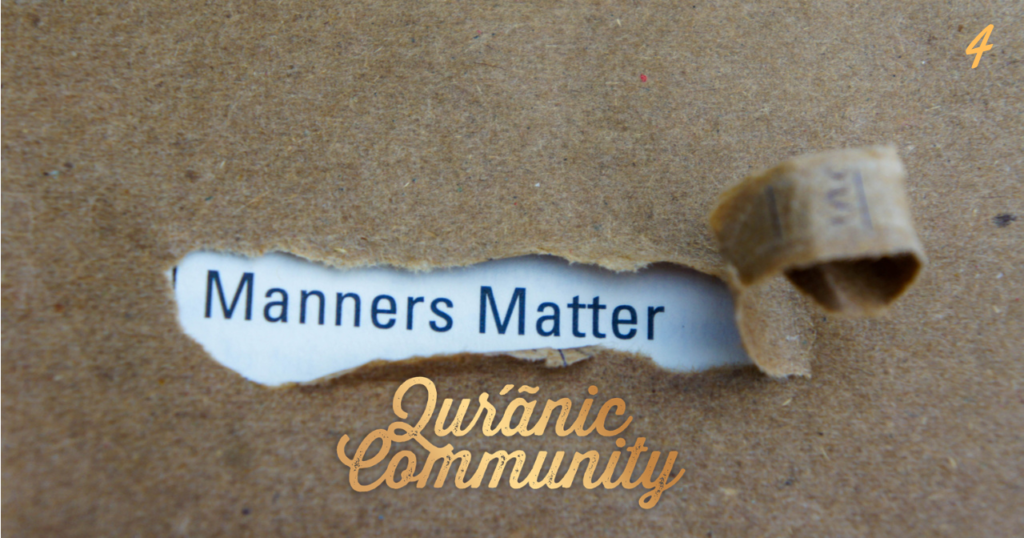 Humans are natured upon loving good character. A person of great character is the recognised master of his or her community. No religion has divulged into the importance of great manners more than Islam, the religion of the natural disposition (Fitrah). The uniqueness of Islam, moreover, is that it has firmly tied mannerisms with eternal salvation, as well as emphasising their worldly benefits. Nothing improves a person’s morality and ethics more than to believe in accountability after death or to have Iman.

Sometimes a gesture of good happens to bring a person no satisfaction, no financial reward, and no appreciation. If the recipient of your gesture is an orphan, he or she will be too young to be able to pay you back or even thank you, and has no parents to do so on his or her behalf. A believer will nonetheless still be there for them, never rebuffing them, because of their Iman. A Mu’min will hope for Allāh’s recognition in the afterlife, even if it never comes from the vulnerable recipient. Ponder over these two verses side by side where Allāh says:

“Have you seen him who denies the recompense (in the last day)?

He is the one who harshly rebuffs the orphan…”[1]

Al-Ḥujurāt’s general message, as discussed in the previous article, is to ‘nurture the behaviour of the Muslim Ummah.’ It begins with the necessity of revering Allāh and His Prophet and appreciating the social structure of a Muslim civilisation. This becomes a premise and reference for what follows: being able to objectively verify news, obey leadership and those in charge, dispel differences, resolve conflict, and reconcile between believers. The Surah thus becomes almost an embellishment of the verse:

The Surah then extrapolates on general etiquettes and mannerisms, many of which concern the ‘hidden’ dimension, such as ‘good suspicion’, back-biting, spying, and so on. Thus, where matters are dubious and ‘unknown’, the Surah emphasises that knowledge of such ‘unseen’ matters must be returned to Allāh and can never stand as a basis for judgement. Most conflicts occur by revealing unseen matters, such as suspecting the worst, spying on what was otherwise ‘hidden’, and revealing what was otherwise unknown to others.

Nations are Manners, So Long As They Remain

Al-Ḥujurāt’s mannerisms are timeless, and it is through them that Islam prevailed in all four corners of the Earth, leading other nations by example and attracting droves of others to accept it. Supreme manners, besides other exclusivities, are the hallmark of Islamic empires. It is remarkable that the nations of East Asia, archetypically known for their excellent social ethics, are those that embraced Islam after being impressed by the superior ethics exhibited by the companions. Many have thus associated this Surah with building Muslim civilisation. Its message can be understood beyond the individual level and on a global political level.

Internal strife and conflict that bring down a nation after separating families and friends begin with either the external misbehaviour of either party or due to internal blemished ideas and suspicions about one another. All the while, conflict is exacerbated when the concept of Islamic brotherhood (Ukhuwwah) is undermined. Al-Ḥujurāt unpicks every one of these issues, one after the other, thereby fortifying families, friends, and the community and nation. The Egyptian poet Ahmed Shawqi famously said:

“Nations are nothing but manners, so long as they remain. If their manners depart, so too will nations.”

Your Manners are Perceived as Islam

According to the Syrian scholar Prof. Mohammed Rateb al-Nabulsi, the Muslim in the Muslim world is recognised as an individual. His ill manners fall against himself, exclusively by name. In the West, however, the Muslim is perceived as Islam itself, irrespective of how much we try to emphasise the separation between ‘Islam’ and ‘Muslims’. Your colleagues have not read the Qur’ān or Sunnah, nor will they read the Sīrah. You are the manifestation of Islam as far as they are concerned. For one, manners speak much louder than words. As the representatives of Islam in the West, this is both a considerable burden but also a huge opportunity.

Consider a cloudy and rainy Sunday afternoon. A lonely student sits in their tiny student apartment asking themselves if there is more to life than this materialistic rat race. His or her disposition is knocking on their conscience. Suddenly, they get a message on their phone: a video of Muslims brawling, or fighting with the police. They are left saying, ‘I would never do something like that’. This is one of the connotations of Allāh’s words:

“Our Lord! Make us not a trial for the disbelievers, and forgive us, Our Lord! Verily, You, only You, are the All-Mighty, the All-Wise.”[3]

We become a trial through our poor conduct and disgraceful circumstances, thereby causing a non-Muslim to feel confident that by rejecting Islam, he or she must be doing the right thing! In this respect, our actions end up creating a more fervent rejection of Iman rather than an inclination towards it.

Our separation of ‘religiosity’ and manners is, in fact, also becoming a Fitnah for Muslims, particularly as the typical practicing Muslim becomes known for nothing but rigidness, argumentation, and refutation. In our locality, a marriage between two practicing individuals was hampered after the brother refused to meet the father of the sister (her legal guardian – waliy) since he perceived him an ‘innovator’. Regardless of his incorrect assessment, imagine if that father was faint-hearted; what ought to become of his perception of practicing young brothers the next time they propose? The Prophet (sall Allāhu ʿalayhi wa sallam), in fact, makes manners one of two conditions women and their legal guardians should seek out in marriage:

“When someone whose religion and character you are pleased with proposes to (someone under the care) of one of you, then marry to him. If you do not do so, then there will be turmoil (Fitnah) in the land and abounding discord (Fasād).“[4]

Those who perceive manners and religiosity as separable concepts play a contributory role in the Fitnah that ensues from families electing to marry their daughters to non-practicing men who happen to be ‘well-mannered’, fearing the mercilessness and harshness of the opposite. But more importantly, how valuable are prescribed acts of worship or our external attire if we behave without any Islamic regulation? The Prophet (sall Allāhu ʿalayhi wa sallam) said:

“Nothing is heavier on the believer’s Scale on the Day of Judgment than good character. For indeed Allāh, Most High, is angered by the shameless obscene person.”[5]

“The most beloved among you to me, and the nearest to sit with me on the Day of Judgment, is the best of you in character.”

“A believer will reach through good manners the rank of one who prays during the night and observes fasting during the day.”[6]

By Allāh’s permission we will extrapolate further on this in later parts. All praise and thanks are due to Allāh alone.