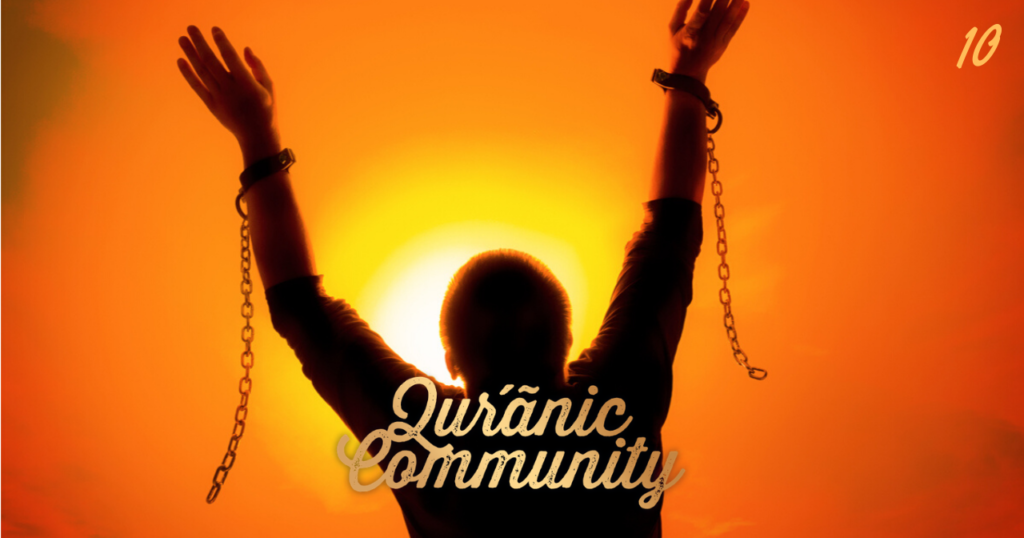 After calling believers to show due respect to the greatest Messenger and Seal of the Prophets (sall Allāhu ʿalayhi wa sallam), Allāh cautioned that choosing to follow he whose moral compass is fragile – the Fāsiq – is bound to bring regret. Regret not only for erring against an innocent people, but for carrying the religious burden of that crime. Every sin comes with its exhausting physical and spiritual burden, in this world and the next that the Prophet (sall Allāhu ʿalayhi wa sallam) came to eliminate.

“Know that the Messenger of Allāh is among you. If he were to obey you in many things, you would suffer for it. However, Allāh has given you love of Iman and made it pleasing to your hearts, and has made Kufr, deviance, and disobedience hateful to you. People such as these are rightly guided.”[1]

Know well, people of Iman, that the Messenger of Allāh (sall Allāhu ʿalayhi wa sallam) is among you. For that reason, have Taqwa of Allāh, in case you say what is false and make up lies because Allāh conveys your news to him and guides him to what is right in his matters. Had the Messenger of Allāh acted upon your opinions, you would suffer difficulties and fatigue in a lot of your affairs.[2] However, Allāh has  given you the love of Iman in Allāh and His Messenger. You obey the Messenger of Allāh and are underneath his charge, and by this Allāh has saved you from that suffering. Moreover, Iman has been perfected in your hearts, so you believed. Allāh has made Kufr (denial of Allāh and disbelief in Him), Fusūq (dishonesty), and ‘Isyān (doing what Allāh has prohibited by going against His Messenger and forsaking his instructions) disliked to you.

These people are the Rāshidūn, the followers of the path of truth.[3] Fusūq, as alluded to earlier, can also refer to major sins, whilst ‘Isyān can be a reference to lesser sins. With this understanding, the verse outlines, in decreasing order of severity, three detestable things to the believer who appreciates his or her truest benefit and is upon a sound disposition: disbelief, major sins, and even lesser sins.[4] Following this Qur’ānic style and content, one can wholesomely implore Allāh in Du’ā:

“Allāh, make Iman beloved to us and make it pleasing to our hearts, and make Kufr, deviance and disobedience hateful to us.”[5]

The Messenger of Allāh (sall Allāhu ʿalayhi wa sallam) is amongst you. He, transmitting from the Creator, knows better your own interests, and has been tempered by His Lord to be more concerned about you than your own selves. The opinions he makes on your behalf are thus more beneficial to you than the opinions you make for yourselves.[6] Elsewhere, Allāh says:

“The Prophet is more worthy of the believers than themselves.”[7]

He is the worthiest of their obedience and loyalty and simultaneously more concerned for them than they are for one another.

The order i’lamū (know that) is used to create a sense of suspense and weight towards what is about to be said: “The Messenger of Allāh is among you.” In effect, the companions already ‘know’ that the Messenger (sall Allāhu ʿalayhi wa sallam) is there. The prompt therefore implies warning, almost as if to say: be careful and heedful, the Noble Messenger is present and the heavenly link to Allāh through live revelation is intact. Even after his physical presence, his guidance is ever-present in his Sunnah and legislation,[8] which are more worthy of being followed than our personal desires.

“If he were to obey you in many things,” in this case, refers to the fact that if your internal wishes were different to what he wishes, “you would suffer for it.” ‘Many things’, at the same time, excludes absolutely everything, leaving way for those things outside the remit of the Sharī’ah that Islam gives Muslims the privilege to make their own judgements in. Included are issues where the Prophet himself consulted with the companions, such as where to position the army on the day of Badr. “However, Allāh has given you love of Iman;” included in Iman is the religion Islam itself, not merely its inner convictions or ‘belief system’. Thus, the verse can be understood as follows: Allāh has given you the love of Islam and Iman, as well as all the rules and regulations in the religion of Allāh brought by His Messenger.

Allāh says to His Prophet in another verse:

“No, by your Lord, they will not believe (have Iman) until they make you their judge in the disputes that break out between them, and then find no resistance within themselves to what you decide and submit themselves completely.”[10]

“You would Suffer for it”

It may seem counter-intuitive that personal sinful desires draw personal harm. Is being told what to do not more cumbersome and burdening? In the era dubbed the ‘Enlightenment’, people were told that godlessness, secularism and liberalism; ‘doing whatever one desired’ would remove their shackles and be their salvation from dogmatic theocracies. It will make them happy. It takes little to show how cock-eyed these philosophies were in seeking to address suffering in the ‘free world’ beleaguered with depression and suicide.[12] It seems absurd to many that divine regulation can address human suffering and liberate one from the distressful fetters brought about by vice. This is, however, obvious to the Mu’min who recognises that the One Who Created knows what best serves the interests of His Creatures:

“Know that the Messenger of Allāh is among you. If he were to obey you in many things, you would suffer for it.”[13]

Allāh created us for Paradise, and that is our place of origin. We were removed from the home of comfort and happiness to be trapped in a place of fatigue and misery through the perception of unrestricted liberty. Iblīs the Shaytān lost the company of angels in the heavens to being humiliated and debased through the same. The Pharaoh went further to claim divinity for himself, boasting: “Does not the kingdom of Egypt belong to me, and these rivers flowing beneath me; do you not see?”[14] The same water surged over his head, bringing an end to his comfort and ease.

“How many gardens and fountains they left behind, and ripe crops and noble residences. What comfort and ease they had delighted in! So it was. Yet We inherited these things to another people”[15]

The devastating consequences of sinning against Allāh are so far-reaching that they enter into every part of a person’s livelihood and every phase of a person’s worldly existence and the Hereafter. The Prophet (sall Allāhu ʿalayhi wa sallam) said:

“Immorality never appears among a people to such an extent that they commit it openly, but plagues and diseases that were never known among the predecessors will spread among them. They do not cheat in weights and measures but they will be stricken with famine, severe calamity, and the oppression of their rulers. They do not withhold the Zakāh of their wealth, but rain will be withheld from the sky, and were it not for animals, no rain would fall on them.”[16]

“This is because a believer’s strength is sourced from his heart, the stronger his heart, the stronger the body. Even if the sinner’s body is strong, he will be let down and deceived by it when he needs it most. Look at how the powerful bodies of the Persians and Romans let them down when they needed them most and were crushed by the Muslims due to the strength of the latter’s bodies and hearts.”[17]

When Allāh decrees for the nations of Gog and Magog (Ya’jūj and Ma’jūj) to wreak havoc on earth, the combined force of humanity will not be able to stop them. Concerning this prophecy, our mother Zainab (raḍiy Allāhu ‘anha) asked the Messenger (sall Allāhu ʿalayhi wa sallam):

“Allāh’s Messenger! Shall we be destroyed though amongst us there are pious people?” He said: “Yes, if vice becomes rampant.”[18]

Your suffering is distressing to him

“Those who follow the Messenger, the unlettered prophet, whom they find written in what they have of the Torah and the Gospel, who enjoins upon them what is right and forbids them what is wrong and makes lawful for them the good things and prohibits for them the evil and relieves them of their burden and the shackles which were upon them.”[19]

The lawful is equivalently beneficial, and the unlawful detrimental. Read that “if he were to obey you in many things, you would suffer for it,”[20] then read “your suffering is distressing to him; he is deeply concerned for you; he is gentle and merciful to the believers.”[21] Now ask yourself, if my suffering causes the Messenger distress, then how could his guidance possibly be the very cause of my distress? It is the essence of comfort and rescue. The Messenger (sall Allāhu ʿalayhi wa sallam) was sent so desperate for our deliverance from that distress that he exclaimed he were:

“Like that of a man who came to some people and said, ‘I have seen with my own eyes the enemy forces.’” Heedless of his warning, he took off his clothes, simply to draw their attention to him, so that he can warn them of what awaits. He said:

“I am a naked warner (to you) so save yourself, save yourself! A group of them obeyed him and went out at night, slowly and stealthily and were safe, while another group did not believe him and thus the army took them in the morning and destroyed them.”[22]

The notion that we can do and believe whatever we like is much like insects swarming towards a furious flame, mesmerised but oblivious to where we will land. And the Messenger of Allāh (sall Allāhu ʿalayhi wa sallam) is making every effort to stop us and take us out:

“I am going to hold you back from fire, but you are slipping from my hand.”[23]

Besides his way, worldly happiness and freedom and eternal salvation is unattainable. Besides the light Allāh gives, there is simply no light.

And all praise and thanks are due to Allah.

[12] According to NHS figures, one in four females and one in five males in are clinically depressed. In the UK alone, there were up to 65 million prescriptions of antidepressants in 2016, up by 100% in 10 years. Before blaming wealth, suicide rates are staggering the highest amongst middle-aged and even middle-class men.