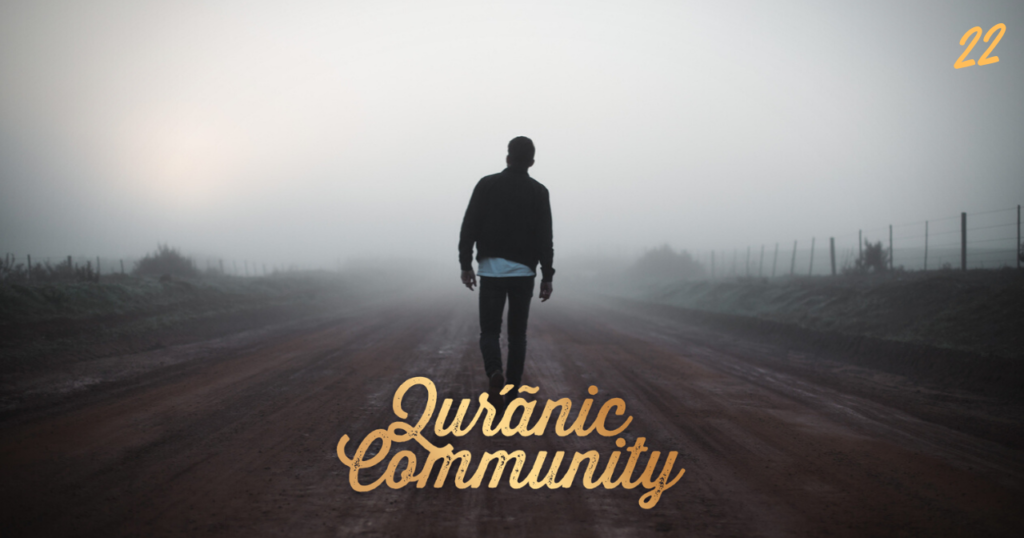 It is said that the Bedouins of Banu Asad who came to the Prophet (sall Allāhu ʿalayhi wa sallam) professing their Islam during a rainless year would throw their rubbish in the walkways of Madinah. Their surge on the markets also inflated the prices of its commodities. Despite this, they would plead for Sadaqah, reasoning that they came as believers carrying all their belongings to Madinah, and that they did not fight the Prophet (sall Allāhu ʿalayhi wa sallam) as others did.

Gratitude is Entirely due to Allāh and His Messenger

The son or daughter are obliged to obey their parents knowing well that they will never be able to repay their favours, let alone to perceive the obedience afforded to them as a ‘favour’! What, then, if the person is persistently the recipient of the favour, much like a baby demanding gratitude from his or her mother?

Nothing can match the Prophet’s favour towards us. If having everything besides the Prophet’s guidance does not earn one salvation, it follows that the Prophet’s guidance is much more valuable than everything. As such, no level of gratitude or service can truly match it. During the Battle of Hunayn, occurring just one year before the incident of Banu Asad boasting about their Islam, the Prophet (sall Allāhu ʿalayhi wa sallam) had distributed the spoils between members of Quraish and other Arab tribes who were new Muslims, leaving nothing for the Ansār.

Pause here and recall who the Ansār were. It was Sa’d b. Mu’ādh (rady Allāhu ‘anhu), from the Ansār who represented them at Badr when they left Madinah not intending to fight. They were unexpectedly confronted with some 1000 soldiers who sought nothing less than their extermination. Despite this, Sa’d got up and declared:

“We believed (Āmannā) in you, we declare your truth, and we witness that what you have brought us is the truth, and we have given you our word and agreement to hear and obey; so go wherever you wish, we are with you. By He who sent you, if you were to ask us to cross this sea and you plunged into it, we would plunge into it with you; not a man would stay behind.”[3]

It was the Ansār who hosted the Messenger of Allāh (sall Allāhu ʿalayhi wa sallam) and surrendered everything for him after he was exiled from Makkah and violently banished from Ta’if. In Uhud, when the tables turned in favour of Quraish, the Ansār planted themselves firmly around the Messenger. Out of the 70 companions who were martyred in the Battle of Uhud, almost all of them were from the Ansār. They and their families were dealt the largest human and material blow they had seen. Naturally, with such standard and sacrifice, the Ansār felt excluded during the distribution at Hunayn.

Sa’d b. ‘Ubādah, their leader, was asked to honestly convey their feelings to the Prophet (sall Allāhu ʿalayhi wa sallam). These were the impressive Ansār, the greatest instance of civilisation, the sincerest and fullest in their Iman and the truest to that Iman by their immense sacrifice and Jihad. The Messenger’s testimony to them was nothing less than extraordinary. He gave them no spoils, instead expressing realities worth far beyond all the universe’s material treasures. He was addressing fertile hearts containing the apex of Iman and certainty. He asked Sa’d to gather the Ansār and none but the Ansār. Then the noble Messenger (sall Allāhu ʿalayhi wa sallam) entered, thanking Allāh and praising Him. Then, addressing his enduring helpers, he said:

He (sall Allāhu ʿalayhi wa sallam) said: “Had you by Allāh so wished you could have said – and you would have spoken the truth and been believed – (you could have said) ‘you (Messenger) came to us rejected and we believed you; deserted and we helped you; a fugitive and we took you in; poor and we comforted you.’ Are you disturbed in mind because of the good things of this life by which I win over a people that they may become Muslims while I entrust you to your Islam? Are you not satisfied that men take away flocks and herds while you take back with you the Messenger of Allāh? By him in whose hand is the soul of Muhammad, if it were not for the migration (from Makkah to Madinah), I would have been of the Ansār myself. If everyone went one way and the Ansār went another, I would take the way of the Ansār. O Allāh, send Your mercy on the Ansār, the children of the Ansār, and the grandchildren of the Ansār.”

If you desire to do the minimum, the very basics, ensuring that Islam has minimum effect on your material lives and minimum impact on your worldly fortunes, you have that choice. But naturally, do not expect the position of the Ansār. The true believers are those who strive, meaning they will need to compromise certain desires and joys. There are many dos and don’ts as a Muslim. Your conduct, your dress code, your modesty, and your relationships are all regulated by Islam. When you feel it becoming burdensome, remember that nothing comes without sacrifice. Remember that the greater the sacrifice, the greater the reward.

Some of us will pray and fast Ramadan then as soon as the Salah or Ramadan end, we act like birds who were trapped in a cage, eager to fly away. Our rushed and unconscious demeanour in ‘Ibādah sometimes emerges from the feeling that ‘we are doing enough’, almost as if Allāh should be grateful to us! Others may instead do good, anticipating that they have earned ‘credit to sin’, which is an indirect perception of ‘doing Allāh a favour’. Our ‘Ibādah is our gratitude to Allāh that He allowed us the privilege of worshipping Him to begin with. Those after the Battle of Hunayn who gave little took all the herds, flocks, and booty. Those who gave their souls, their comforts, and their whole lives for Allāh and His Messenger, putting them both forward of their own selves, took with them exactly that – their preference of Allāh and His Messenger, above which there is no greater favour.

“It is a great favour from Allāh and a blessing. Allāh is All-Knowing, All-Wise.”

‘Abdullah b. Hisham (rady Allāhu ‘anhu) reports that: “We were with the Prophet (sall Allāhu ʿalayhi wa sallam) and he was holding the hand of ‘Umar b. al-Khattab. `Umar said to him: 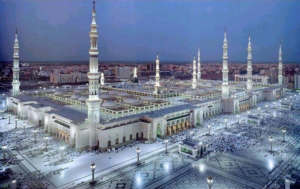 Notice that Allāh did not say: “tell them not to say ‘āmannā’”, but rather “lam tu’minū” (‘you do not have Iman’). There is no doubt that Allāh wants people to say ‘āmannā’, but for them to say it not out of Mann or hollowness but truth, sincerity, and validation.[6] Allāh says in another verse, praising the followers of ‘Isa (ʿalayhi al-Salām) and speaking of when he asked his followers:

“’Who will be my helpers to Allāh?’ The disciples said, ‘We are Allāh’s helpers. We believe in Allāh (āmannā billāh). Bear witness that we are Muslims.’”[7]

In their case they were honest in their expression and wanting to support ‘Isa (ʿalayhi al-Salām) and so Allāh supported them against those who rejected him.

In another verse, Allāh praises the believers who:

“Those who say, ‘Our Lord, we have Iman (āmannā), so forgive us our wrong actions and safeguard us from the punishment of the Fire.’ (Who are they?) The steadfast, the truthful (in their Iman, speech, and exteriors), the obedient, the givers, and those who seek forgiveness before dawn.”[8]

What we have presented is only a brief glimpse into a university of ethics, manners, and realities contained in this spectacular Surah of the Qur’ān. We have attempted to show the interdependencies between ethics and Iman, as well as the entrenched relationship between the two. Iman is beyond a claim, dress code, or a superficial narrative. It requires earnest effort. It begins with putting Allāh and His Messenger first in truth. It involves truthfully probing one’s own desires and inclinations and scrutinising them if they are contrary to the preferences of the Creator, as He and His Messenger know best. Such a preference then permeates the nation’s political and social structures, applying at all levels. The leader is also a subject, commissioned to dispense the Creator’s Will and precedence on earth.

Of a leader’s structural priorities is to establish firm social justice, systematically maintaining the honour and integrity of the Mu’min. Hearsay and gossip are feeble grounds for drawing judgement against an order established on Iman, let alone if such were to emanate from one with a frail heart and conscience; a Fāsiq. Were man to impulsively and unjustifiably react, assailing his siblings in Iman, the rest of that community should impulsively reconcile, restoring harmony and mercy in the Prophetic community.

Even if they are mistaken, they are your own siblings in Iman, a divinely inspired link that surpasses all other associations. It is a link based on both external and internal convictions and values. Physical conflict cannot be pre-emptively averted, nor can true brotherhood be realised without regulating our external and internal interactions with our siblings. Thus, do not upset your siblings by belittling, offending, or labelling them in their presence. In their absence, such is the equivalent of backbiting them, akin to eating their dead flesh. Weed out your negative sentiments from the secret depths of your hearts.

Do not suspect evil nor carry out what would develop such sentiments by scrounging for the faults of others. If one’s malice is after suspecting your siblings’ inferiority by whatever material judgement one has forged, then know that one’s absolute value in the Sight of the King of Kings is by a criterion you cannot perceive. It is by the supreme distinction of Taqwa: a covert, classified, and maybe surprising secret known only to the Knower of the Unseen. Iman is thus both inner and outer and involves a substantiation process through effort and sacrifice. Look at the oldest companions, the Muhājirūn and Ansār, who surrendered all that they possessed for Allāh and His Messenger whilst returning that favour to Allāh, not to their own selves. They gave up a reviled circumstance of loss and a restrictive and fatiguing disconnection from their Creator, and they gave up a derisory social order to the sweetest and most satisfying state of Iman and connection with their Creator and noblest social order. They are the beneficiaries, but are nonetheless promised Paradise. The favour is thus entirely to Allāh and His Messenger (sall Allāhu ʿalayhi wa sallam).

We ask Allāh to accept this small and wholly deficient journey through al-Ḥujurāt and to forgive us for our infinite shortfalls. We wrote by His favour and Tawfiq. He inspires His servants to say what he has already clarified and we introduce mistakes of our own. When remembering that we are wholly at the mercy of His strength and utterly in need of His way, we can only ask to be rewarded humbly and insolvently. Yet He is al-Rahmān, al-Rahīm, worthy of praise and thanks for being so, and thus we say forever, with its meaning in mind: