Quranic Community #9 | Do you believe everything you are told? 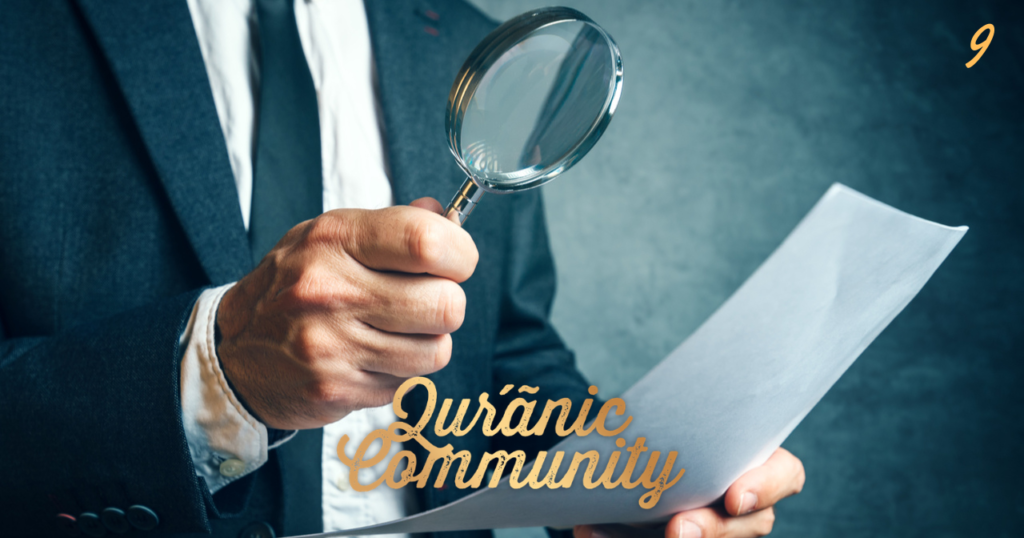 Al-Ḥujurāt’s first section of five verses outlined the manners with Allāh and His Messenger, and the specific and exclusive behaviour a Muslim must exhibit towards the Final Messenger (sall Allāhu ʿalayhi wa sallam), who was sent to complete the Divine Message and perfect the best manners. We recognised that no opinion or action should precede his. No voice should outdo his, nether in his presence, in the vicinity of his purified grave, over his reported directives or general Sunnah, nor in the sittings of his inheritors who are the scholars of Islam.

As the Messenger (sall Allāhu ʿalayhi wa sallam) was a mercy to mankind, he correspondingly built a community upon the finest ethics. Putting Allāh and His Prophet first appropriately structures the Ummah, such that it is respectively protected from vice, conflict, and disunity. Whoever overlooks Allāh and the Prophet’s prerogative of being first is none but a ‘deviator’ or ‘Fāsiq’.

It naturally follows that giving precedence to that Fāsiq instead brings about the opposite; sin, strife, and disunity. Such conflict ultimately impacts the followers of the Messenger (sall Allāhu ʿalayhi wa sallam), for “your suffering is distressing to him.”[1] In this way, even this passage is about not enacting harm upon the Prophet of Allāh (sall Allāhu ʿalayhi wa sallam) in any way.[2]

“You who have Iman! if a deviator brings you a report, scrutinise it carefully in case you attack people in ignorance and so come to greatly regret what you have done. Know that the Messenger of Allāh is among you. If he were to obey you in many things, you would suffer for it. However, Allāh has given you love of Iman and made it pleasing to your hearts, and has made Kufr, deviance and disobedience hateful to you. People such as these are rightly guided. It is a great favour from Allāh and a blessing. Allāh is All-Knowing, All-Wise.”[3]

“You who have Iman! if a deviator brings you a report, scrutinise it carefully in case you attack people in ignorance and so come to greatly regret what you have done.”[4]

You who have believed in the truthfulness of Allāh and His Messenger, if a deviator brings you a report about a group of people then scrutinise it. Other authentic Qur’ānic recitations (Qirā’āt) mention ‘fatathabbatū’ rather than ‘fatabayyanū’. In both cases, the meaning is to wait until you can establish the veracity of the report you have received and not rush to accept it. Strive to establish its veracity just in case you end up inflicting anything on an innocent people which would have occurred out of your ignorance, and by doing so, regretting both your accusation and the action you took as a result.[5] The categorical mention of regret is because this is what is anticipated of a believer after having mistakenly fallen into sin. Regretting a sin is the very first part of repentance.[6]

This is the third call, introducing the mannerisms that groups of Muslims should exhibit towards one another. Notice that it was not preceded with a conjunction (harf ‘atf) like ‘and’, so as to say “and you who have Iman!” but afresh, as in “you who have Iman!” This is to give individual emphasis and importance to this statement. It is a new and individually-titled section of injunctions. A ‘Fāsiq’ is a person who has ‘Fusūq’, which is to do what Islam ranks as major sins (kabā’ir). Some have said that Fāsiq in this instance means a liar (Kāthib).[7] We will shed more light on this later.

The use of the conditional device ‘if’ (in) is as if to say, ‘on the off chance that this were to happen’. The use of ‘in’ instead of ‘ithā’ (when) implies that such an occurrence is rare or exceptional, or should be such. “In case you attack people in ignorance” becomes the repercussion of inventing news and an indirect threat to those planning to do so. Coming “to greatly regret what you have done” is, from a religious perspective, implying that the sin of attacking or blaming a people on the basis of false news is not only on the originator of that news but on those who acted upon it.[8]

We mentioned how repeating “you who have believed” creates individual suspense and attention to what is essential in and of itself. Repetition of address throughout the Qur’ān has the same effect. In Surah Luqmān, the wise man’s advisory discourse to his son is a fascinating demonstration of this. Focus on his advice preceded by “my son” against those connected by the conjunction ‘and’:

“‘My son, do not associate anything with Allāh. Associating others with Him is a terrible wrong…[9] My son, even if something weighs as little as a mustard-seed and is inside a rock or anywhere else in the heavens or earth, Allāh will bring it out…[10] My son, establish Salah…”[11]

In the next verse he says:

“And do not avert your face from people out of haughtiness and do not strut about arrogantly on the earth. Allāh does not love anyone who is vain or boastful.”[12]

Every time the matter was related to Islam’s fundamental creed (‘aqīdah), something enormous such as Allāh’s Oneness (Tawhīd) or establishing Salah, he repeated his address ‘yā bunay’. But for those matters related to interacting with Allāh’s creatures, he used the conjunction ‘and’.[13]

Who is a Fāsiq? Some scholars have said that a Fāsiq is a person who indulges in major sins or insists on lesser sins so much that they totally outweigh his good deeds. In Islam, ‘major sins’ are generally considered as those that have an associated penal punishment in the Qur’ān or authentic Sunnah. This would evidently include adultery, fornication, alcoholism, theft, unsubstantiated or uncorroborated accusations of fornication, and the like. Lesser sins encompass most other sins we accumulate in our daily lives. The accusation of Fisq is not an easy one to throw around at those who commit lesser mistakes. A Fāsiq is usually easily identified from his or her outer insistence on unambiguous abominations.

Linguistically, the Arabs say ‘fasaqat al-rutabah’ when the inner pulp of a date separates from its skin. As the pulp loses its surrounding and protection, it is exposed to all types of pests and decay. Analogously, a Muslim is surrounded by the shield of Iman. When a person slips out of this fortification, he or she becomes exposed and acclimatised to sin, becoming a Fāsiq. Correspondingly, that person becomes even more vulnerable to all types of pests and corrupters.[14]

Both the words Fāsiq and Naba’ (news) are in the indefinite form. Fāsiq is not al-Fāsiq, and Naba’ is not al-Naba’, and neither are particularised. This implies that if any Fāsiq that can be described by that title, due to them being known for any type of Fisq, comes with any piece of news, then scrutinise it. The type of Fisq does not need to be of a particular sort, or related to their trustworthiness. Even if a person’s Fisq is their open promiscuity or insistent on financial wrongdoing, that person falls under this category and their trustworthiness should be scrutinised.[15] Even if one’s Fisq is not related to their honesty but to another vice, it may indicate weakness of one’s inner religious compass and a readiness to harm others or society at large.

Who and how do we scrutinise?

How should the verse of scrutinising reports affect how we receive accounts in general? According to b. ʿĀshūr, three legal principles can be derived from the verse:

1. It requires that one enquires about the trustworthiness of the unknown person before accepting their witness or account because they may be a Fāsiq. Note here that this does not mean one is assuming they are Fāsiq, rather their innocence is maintained.

But it is to prevent taking action against others on the back of news from someone whose righteousness has not yet been established. The scholars are in agreement that if a person cannot be known, either inwardly or outwardly, their statements are not to be accepted, and that their trustworthiness should be determined first.

2. It is sufficient for a single trustworthy and righteous person to come with a report, statement, or witness for it to be accepted, except in cases where Islam explicitly demands more than one witness.

3. The ‘regret’ mentioned in the verse indicates that if a person fails to adequately scrutinise a report and takes inappropriate action, he or she is also blameworthy. This applies to a leader, judge, or any ordinary individual.[16]

Kathīr adds that many scholars used this verse as a basis of rejecting the narrations of dubious or unknown narrators just in case they happen to be deviators. Others accepted them, reasoning that the need to ‘verify’ is only necessary after you establish that such a person is a deviator.

Thus, included in the address ‘you who believe’ is no doubt: a) the Prophet (sall Allāhu ʿalayhi wa sallam); b) the scholars of Islam, in order to establish the principle of transferring knowledge and authority; c) the leadership, so as to only rely on trustworthy accounts; and d) every individual who hears this verse until the end of time.

This scrutiny is one of the founding principles of a proper judicial system and the cornerstones of justice.