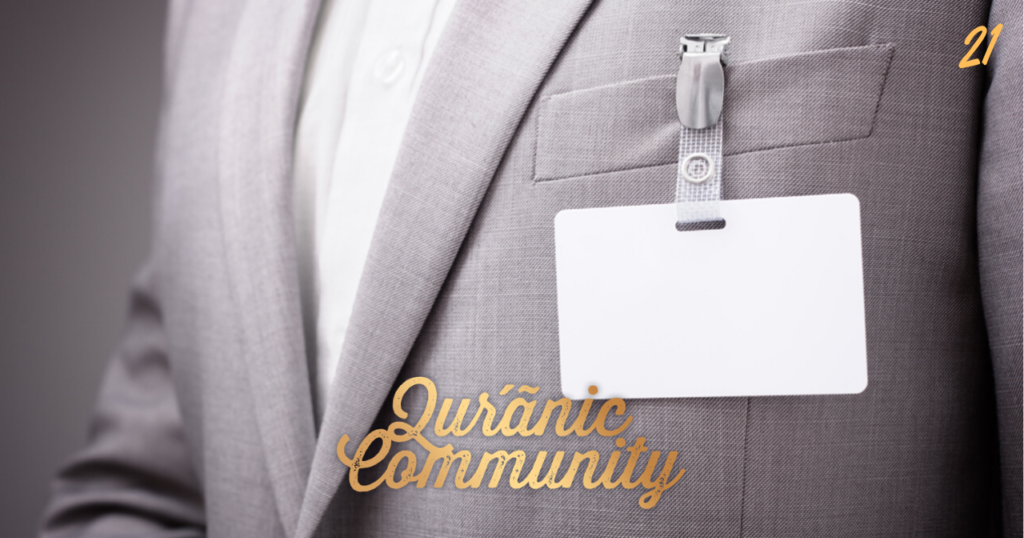 A person seldom struggles and sacrifices for something he or she does not believe in wholeheartedly. On the contrary, those who work hard, struggle, and fight for the sake of their Islam have truly proven to have overcome their own inclinations. This is because that person will have put their very Nafs that commands one towards desires and inclinations at stake! Those who harbour doubts in their Iman will simply not struggle against others to defend or spread that frail belief. The Sādiqūn (truthful ones) are those who have validated their verbal claims with action. It comes as no surprise that giving charity is called Sadaqah, for it is a tangible validator of Iman – to give up what you love. Correspondingly, in the Qur’ān, the most consistent and defining characteristic of the hypocrites is their tight-fistedness!

“The ‘Mu’minūn’ are only those who have had Iman in Allāh and His Messenger and then have had no doubt and have done Jihad with their wealth and themselves in the Way of Allāh. They are the ones who are true to their word.”[1]

The Mu’minūn are those who have believed in Allāh and His Messenger, held no doubts in their belief, then strove (Jāhadū) with their wealth and lives for the sake of Allāh. They are the ones sincere in their claim to Iman, having verified their words with actions.[2] The first word, ‘innamā’, restricts the meaning to only that (i.e. al-Hasr), meaning that believers are ‘none but’ those who have truly believed in Allāh and His Messenger without harbouring doubts, and those who have strove.[3] The subtle indication is that the Bedouins who claimed Iman may have continued to harbour doubts and, as such, the Iman in their hearts was still fragile and rickety. This is not to say that they were intentionally lying, as in that case they would have been called out as hypocrites![4]

The believers are those who impose on themselves Allāh and His Messenger’s obedience without doubting the binding nature of their commands. They are those who ‘Jāhadū’, encompassing, where applicable the action of fighting the Mushrikīn with both their wealth and their selves such that Allāh’s word is raised above every other. [5]

Say, O Muhammad to these Bedouins: are you teaching Allāh about your religion (i.e. about your obedience) when Allāh knows everything in the seven heavens and earths?[7] Notice that ‘are you teaching’ has been used as opposed to ‘are you informing’ (atukhbirūn). Teaching involves more pronounced and emphasised behaviour, coupled with evidencing and an intention of continuing until you are able to convince the listener of your argument. It is as if to say, ‘are you insisting on convincing the Prophet of something Allāh surely knows to be false?’[8] This is because nothing is hidden from Him, so how could the condition of your Iman be hidden from Him? “Allāh has knowledge of all things”, which is more expansive than ‘everything in the seven heavens and earths’, so be cautious of saying with your tongues the opposite of what is in your hearts.

“They think they have done you a favour by becoming Muslims! Say: ‘Do not consider your Islam a favour to me. No indeed! It is Allāh who has favoured you by guiding you to Iman if you are telling the truth.’”[9]

To add to the falseness of their claim, they see it a favour on you that they have become Muslims. ‘Mann’ (from yamunnūna) is when you articulate your favours and acts of goodness to a receiver, anticipating a reward from the recipient either directly or indirectly. Directly is to state your favour and your anticipation of remuneration explicitly. In the case of Banu Asad, they said: “We did not fight you as did so and so.” Indirectly is to hide that Mann by conveying it as if merely conveying information. Again, in the case of Banu Asad, they said: “We came to you with our children and belongings,”[10] which, although a reality, is an obvious request for requital. Tell them, O Muhammad, “do not consider your Islam a favour to me” for it is Allāh who has favoured you and gifted you by guiding you to Iman in Allāh and His Messenger, if you are really telling the truth about having become Mu’minūn.[11]

“Allāh knows the unseen things of the heavens and the earth. Allāh sees what you do.”[12]

He knows the truthful one among you from the liar. He knows those who have become Muslim desiring the Face of Allāh and those who have done so fearing His Messenger (sall Allāhu ʿalayhi wa sallam).[13]

This reference to the heavens and earth differs from that in verse 16. Verse 16 may imply in the minds of some that Allāh’s knowledge is limited to that which is known by us or available to us as accessible knowledge. Verse 18 affirms that Allāh’s knowledge extends to the unseen, using the tool of emphasis ‘inna’ (‘surely’ or ‘most certainly’) in order to address the doubt towards this reality expressed by the actions of the Bedouins.[14]

Do not teach Allāh the secrets of your hearts, for there are secrets in the heavens and earth that Allāh knows but has hidden from you. “Allāh sees what you do”, so do not suppose that Allāh’s knowledge of secret and hidden matters means He does not see what is open and revealed. He sees both your secret and open matters, and will reward or punish accordingly.[15] Reflect on the relevance of this to the verse of Taqwa and how often our actions imply that we are teaching Allāh about who has Taqwa and who does not.

These verses speak of the Bedouins who entered Islam without enough foresight to the fact that embracing it has requisites. In other words, they became ‘Muslim by name’, as we would call them. Despite this reality, they used the rhetoric of ‘Iman’ (“Āmannā”), which would imply that they fulfilled its requirements! Allāh therefore wanted to contest their claim by telling them, “Rather, say, ‘we have become Muslim’,” meaning that they have merely entered the fold of Islam. The full beauty of Iman is yet to enter their hearts. Being a ‘Mu’min’ has its weight and duty. Besides the recognition of Iman as a truth, it must be accompanied by a struggle for Allāh that serves to physically testify to that person’s Iman.

Allāh alone ultimately knows if a person’s claims are actually true because only Allāh knows what is in the hearts. Claiming Iman or denying it from others who have claimed it is thus an attempt to teach Allāh about what is in people’s hearts. This is of the worst manners a person can have towards His Creator and an evident example of putting oneself ahead of Allāh. From that angle, we notice how the end of the Surah relates back to its beginning, covering manners with Allāh (“do not put yourselves in front of Allāh) to close its circle of meaning in the most spectacular way.[16]

On the contrary, if you are not attempting to teach Allāh of covert matters, then the alternative is that you are doing ‘Mann’ to His Messenger. You are ‘reminding him of what you think is your favour’, or ‘putting him under the obligation of showing you gratitude’. It is as if the Bedouins said: “We have given up a lot for you.” In reality, you have done no favour to the Messenger of Allāh. Instead, Allāh has done a favour to you that you should be grateful for. He guided you to Iman after having created you, provided for you, and blessed you inwardly and outwardly.[17] He has protected you from your own harm. Recall the injunctions of al-Ḥujurāt: your reputation, privacy, honour, selves, and so on are protected through Islam. He has protected others from your harm and, on top of that, promised you Jannah![18]

The heavens and the earth are astonishing in and of themselves, yet Allāh says “what is in the heavens and the earth.” Since the contents of an envelope are more valuable than the envelope itself, the subtle indication in this expression is that whilst we are impressed by the extraordinary and vast heavens and earth, what is within is even more incredible. Thus, there exist amazing secrets enveloped within amazing things that are revealed, enveloped within the expansive heavens and the earth. All aspects are astonishing and ‘adhīm, eminent and magnificent in and of themselves. The dimension of the Ghayb is unlimitedly expansive. By the dictates of the Qur’ān’s reference to it, it must be perpetually existent. We will continuously ‘discover’ as parts of the ghayb transition from the hidden to the revealed dimension.[19] The recognisably extraordinary and never-ending characteristics of the ghayb is a sign that He is the Truth:

“We will show them Our Signs on the horizon and within themselves until it is clear to them that it is the truth. Is it not enough for your Lord that He is a witness of everything?”[20]

The Difference between Iman and Islam

In the previous verses, we see references to both Iman and Islam. What is the difference between the two? In general, Iman is more specific than Islam. This is evidenced in the Hadith of Jibrīl (ʿalayhi al-Salām) when he asked about Islam, then about Iman, then about Ihsān (perfection), transitioning from the general to the specific, to that which is even more specific:

We learn from this Hadith that ‘Islam’ involves the actions of the tongue and those of the limbs, i.e. the ‘Five Pillars of Islam’. Iman, on the other hand, involves internalising the belief system wholeheartedly and in a way that drives those actions, but with greater and conscious internal conviction. Then the innermost sphere of Ihsān is to worship Allāh as if you see Him, which is ultimate distinction and the highest level possible of a Muslim. Just below this, within the outer sphere of Ihsān, is to worship Allāh with the honest conviction that He can see you begetting the associated affects such a conviction will have on the quality of your worship.

The meanings of Islam and Iman will generally assume the aforementioned separate meanings when mentioned side by side as in the case of al-Ḥujurāt verses 14-17. Both terms, however, can assume the same meaning if occurring entirely separately. For instance, there is no doubt that when Allāh says “O you who believe (āmanū)” in al-Ḥujurāt and elsewhere, it is a simultaneous address to Muslims by name as it is to those who are Mu’minūn or even Muhsinūn!

May Allāh grant us the sweetness of Iman.