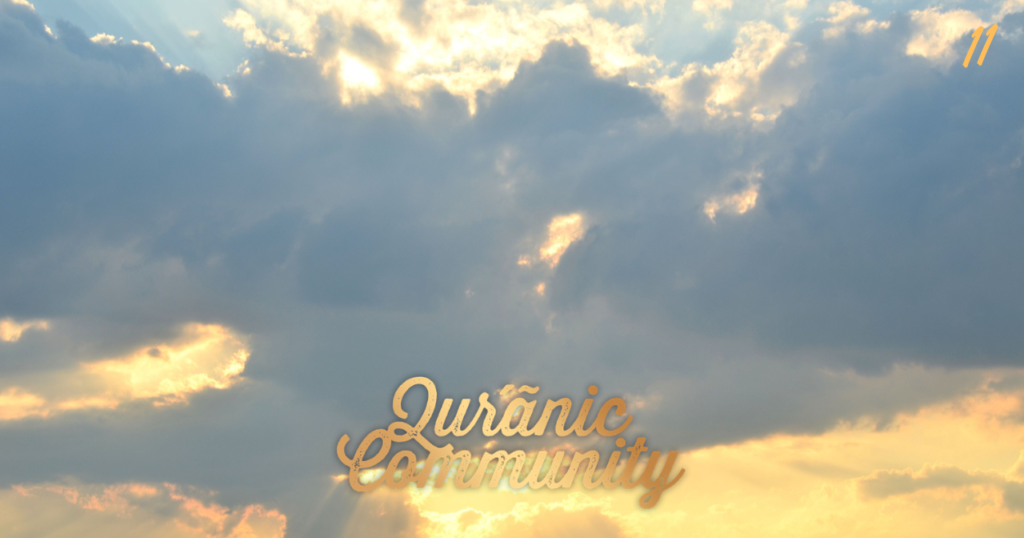 From the outset of Surah al-Ḥujurāt, we are reminded that Allāh sent us a Messenger, defined our social structures and lines of conditional and unconditional obedience, elucidated the path to truth (rushd), warned us of its impairers, addressed their behaviour, then made this path beloved to the People of Iman. He gave us what we need, made it beloved to our hearts, and then rewarded us for it.

“It is a great favour from Allāh and a blessing. Allāh is All-Knowing, All-Wise.”[1]

Where did all of these great blessings and privileges emerge from? “It is a great favour from Allāh and a blessing” The One Who possesses full and perfect knowledge. The One, the Almighty, Most Wise, who absolutely and fully Knows who deserves to receive the boundless gift of that guidance from those who deserve otherwise. He is Wise in His words, actions, legislation, and decree.[2]

What is the difference between Fadl and ‘Adl? ‘Adl is equity or justice, a magnanimous divine concept and characteristic that successful societies uphold. It is to give ‘tit for tat’; or to receive exactly what you deserve. Allāh will punish by his ‘Adl. To renounce the cause of one’s existence, Allāh, is to be neglected and eternally be put in Hell. This is ‘Adl. But when Allāh bestows, gives, rewards righteousness and overlooks sin, it is through his Fadl. If we were to be dealt with equitably, we would deservedly be ruined not for just the nature of our misdeeds, but for the exaltedness of Whom we choose to disobey:

“And if Allāh were to impose blame on the people for what they have earned, He would not leave upon the earth any creature.”[3]

Ponder on Islam and its legislations. Nothing that Allāh obligated upon us benefits Him in the slightest. He is the Almighty, the All-Wise, and the All-Powerful and was such before everything in existence and He will continue to be thus after we die. Our obedience does not increase Him in any of this. What He obligated is equivalently an obligation on the rest of society. For instance, whilst Allāh commands you not to steal nor to gaze at the inviolabilities of others as an individual, He likewise commanded millions of others to not steal from you nor to look at your inviolabilities. Therefore, the primary beneficiary from Haram is you yourself.

Since you are the direct beneficiary of what is Halal and what is Haram, you are effectively already receiving your wage. After such ‘benefits’, the logical expectation is no further renumeration. But it goes that Allāh, through His legislation, gave and then rewarded on top of what He gave. It is entirely out of Allāh’s Fadl (rather than ‘Adl) that He rewarded us for our obedience rather than His ‘Adl. For if it were by His ‘Adl, we would solely deserve the benefit brought about by the legislation, and nothing further.[5]

When the messengers called their people to Allāh’s worship, their people generally rejected their call. However, almost all the prophets we have been informed about told their people: “I do not ask you for any payment. My payment is only from the Lord of the worlds.”[6] This is despite knowing well that their people were less than willing to pay for something they rejected when offered to them free of charge! But it is as if the prophets were telling them, ‘Since I am calling you to what is entirely your benefit, I would have otherwise, instinctively deserved to be paid for it, but the magnitude of that benefit I am bringing you is so great that none, save Allāh, can afford to pay for it.’

The Indispensability of News and its Abuse

One must briefly reflect on why what is today considered a mundane pastime – the conveyance of ‘news’ – has been surrounded by some of Islam’s heftiest concepts and realisations. Maybe today’s inordinate accessibility to news and participation in conveying it has caused many to belittle its own significance and bearing.

News in and of itself is indispensable. The link between this earth and the heavens was established through the intermediary of ‘news’. No human has seen what is beyond the visible cosmos. We were informed, and we trusted those who informed us. Contrary to what atheists will pontificate, news can establish irrefutable truths. There is plenty that believers and even atheists regard as irrefutable truths, living by them and committing their lives to them purely through news they received from trustworthy sources who themselves have ‘seen’. The difference is that believers acknowledge revelation (‘news’) as one of the devices of knowledge, whilst injudicious atheists will deny this, despite themselves never observing many of the truths they themselves believe in.[7]

Messengers convey information about Allāh and about His Will:

“Tell My slaves (convey the naba’ or news to them) that I am the Ever-Forgiving, the Most Merciful.”[8]

The Qur’an contains news of Allāh and His sublime names and attributes, news of the previous nations and those that follow, news of the creation of the heavens and the earth, the angels, the Prophets and Messengers, the Day of Resurrection, Paradise, and the Hellfire. Several tools exist for establishing veracity, but trust is recognised as the most powerful without competition. Trust eclipses one’s own visual observation that could easily be tainted by perception or deception. Not a single human being questioned the immaculate integrity of the Messenger of Allāh (sall Allāhu ʿalayhi wa sallam) prior to his prophethood. Besides the linguistic, scientific, and physical miracles that fortified his message, his own unblemished trustworthiness is the utmost testimony to Islam.

Our eyes recognise that he came with something superior in its essence, but our logic holds that a man who never dared to tell a lie about a mundane matter would never tell a lie about Allāh. What, then, of a lie that would bring about his immense suffering and personal sacrifice? He was besieged, exiled and fought, all the while returning the credit of all he delivered to other than himself.

As humans, we instinctually enjoy one another’s news. Allāh created us with the tendency to live as tight clusters. Our strength as humans is through our collectives. Today, the proliferation of news is unlike it ever used to be. It has become a booming business, meticulously designed to catch your attention and concern. It is manufactured to correspond with precisely what you want to hear and disseminate. A report emerging from any corner of the earth can change the other. News is today’s uncrowned king, terrifying people on every level.

Its extent, combined with the human traits to proliferate without scrutiny, has deformed truths beyond recognition. In his Muqaddimah, b. Khaldun reasons that scrutinising news is rare and exhausting, and that ignorance comes hand in hand with conveying it, combined with blindly imitating others (Taqlīd).

Upon today’s news, people will interpret their past and define their future. Combined with its impact when consumed and proliferated, much of the news today is manufactured by industries with ulterior and vested interests and spun by oligarchs who profiteer out of the demise of others. Today, even petty people are trusted to give the news. The Prophet (sall Allāhu ʿalayhi wa sallam) said:

Technically, lying is to distort realities knowingly or unknowingly. The former is blameworthy. Moreover, conveying news without verification, even if done ‘innocently’ can easily lead one to intentionally lie to defend their credibility when others discover the falsity of their report.

There are few vices Allāh reproaches in the Qur’ān more than lying. Its atrociousness was recognised by Muslims and non-Muslims alike. Soldiers of ancient Rome could be ‘cudgeled’ (beaten with a stick) to death for falsifying evidence or lying under oath. Being a ‘liar’ is recognisably one of the worst attributes a person can be known for. People, in their disposition, recognise what a lie could have led to were people to believe it. Interestingly, fabricating lies is of the few vices that precludes a person’s label of Iman. Allāh says:

“It is only those who do not believe in the Āyāt of Allāh, who fabricate falsehood, and it is they who are liars.”[10]

Al-Ḥujurāt maintains that a person shares guilt by believing the account of a liar. What then of he who creates the lie to begin with? Our mother ‘Aisha (raḍiy Allāhu ‘anha) used to say that a man would lie in the presence of the Messenger (sall Allāhu ʿalayhi wa sallam) and the Messenger would continue holding a type of resentment towards that person until he heard of that person turning back and repenting.[11]

Besides the individual’s trustworthiness, lying can fuel division, conflict, bloodletting, and the breaking up of families. ‘Uthman (raḍiy Allāhu ‘anhu) was murdered on the back of a lie, and the war between the companions was peddled and fuelled by liars outside of Madinah.

B. Taymiyyah reasons that truthfulness is the foundation of all good deeds, whilst lying is the foundation of all sins. The distinction of man over animals is through the former’s rationale. Rationale then culminates in composed speech, or constatives (khabar), which describe the world around us, for example ‘the sky is blue’. These descriptions can accept affirmation or denial and can thus be distorted. ‘Performatives’ (inshā’) are used to carry out an action[12] and cannot be affirmed or falsified such as to say ‘I apologise’. Constatives can only be established through truthfulness and honesty and are also distorted by the opposite. Constatives are furthermore the root of performatives, and form the backbone of knowledge, whilst performatives form the backbone of action.

Using this description, b. Taymiyyah argues that since the ability to form constatives is what differentiates man from animal, and gives the former rationale, a liar’s behaviour becomes worse than an animal. Additionally, the distinguishing characteristic between a Mu’min and a Munāfiq is truthfulness.[13] Truthfulness of intention is likewise what distinguishes a sincere person from a show-off, and showing off is a symptom of hypocrisy. And Allāh knows best.

The drive to sin usually happens during moments of distorted reality. This is because Hell is still there, Paradise is still there, Allāh and His angels are still watching, but something in one’s self causes him or her to belie the extent of that knowledge, leading to him or her to sin. The Prophet (sall Allāhu ʿalayhi wa sallam) said:

“Avoid (you people) falsehood, for falsehood leads to wickedness and wickedness leads to Hell, and if a man continues to speak falsehood and makes falsehood his object, he will be recorded as a liar before Allāh.”[14]

And Allāh is source of success.

[12] With performatives, the speaker does not describe the world, but changes it to say “I apologise for my behaviour.” This form of speech is based on realities established by constatives.