Quranic Community #19 | The Final Call to All of Mankind 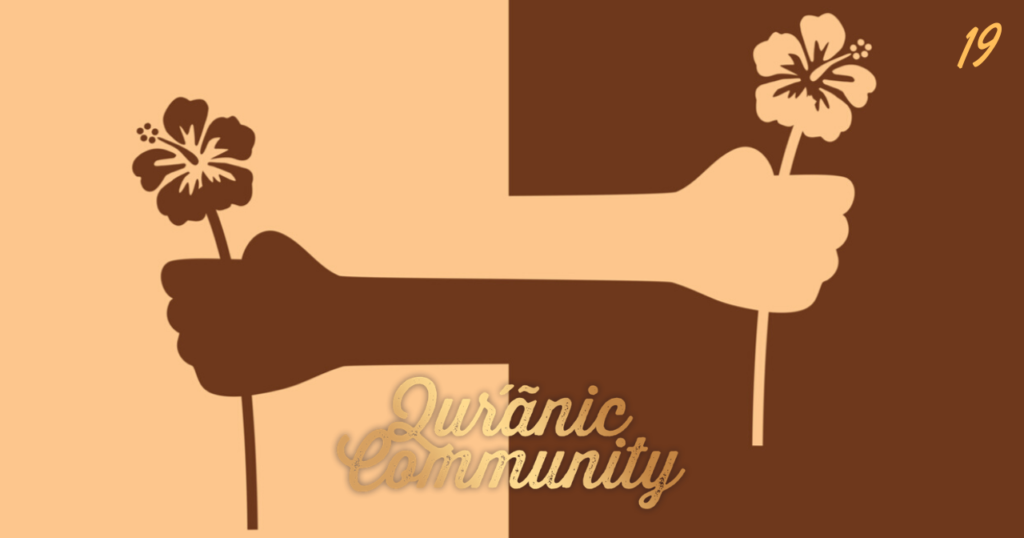 Now comes the final call. Unlike the preceding five calls, this one is not only addressed to believers, but to all of humanity. It will set the benchmark and criterion for superiority until the end of time. It is one that is identified as the ultimate divine proclamation against tribalism, nationalism, and xenophobia – behaviours that underlined the era of pre-Islamic ignorance (Jāhiliyyah). It is the premise for unity and coexistence. At the dawn of the ninth year of the Hijrah, many were entering Islam and some were being scorned and ridiculed for their low social statuses or lineages, while others were slaves from unknown ancestry or the sons and daughters of slaves! This verse was revealed in light of this context.

In the Qur’ān, whenever the ‘believers’ are addressed, an instruction follows. The addressee is then inspired to observe by virtue of their Iman. Conversely, when ‘people’ are addressed, what usually follows are universal truths, including matters of ‘aqīdah and others concerning establishing Iman in people’s hearts. These universal realities naturally encompass everyone, Mu’min and Kāfir:

“Mankind! We created you from a male and female, and made you into peoples and tribes so that you might come to know each other. The noblest among you in Allāh’s sight is the one with the most Taqwa. Allāh is All-Knowing, All-Aware.”[1]

Addressing all of mankind, Allāh informs us that He has created us from water emerging from man and woman, or from Adam and Hawā’ (Eve).[2] [3] He made us close and distant relatives of one another, in closely related groups called ‘tribes’ (Qabā’il), and distant ones called ‘nations’ (Shu’ūb). All people are equal so far as the nobility of the clay from which they were created from is concerned.[4] The only reason He made us such is that we recognise our close and distant relatives. It is not for declaring our superiority or determining our closeness to Allāh, for the closest to Allāh and the noblest – if you insist on competing for ancestral nobility – are those who have the most Taqwa. ‘Akram’ means the noblest and the most valuable, and saying “in Allah’s sight” (‘’ind Allāh’) emphasises that no other criterion bears weight or value with Allāh.

“Allāh is All-Knowing, All-Aware.” Allāh knows well who of you has the most Taqwa and who is correspondingly the noblest in His sight, because He is fully acquainted with your affairs and needs. Nothing of this is hidden from Him.[5] Looking at the attributes Allāh uses to conclude the verse in another way, Allāh knows well what true nobility is. This is besides the petty things you have instead defined as giving nobility, be it wealth or power. He is well acquainted and aware with how much Taqwa and thus how much nobility each person truly possesses.[6]

Notice how the verse of determining nobility comes immediately after those concerning Ghībah and holding your siblings in contempt. Both of these are attempts at sequestering one another’s nobility. People are equal in their humanity and the only basis for superiority is Taqwa. The nature of Taqwa is that it is hidden and thus not possible for one to claim for themselves, let alone assume it missing from someone else! Ponder over the verse when Allāh says:

“He has the most knowledge of you when He first produced you from the earth, and when you were embryos in your mothers’ wombs. So do not claim purity for yourselves. He knows best those who have Taqwa.”[7]

He created us all, peasant and king, student and professor, poor and rich, from the same earth we trample on and from the same soil we clean off our clothes. Then we became feeble embryos sitting in our mothers’ wombs, relying on their food, blood, and oxygen. As such, do not distinguish yourselves on the basis of the origin of your creation, as there is nothing exquisite about it. Rather, He knows best those who have Taqwa.

There is no real basis upon which one can look down on others, find fault with them, ridicule or label them. The distinction of our nations and tribes is not to determine superiority but is for us to recognise each other and nothing else. It is as if Allāh is telling us that we have turned this recognised disposition (Fitrah) back to front, making the very distinction intended for recognition (Ta’āruf) instead a cause of oblivion (Inkār) and enmity.[8]

The Distinction of ‘Taqwa’ from the Sunnah

“Certainly, Allāh does not look to your faces and your wealth but He looks to your heart and to your deeds.”[10]

In his sermon delivered on the Farewell Pilgrimage, the Prophet (sall Allāhu ʿalayhi wa sallam) said:

This was during Hajj, an event that exemplifies this advice in both meaning and practice. Of every other issue the Prophet could have chosen as his parting advice, he chose this, beyond which the revelation will cease forever.

The Honour of a Muslim from the Sunnah

‘Abdullah b. ‘Umar narrates that he saw the Prophet (sall Allāhu ʿalayhi wa sallam) making Tawāf around the Ka’bah whilst saying:

“Verily your blood, your property, and your honour are as sacred and inviolable as the sanctity of this day of yours, in this month of yours, and in this town of yours.”[15]

“During the Mi’rāj (the Night of Ascension), I saw a group of people who were scratching their chests and faces with their copper nails. I asked, ‘Who are these people, O Jibril?’ Jibril replied, ‘These are the people who ate flesh of others (by backbiting) and trampled people’s honour.’”[17]

Reports suggest that the verse prohibiting ridicule was revealed on account of some of the Prophet’s wives making fun of Um Salamah’s short stature, or of others calling Safiyyah, the daughter of Huyai (from Khaibar), a ‘Jewish lady’. Both stemmed from the natural jealousy that would sometimes take over our mothers’ actions and words, not least that Safiyyah (rady Allāhu ‘anha) was from noble ancestry.[18]

Other said that at least part of verse 11 was revealed concerning a Madani tribe by the name of Banu Salamah. When they had accepted Islam upon the arrival of the Messenger of Allāh (sall Allāhu ʿalayhi wa sallam), each of them was known by two or three nicknames, some of which they had inherited from the days of pre-Islamic ignorance. Many disliked to be called by these former nicknames.[19]

Other exegetes[20] mention in their Tafsīr that the companion Thabit b. Qais used to suffer from a weak sense of hearing so he would sit at the very front of the Masjid to hear the Prophet (sall Allāhu ʿalayhi wa sallam). Once, Thabit entered the crowded Masjid desiring to sit at the front. As he shuffled through the rows, a man told him to sit where he was and refused to move out of the way. Frustrated, Thabit sat behind the man. After some time, Thabit asked the man, “Who are you?” The man replied, “I am so and so.” Thabit responded, “The son of so and so woman?” referring to him by the derogatory name people would give that man before his Islam. The man lowered his head ashamed.

Al-Qurtubi[21] adds that the Prophet (sall Allāhu ʿalayhi wa sallam) asked, “Who mentioned so and so woman?” Thabit replied, “Me, Messenger of Allāh.” The Prophet said, “Look at the faces around you.” Thabit looked and the Messenger asked, “What did you see?” He said, “I see the white, the black and the red.” The Prophet said, “You cannot be distinguished over them except by way of Taqwa.” As such, the verse was revealed concerning this incident.

Concerning the verse of Taqwa, verse 13, it was reported that the Prophet (sall Allāhu ʿalayhi wa sallam) ordered a tribe by the name of Banu Bayādah from the Ansār to marry a man by the name of Abu Hind, who was one of their servants to one of their women. They objected and said, “How can we marry our daughters to our servants?” Allāh then revealed the verse.

Others report that during the conquest of Makkah, the Prophet (sall Allāhu ʿalayhi wa sallam) instructed Bilal (rady Allāhu ‘anhu) to climb the Ka’bah and recite the Adhān. Some people who had newly embraced Islam jeered that a black man who had the social status of a slave was now standing in the heart of Makkah, on top of the most sanctified house. It is said that when news of their mockery reached the Prophet, Allāh revealed the verse.

[12] Saḥīḥ due to its supporting narrations – al-Albani in Saḥīḥ al-Targhīb, on the authority of Abdullah ibn ‘Umar (rady Allāhu ‘anhu)