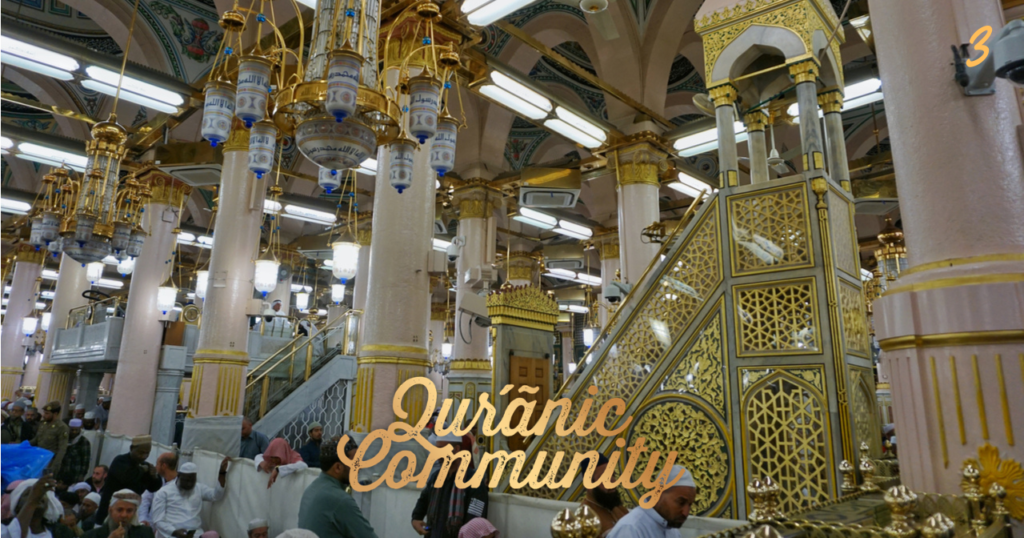 Upon embarking on this transformative journey of al-Ḥujurāt, let us begin with revising our purpose for this undertaking: striving to attain sincere intention to seeking Allāh’s face, becoming better slaves to Him, and removing our ignorance and the ignorance of others.

The previous article mentioned the format of this series, which will consist of a multidimensional study with relation to the wider context of the meanings of the Surah, how they relate to one another, the implied messages, application, and reflections. This is all done to achieve our objective of striving to be sincere with our intentions. With the tools of Tafsir and Tadabbur, we can elucidate and apply the central theme that this Surah is centred around: nurturing the behaviour of the Muslim Ummah. Part Three will explore the intricateness and elaborateness of the style, structure, and content of the Surah. It will also highlight how the name and structural features of the Surah are all assimilated and connected with each other.

For the sake of structuring this text and facilitating both learning and delivery for those who wish to teach it, we will go by a suggestive sectioning of the Surah into the following five parts:[1]

Seemingly, the Surah is only known by the name ‘al-Ḥujurāt’. Unlike many other chapters in the Qur’ān, the vast majority – if not all – of the scholars of Tafsir (Mufassirūn) refer to it by this name. Ibn ʿĀshūr and others report a consensus on this.

The term ‘Ḥujurāt’ specifically refers to the apartments of the Prophet’s wives. There were nine of them in total, built around the Prophet’s Masjid and separated with palm leaf stalks. Most were situated on the eastern side of the (now green carpeted) Rawdah. Because Makkah is south of Madinah, the Ḥujrah (singular) of ‘Aisha (raḍiy Allāhu ʿanha), in which our beloved Messenger (sall Allāhu ʿalayhi wa sallam) is buried, is positioned to the worshipper’s left when facing the Qiblah. Each Ḥujrah was about the size of a small room, with a ceiling around 2.5m high and with a door that lead directly into the Masjid of the Prophet (sall Allāhu ʿalayhi wa sallam).

Connecting the Name with the Theme

The fact the Surah has only this name indicates that it is Tawqīfi, meaning one that is restricted and regulated, thus accepting no change. In all likelihood, it reflects Prophetic stipulation, as the consensus of companions usually indicates. With this in mind, the name deserves a pause and some reflection.

Why is a Surah that primarily addresses mannerisms named ‘the Prophet’s apartments’? This discussion does not escape the best efforts of deduction as it is by no means exhaustive or absolute. However, returning to the root of the word and referencing its occurrence in the actual Surah may give us a good indication of the association. Allāh says:

“As for those who call out to you from outside your private quarters, most of them do not use their intellect.”[2]

We can already appreciate the main message of this Surah: perfecting character with Allāh, His Messenger, and with one another. A prerequisite to the perfection of that character, however, is to appreciate the position of Allāh and His Messenger. This also includes exhibiting sound Iman and Taqwa. Those who called out the Messenger (sall Allāhu ʿalayhi wa sallam) were group of Bedouins (covered in detail later) named Banu Tamīm who gathered around the Ḥujurāt of the Prophet (sall Allāhu ʿalayhi wa sallam), raising their voices and making statements that were not befitting of his veneration. They were ‘out of character’.

To tie this behaviour with the word, it is necessary to return to its Arabic origin. Though Ḥujurāt refers specifically to the apartments of the wives of the Prophet (sall Allāhu ʿalayhi wa sallam), it comes from the trilateral root Ḥa Ja Ra. This root word means ‘to prevent’ or ‘to seclude’, usually a piece of land using bricks or rock in order to demarcate it or to prevent access.

Thus, it is as if that harshness or careless treatment of the Prophet (sall Allāhu ʿalayhi wa sallam) was a result of their hearts exhibiting the hardness of the same stone used to build the Ḥujurāt, barring their hearts from commanding better treatment. In English, ‘hard-heartedness’ is used to emphasise coldness, brashness, and indifference. In this case, it is to the eminence of the addressee. Allāh says regarding the hearts of some of the Bani Isra’il:

There is more or less agreement that al-Ḥujurāt was revealed in the Madani era. A minority of scholars have suggested that verse 13 (concerning Taqwa) was revealed before the Hijrah. Others have attempted to reconcile this difference by stating that verse 13 was revealed in Makkah but after the conquest of Makkah. Thus, the verse could be Makki by way of where it was revealed, but Madani by its nature.

Expounding slightly on this, every verse revealed after the Hijrah can be considered Madani regardless of where it was physically revealed. Scholars of Tafsir thus reason that the differentiation of Makki and Madani is based on ‘time of revelation’, rather than a particular ‘place of revelation’. More precisely, the Surah was revealed in what is known as ‘Ām al-Wufūd (Year of the Delegates) in the 9th year of the Hijrah, and is therefore one of the last chapters of the Qur’ān to be revealed.

An obvious question poses itself here. People have been Muslim for a long period of time and al-Ḥujurāt, without doubt, covers certain matters pertaining to this reality. But how is it that certain fundamental manners and ethics are being discussed in the very latter part of the Sīrah? Surely many instructions in the Qur’ān had already been revealed and implemented; did the companions need such elementary character building?

To answer this question, one must first explore the ‘Year of the Delegates’. During this phase of the Sīrah, it had been several years since the Muslims managed to repel an Arab-wide coalition against Madinah during the Battle of the Trench (al-Khandaq). Makkah was likewise conquered, and the Muslims had only recently returned from the Expedition of Tabuk in which the Roman ‘superpower’ failed to turn up and put up a fight.

The Arabs surrounding Madinah were naturally in awe of the Prophetic community. It had now established itself as the power bloc of Arabia, fearless in the face of the empires the Arabs had traditionally cowered before. Political ties began to turn in favour of the Muslims.

In response, many tribes began to send delegations to the Prophet (sall Allāhu ʿalayhi wa sallam) renouncing their traditional beliefs and accepting Islam. Droves began entering the religion of Allāh. Many, however, still carried pre-Islamic tendencies and ignorant habits. Some had accepted Islam because of its new political dominance, while others did so for their own ulterior motives. Many were still carrying the baggage of Jāhiliyyah.

Al-Ḥujurāt would specifically establish true Iman in the hearts of this new cohort of Muslims entering Islam in droves, nurturing their character (akhlāq) to fall in line with the teachings of Islam.

The ordering of the Qur’ān is not haphazard. It is divinely inspired and full of wisdom. Let us take a moment to contemplate the placement of al-Ḥujurāt. Towards the end of Surat al-Fatḥ, the 48th chapter placed before al-Ḥujurāt, Allāh says:

“Mohammad is the Messenger of Allāh, and those who are with him are fierce to the disbelievers, merciful to one another. You see them bowing and prostrating, seeking Allāh’s good favour and His pleasure.”[5]

Just before the commencement of al-Ḥujurāt, we find that Allāh praises the Holy Prophet (sall Allāhu ʿalayhi wa sallam) and those with him who supported and propped him and his cause. Accordingly, the beginning of al-Ḥujurāt outlines the sublime manners of the Prophet (sall Allāhu ʿalayhi wa sallam) that will enable the generality of Muslims, or “those who have Iman” (allathīna āmanū) to resemble that category mentioned at the end of al-Fatḥ.[6] In fact, al-Ḥujurāt categorically addresses Islam’s new entrants, almost contrasting their behaviour with the companions outlined at the end of al-Fatḥ and furnishing them with the role-models they should aspire to resemble.

What then is the possible link between al-Ḥujurāt and Chapter 50, ‘Qāf’? Consider the last verse of al-Ḥujurāt:

“Allāh knows the unseen things of the heavens and the earth. Allāh sees what you do.”[7]

Qāf then begins with “Qāf”, one of the Qur’ān’s separated letters (al-Ḥurūf al-Muqaṭa’ah), the definitive and full meanings of which are reserved to Allāh. In other words, their elaborate meanings are of the “unseen things” (Ghayb) that emphasise man’s limited knowledge.

How, then, do the themes of the two chapters of al-Ḥujurāt and Qāf compare? Revisit Qāf and you will identify that its primary focus is on the terrifying episodes of the Day of Reckoning. Allāh says:

“The throes of death come revealing the truth. That is what you were trying to evade!”[8]

“The Trumpet will be blown. That is the Day of the Threat.”[9]

“Every self will come together with a driver and a witness.”[10]

“‘You were heedless of this so We have stripped you of your covering and today your sight is sharp.’”[11]

Therefore, if al-Ḥujurāt is centred on the importance of good manners, or the encouragement and enticement (Targhīb) towards embracing them, Qāf is centred on the severe repercussions (Tarhīb) of their negligence. Qāf underlines that neglectful behaviour towards Allāh, His Messenger, and the believers is a serious matter as there are punishing and horrifying days ahead of us. It is on that day that we will see the fruits of our actions and manners.

Linking the Beginning and End

Noticeably, the last verse of al-Ḥujurāt outlines the All-encompassing knowledge of Allāh:

“Allāh knows the unseen things of the heavens and the earth. Allāh sees what you do.”[13]

Likewise, the first verse begins by mentioning the knowledge of Allāh:

The chapter and its contents are therefore encapsulated within two reminders of Allāh’s knowledge. The latter is of His knowledge of the open and the secret, which is the greatest threat for those in the former who put themselves forward of Allāh and His Messenger, even in their inner dimension.[15] The fact that the Surah is encapsulated in Allāh’s knowledge should come as no surprise as it is full of commandments.

Commandments, without doubt, are taxing. The opposite is also true. Gossip is easy, and even entertaining. Backbiting and socially isolating others is desired. Mistreating others is easier than sacrificing in pursuit of their comfort.

It is hard to honour our seniors, lowering our voices in their presence and preserving the reputation of others in their absence, let alone regulate our inward thoughts and suspicions about others. A person may question why they need to carry such a heavy burden. The answer is because it is borne out of Allāh’s divine knowledge and infallible legislation. Allāh knows, undoubtedly, that these instructions will benefit rather than stifle us. A load that will definitely benefit us is a load worth bearing.

An “O you who have believed” coupled with a ‘do such and such’ contains a call that anticipates a response. The activeness of one’s response is an illustration of that person’s Iman. You are being called based on your Iman. Any hesitation or resentment towards answering is correspondingly an illustration of one’s Iman.

May Allāh increase our Iman.