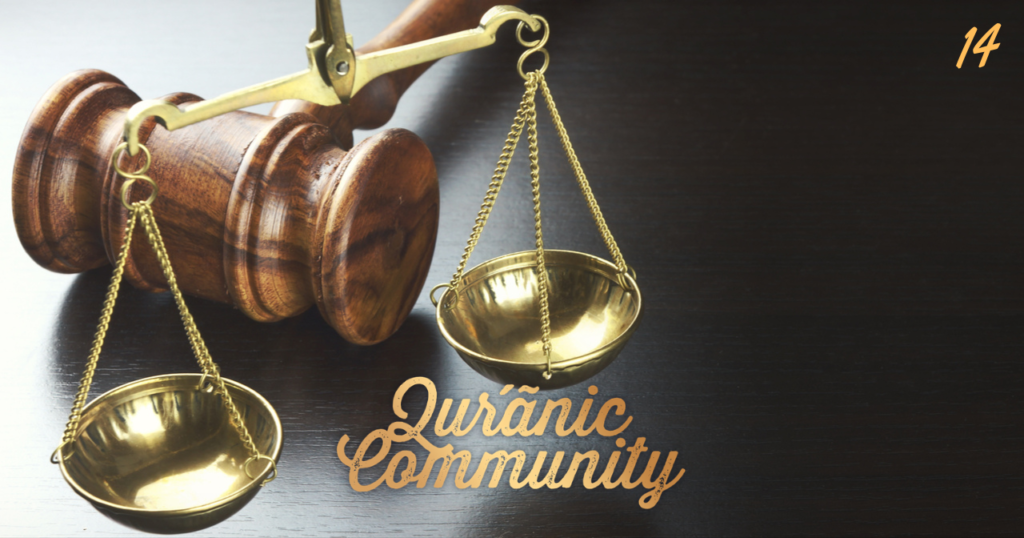 B. Taymiyyah (rahimahu Allāh) once said: “Allāh raises the just nation, even if it is a disbelieving one, and He does not raise the oppressive nation, even if it is a believing one.” Justice is not only a religious imperative but also a universal one upon which Allāh created everything. Justice is a destination to which everything will return and is always, ultimately served and restored. It not only governs the cosmos but also the most subtle components of creation. Oppression is the deformation of that equity and balance.

The Subtle ‘Expectations’ in the Verse

The verses subtly indicate that the arbitrator should know what constitutes ‘fairness’ before administering it in conflict resolution. Moreover, the parties in conflict are expected to submit to the justice outlined in the Book of Allāh. The arbitrator is thus required to have knowledge of both what constitutes fairness and impartiality, or knowledge of rights and dues relevant to the parties involved and how to apply it.

Whilst the verse demonstrates that it is possible (albeit uncommon) that believers will fight, it should not be possible for either of the two (whilst labelled as mu’mineen) to outright refuse to be judged by the justice of Islam. This is so even when we perceive that the judgement has gone against one party, or has made either party feel humiliated by owing something of compensation or amends to the other party. The companion al-Zubair (rady Allāhu ‘anhu) quarrelled with a man from the Ansār because of a natural mountainous stream at a place called al-Harra. They went to the Prophet (sall Allāhu ʿalayhi wa sallam) for a judgement and the Prophet said:

“Zubair! Irrigate (your lands) and then let the water flow to your neighbour.” The Ansāri said, “O Allāh’s Messenger, is this because he (Zubair) is your cousin?” At that, the Prophet’s face became red (with anger) and he said, “O Zubair! Irrigate (your land) and then withhold the water till it fills the land up to the walls and then let it flow to your neighbour.”[2]

The Prophet had given an order that rather than favour al-Zubair, was actually encouraging him to make a concession. When the Ansāri accused the Messenger of injustice, he ruled that al-Zubair should now take his legally due share of the water. Al-Zubair comments: “I think the following verse was revealed in concerning this incident:

‘No, by your Lord, they will not believe until they make you their judge in the disputes that break out between them, and then find no resistance within themselves to what you decide and submit themselves completely.’”

Notice the link between the conflicting parties’ accession to the justice afforded by Islam and the first verse of the Surah concerning not putting oneself in any way ahead of Allāh and His Messenger. The first verse permeates almost every following injunction. In this case, should a fight take place and the middle-man reminds you of Allāh and His Messenger (sall Allāhu ʿalayhi wa sallam), then the reality of their Iman should encourage them to stop and submit to that judgement.

Justice, Above Everything Else

“You who have Iman! Be upholders of justice, bearing witness for Allāh alone, even against yourselves or your parents and relatives. Whether they are rich or poor, Allāh is well able to look after them…”[3]

The meaning of this verse is that one should not side with the rich just because they are rich. Likewise, do not side with the poor just because they are poor and have drawn your empathy. Even if the sight of a rich person demanding their rights from a poor person frustrates you, side with justice, regardless of whom it happens to be. Be just when imparting justice. Islam’s directive to arbitrators includes not lending one of the two conflicting sides more attention than the other, nor a friendlier address than the other!

The verse goes further to command that one should not even side with themselves, their parents, or closest relatives if you or they are in the wrong. Do everything you can to eradicate the main element that prevents one from seeking justice: your personal inclinations and ‘desires’ (al-Hawa):

“Do not follow your own desires lest you avoid justice…”

The aforementioned verse is one of the quotes that Harvard University plastered on the main entrance to its Department of Justice, labelled as the ‘best justice quote’. Be just in the words you choose to use. Anger often causes some to say the worst of what they know, but happiness can also exaggerate one’s expressions. Some will go to excesses in praising and eulogising those they love, but will completely defame the reputation of their opponents or find nothing good to say about them whatsoever. All of this falls short of justice. 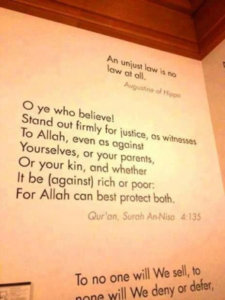 “Certainly, those who were fair will be in the presence of Allāh upon pulpits of light, near the right hand of the Merciful, the Exalted, and both of His sides are right (being equal in honour). (They are) those who practiced justice in their rulings and with their families and in all that they did.”[4]

The Challenge of Reconciling after a Fight

Referring again to the ninth verse of al-Ḥujurāt, we notice that in the first instance Allāh orders to “make peace between them”. But following one party assaulting the other, and after ordering that the person in charge compel the transgressing party to the judgement of Allāh, Allāh says: “If they revert, make peace between them with justice, and be even-handed.” Naturally, the party that has been compelled to peace and forced to abandon its weapons or forgo their zealous offensive will feel defeated and humiliated. Therefore, those making peace need to strive even harder to remove any grudges felt by enticing both parties to return to the brotherhood of Islam.[5] This is something that will be discussed at length in the forthcoming section in shā’ Allāh.

In addition to this, after the considerable effort exerted by the arbitrator, it becomes extremely frustrating for that arbitrator if one of the two parties were to perform an act of aggression again. In such circumstances, there is a chance that the second arbitration will be agreed by that same arbitrator with terms that oppress or disadvantage the aggressing party. The person or party making peace is thus reminded that even if they are aggravated by that transgression, or indeed they were compelled to “fight the aggressor”, they should not make that a reason to forgo justice and fairness towards them if they forgo their violence and return to the Command of Allāh.