Shackled Minds: “Before and behind them a veil…” 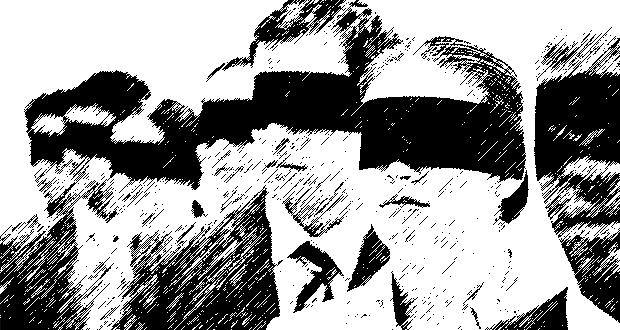 The first six verses of this remarkable Sūrah glorified the Qur’ān and exalted the Prophet’s position before human beings. This, then, is the complete package of guidance: the Man and the Message. With the message of the Qur’ān and the teachings of the Prophet the people of Truth are empowered to reform the world around them. Even with the best resources for the task, the response from most people will be rejection. An insight into the heart and mind of such people is now provided through powerful imagery.

The Word has been justly carried out against most of them so they have no Īmān.

During his lifetime, the Prophet (sall Allāhu ʿalayhi wa sallam) invited many people to Monotheism and to the true worship of Allāh. This verse conveys a great deal about the state of the people to whom the Prophet (sall Allāhu ʿalayhi wa sallam) was sent. Among these people there were some who broke away the shackles of ignorance and awoke from their state of heedlessness. They were the brave ones who rose to the call and believed in the message of Allāh. What is more striking, however, is that the majority remained upon their disbelief (Kufr and Shirk). Allāh tells the Prophet elsewhere in the Qur’ān that “most of the people, although you strive [for it], are not believers.”[1] It is those very people that the ‘word’ becomes binding against,[2] and according to the scholar and Mufasir, Imām Al-Tabari, it means that the punishment had become incumbent on the majority of them for their denial of the truth.[3]

A lesson for us to reflect on here is that we should not be so surprised when the majority of people reject Islām. In fact, according to the narration of Abū Hurairah (raḍiy Allāhu ʿanhu), 99 out of 100 will end up entering the Hell-fire.[4] This is not to say that those who follow correct guidance are few, but it emphasises the sheer number who choose to move away from it. Allāh knew, even before He brought those disbelieving people into existence, that they would use their God-given free will to reject His signs and His Prophet’s call, and choose instead to worship others beneath Him. Thus it was also written that the fate they would earn by their evil deeds would be punishment in the Hellfire.

Thus the lasting lesson for us is that it is our responsibility to propagate the message to the masses as much as we can but the acceptance of the message does not lie in our hands as,

“…your responsibility is transmission and the Reckoning is Ours.”[5]

We have put iron collars round their necks reaching up to the chin, so that their heads are forced back.

As a consequence of their disbelief, Allāh illustrates the vivid and horrific image they display as a consequence of their rejection. Heavy shackles are placed around their necks and wrapped around as far up as the chin, causing their heads to be forced upwards. This then disables them from looking downwards.[6] The majority of scholars hold the view that what is meant here is that they are chained up to such an extent that they are unable to perform any good.[7]

This is a key concept in Islām, the concept of Tawfīq, which is to be helped by Allāh to perform a good deed when the opportunity presents itself. People have the ability to do good but what helps them land a good deed? This then is the Tawfīq from Allāh. The opposite of this is Hirmān. This is the state of being deprived from performing the good deeds that are pleasing to Allāh (subḥānahu wa taʿālā). Those who have been given Tawfīq by Allāh manifest by their actions the statement of Allāh related in a Qudsi Ḥadīth

Those who are prevented from good, however, are in this state of being ‘Muqmahūn’, which was described by the commentator on Qur’ān, Mujāhid (raḥimahu Allāhu), as a state whereby

“their heads are raised, and their hands are placed over their mouths, so they are restrained from doing anything good.”

We have placed a barrier in front of them and a barrier behind them, blindfolding them so that they cannot see.

Allāh has made their evil deeds, bad habits and backward practices beautiful, appealing, and praiseworthy to themselves, so they wonder about blindly, unable to differentiate between guidance and truth. What imagery Allāh provides with regards the disbeliever! It captivates the mind of the sincere reader of the Qur’ān and builds a loathing for misguidance and longing and yearning for guidance. Imām Qurtubi, another great commentator of Qur’ān, states that this is a fitting description of those people who come to know of the truth and it is made plain to them yet they argue and dispute it, turning away in arrogance. Similarly, in reality these people struggle to see the truth even when it is directly in front of their eyes, let alone follow it!

In our times varying degrees of this phenomenon are visible across the board. It is clear that it applies primarily to full-blown deniers of Islām, however to a lesser extent it also applies to some misguided Muslims. For example, those Muslims who have an intellectual inferiority complex are unable to see the truth and benefit of many Islamic values that are crystal clear to many others. This is often because they look to Islām through a different ideological lens, such as contemporary, individualistic liberal values. This creates an inner refusal to submit to certain Islamic concepts or injunctions that are unpopular or unpalatable to some liberal sensitivities, which manifests itself with them trying to find ways to explain away or outright deny them. This is a symptom of an inward problem, arguably an intellectual subjugation which prohibits them from thinking outside of the popular paradigms of the day.

Among the cures to this problem is rebuilding the sense of magnificence, glorification and veneration of Allāh and His signs, including the Sharīʿah. This was a central role of the prophets and messengers, as it necessitates anyone with sound intellect and unfettered thinking to submit to that which is conclusively established as coming from Allāh.

It makes no difference to them whether you warn them or do not warn them: they will not have Īmān.

Now that Allāh has uncovered for us the hidden dimensions of the misguidance of those who disbelieve, He then consoles the Prophet’s anxiety over the lack of response to his Da’wah. He addresses him here by telling him that it is the same whether you warn them or you do not, the reality is that some of them will never believe. Since they have turned away from Me, misguidance is now surrounding them from all corners, impeding them from doing any good and, on top of this, they are barred from seeing guidance.

Without doubt the message has to be delivered to the people. It is imperative they hear the call of Allāh. Once heard, the choice to accept the invitation to true guidance lies with them. However, once they have heard the call to guidance, they will have no right to claim ignorance to it on the Day of Judgment, where every man will be recompensed. Allāh informs us that He sent

“messengers as bringers of good tidings and warners so that mankind will have no argument against Allāh after the messengers.”[9]

The word ‘Muqmahūn’ (verse 8) provides us with powerful imagery. Some interpretations proposed by the commentators of Qur’ān mention that this is a literal description of what will happen in the afterlife Ākhirah. The majority of the scholars, however, say it is metaphorical thus implying that they are prevented them from good deeds or spending in the way of Allāh (subḥānahu wa taʿālā) in other words, they are miserly. It can also imply that they have been prevented from believing and having Īmān (faith) as if their hands are tied up, and that their heads are arrogantly locked up inclined, always looking down at others.

From the many lessons emanating from these profound words, we learn not to concern ourselves with the number of those who follow us or not, or accept our Da’wah or reject it. Most of the people are going to disbelieve, so do not grieve, O servant of Allāh. Take the narration whereby some Prophets will come on the Day of Judgment with no followers who accepted their message.[10] They had no followers in this world but they are the most noble in the sight of Allāh. Dear reader! Be careful not to go against and deter others from the path to Allāh, or you too will face that dreadful end of those described in these verses.

Further to this, the ability needed to perform a deed is through the divine assistance (Tawfīq) of Allāh, not an attribute possessed by man. Remember the story of Qārūn, and his attributing of his wealth and riches to himself rather than seeing them as a blessing from Allāh, and remember how this led to his humiliating end. He possessed the means to do good, but lacked even a shred of Tawfīq to the extent that he did not consider doing good with his wealth despite the best efforts of the community. He lacked Tawfīq, and whoever lacks Tawfīq indeed lacks all good. May Allāh protect us and assist us to what is best.