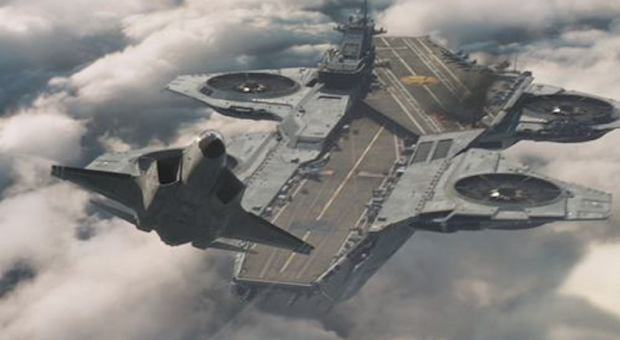 Verse 40 spoke of the sun and the moon streaming along at speed in their own orbits. Even though nothing of the naked eye would suggest that the Sun and Moon are moving at speed, through modern advancements in technology we now know that the Moon orbits around the Earth at a mean velocity of almost 3,700km/h, much faster than the maximum speed of an F16 fighter jet. The next verse moves the discussion to Signs that are closer to home…

(41) A Sign for them is that We carried their families in the laden ship.

As is the case with the entire, coherent and ever miraculous Qur’ān, a clear link exists between this verse and what preceded it, “each one is swimming in an orbit” although maybe not immediately apparent. As was previously mentioned, the word ‘Sibaaha’ contains the meaning of moving, streaming and swimming. The sun and moon are moving following a set stream, floating in space and here the ship also floats and moves, but in water. Maybe from this phenomenon comes the term ‘space ship’. Another visible connection is that there is a shift in the type of Signs which are being discussed, previously relating to the skies (the ‘heavens’) and that which is above and now transitioning to the signs on Earth that we are all familiar with.

The address now becomes more direct by virtue of mentioning signs that mankind physically interacts with, namely the innumerable means of transport which have been fashioned for us. The term ‘wa āyatullahum’ (‘a sign for them…’) has three meanings:

1) It is an ‘Ibrah (example or lesson) for them

3) It is a way of giving ‘Inthār (warning) for them since the following verses contain a stern warning (verse 43 covered in the following article).[1]

The word ‘Thuriyyah’ has been translated by some as ‘forefathers’ and by others as meaning the opposite i.e., ‘offspring’. In reality, this word is from a collection of nouns called ‘Asmaa’ al-Addād’ meaning auto-antonyms. Thus it can refer to offspring or the opposite of this, namely forefathers. Just like in the verse, “And by the dawn when it draws in (‘As’as)”[2] where ‘As’as can either mean to come or to go.

It is as if Allāh is exclaiming to the people of Quraysh that yet another evidence for you, and a great symbolic indication as to the fact that We (Allāh) are in complete control, is that We saved the progeny of Ādam via the ship of Nūh (and all that it contained of animals in pairs). If saving the human race through the Ark was not enough, Allāh further adds that the ship was ‘Mashhūn’ i.e., full, overloaded and equipped with things that a human would need once the flood was over.[3] This term has also been used elsewhere in the Qur’ān, describing the same ship of Nūh,

“So We rescued him and those with him in the loaded ship.”[4]

The seas and oceans have been created and subdued to carry the ships of men and be to their benefit. Once again the supreme power of Allāh is shown through this verse.[5] How can this not be an amazing sign pointing to His immense power?! How is it possible that we can have carrier ships such as an Ultra Large Crude Carrier weighing in at up to 550,000 tons and fighter-plane carriers, yet they float upon the sea without sinking, whereas a 20p piece sinks to the bottom in an instant?! Explaining the physical laws of his creation ‘scientifically’ does not negate His greatness, as it is Allāh who created, and tuned these physical laws to reveal His ability and to serve humanity.

(42) And We have created for them the like of it in which they sail.

Allāh is declaring that these polytheists that are denying you O Muḥammad are enjoying this same favour bestowed by Us unto them. We have made them able to enjoy similar means of travel.

This verse is a parenthetical phrase connected to the previous verse to signal a break in thought. You have a divinely inspired mode of transport: the ship (along with the subservient sea), and on land you also have other forms of transport which Allāh has created. These other forms of transport are ‘Mithl’ or resemble in likeness the ship in terms of their ability to be mounted on by so many people and carry so much cargo and equipment and to traverse across difficult terrain.

Then the scholars differed regarding the meaning of ‘mā yarkaboon’ (‘in which they sail’ or ‘on them they ride’ according to other translations) into a number of views:

1) ‘Maa yarkabūn’ means Sufun i.e., boats or small boats in particular. Also the next verse speaks of drowning and so this must be a reference to sea transport.

2) It is a reference to the ship of Nūh (ʿalayhi al-Salām).

3) It is a reference to the mode of transport Allāh gave the Quraysh: i.e., the camel. The Ibil is sometimes referred to as the Safā’inul Barr as they too carry passengers plus their goods and luggage just like a ship.

4) Others said it refers to any cattle that can be used as a mount thus an extension can be made to our very own transport modes such as modern day vehicles.[6]

In all of this, Allāh is explaining the immense care and affection He has shown human beings by creating this mode (ships) of transport for them, which they can use, particularly when walking and riding is not feasible, and when carrying our goods across distances ourselves is strenuous. This is of particular benefit to the old and weak amongst man, thus its provision is out of the gentleness of Allāh towards our weaknesses and His mercy despite the inadequacy of our gratitude.

In another verse, Allāh says:

“They carry your loads to lands you would never reach except with great difficulty. Your Lord is All-Gentle, Most Merciful.”[7]

By using the word Thuriyyah in verse 41, with the two meanings that it can imply, causes it to capture all people; forefathers and children alike. This blessing of being able to travel on sea relates to all people.

The Early Muslim exegetes provided various examples to illustrate the meaning of the term ‘maa yarkaboon, in which they sail’, without specifically elucidating the claim that it means one mode of transport and not another. This broadens out the meaning to apply to any form 0f transport that human beings will invent for travel, such as the helicopter or spaceship, until the Day of Judgment. This then points to the fact that not only did Allāh give us some original forms of transport but also gave us the ability and resources to come up with other modes of transport when the need entails, but whatever we come up with of ‘inventions’, they are ultimately attributed to God. After all, did He not endow the human with a mind capable of development, novelty and creativity?

Once more, the power of Allāh coupled with the benefit it brings to His creation is portrayed in these verses. Not only did Allāh save mankind from the flood but He saved the animals too, and humans are reliant upon animals for their survival. So the mercy of Allah is that He benefits His creatures directly, and He facilitates means for their benefit in their surroundings.