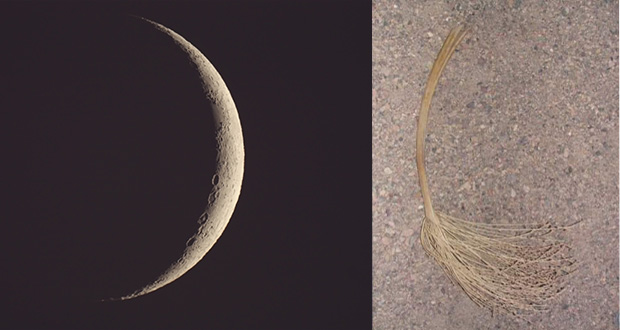 The following verse from the magnificent Sūrah Yā Sīn says that when the moon reaches a certain phase in its waxing it resembles an old date palm stalk. The waxing of the moon, as well as its appearance, carry a Sign pointing towards something far greater and more profound…

(39) And We have decreed set phases for the moon, until it ends up looking like an old date stalk.

The magnificent Qur’ān never ceases to convey its message through the use of captivating imagery. In bringing meanings closer, to objects that are with us and tangible, one relates more closely to the intended message, maybe helping one associate the tangible with the intangible, the cosmic with the terrestrial, the seen with the unseen. There is more than one recitation for the above verse. Some read it as ‘wal-qamaru’, thus connecting it to the previous verse 38; namely to ‘al-shamsu’ which in turn also connects to verse 37, ‘al-laylu’. This listing, all connected to each other denotes that all that is being mentioned are ‘signs’. In this case the meaning is ‘and (another Sign for them) is also the Moon, for which We have determined stations (or phases)…” and so on.

Other recitations change the short vowel on the last letter so that it becomes ‘wal-qamara’ as in the popular recitation, ‘Hafs’ shown above. In this case the meaning becomes, “and We have decreed set phases for the moon…” following on from the Taqdeer (what has already been determined by Allāh) spoken of in the previous verse just gone. The explanation would thus be: ‘and We Determined (also, like We did to the sun), the moon into phases…’

Imam al-Tabari says that both of these recitals are correct and convey a correct meaning, therefore the overall meaning becomes: ‘And a Sign for them is that We have measured out the moon in stations (or phases)…[1]

So the moon appears to successively increase in size until it becomes full. It then decreases as the month progresses until it returns back to being like a dried-out, curved stalk of an old date palm (the remaining crescent) before it totally disappears. Ibn Juzay[2] confirms this meaning, explaining that ‘Urjūn is the branch of a date palm tree and it resembles the moon when it reaches the end-stage (known as the ‘waning crescent’). The moon resembles the ‘Urjūn in three ways:

The Qur’ān shifts our attitudes towards things we tend to hold as arbitrary or coincidental into seeing God’s power and wisdom behind such phenomena and appreciating them as such. This new shift in attitude brings with it a whole new reaction to witnessing the same phenomena, now the person is able to marvel over the wisdom behind it and express gratitude to God for having made it part of the human world.

In this verse Allāh informs us about one such physical sign that in fact contains a significant Spiritual Sign and that is indicated by the fact the verse does not simply say that the moon passes through certain phases but rather: *We* have decreed set phases for the moon. The waxing and waning of the moon is not occurring independently of God but rather it is dependent upon Him, as such the royal We is employed in the verse, as if to say We calculated it to go through certain phases. The precision and constancy with which the whole phenomenon occurs as well as the benefits it brings humanity in terms of moon light, tidal movements and time-compartmentalisation, all point towards the wisdom of Allāh subhānahu wa ta’ālā. This chapter began with: ‘and by the Wise Qur’ān’ and 39 verses later a glimpse into His infinite wisdom is showcased.

Heedlessness of man often requires that his attention is drawn to what is otherwise stark. If we reflect on this phenomenon known as ‘the moon’, we come to realise that it expounds on the greatness of its creator in many of its aspects. For instance, were this immensely sized mass positioned closer to the earth, humanity would drown due to its gravitational pull on the earth’s oceans, and the ecosystem would be thrown into chaos. It provides a cool, calm light in the blackness of night, to the service and entertainment of travellers, but without disruption to those resting. It is an everlasting clock, timed by precise calculation without fail or dysfunction, despite its own orbital circle rotating anti-clockwise,

“They ask you concerning the new moon. Say: They are times appointed for (the benefit of) men, and (for) the pilgrimage…”[4]

How few ponder over this, or the creator of such grandeur who is absolutely greater and worthy of our worship and gratitude.