Where does the Sun go after it sets? 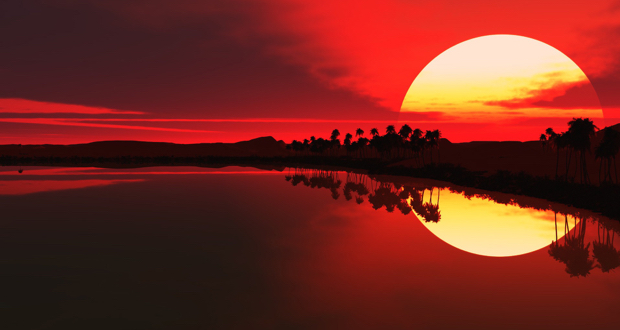 The previous verses spoke of how land, pertaining to place (Makān) is under the full power and control of Allah as He resurrects it from a state of barrenness to bring out lush green shoots and leaves and then vibrant fruits of different kinds. After speaking about control of the land, He, the Almighty, then speaks of His control over signs which pertain to time (Zamān).[1]

(37) A Sign for them is the night: We peel the day away from it and then they are in darkness.

The leader of the scholars of exegesis, Imām Tabari states that another of the signs of Allāh’s power and ability (Qudrah) to do whatever He pleases is that He has stripped out of the dark-night the daylight. Here the term in the verse ‘from it’ (minhu) means ‘anhu’, as if to say: We have extracted the daylight out of the night and so We brought the darkness; We took away the light and therefore only darkness is left behind.[2]

We are shown how the ever-changing phenomena of night and day points towards the Oneness (Tawhīd) of Allāh, His power, and the necessity of His Godhood (Ilāhiyyah).[3] Can anything occur with such intricacy, precision and splendid continuity as does this phenomenon and be operated by two or more deities? All of Allāh’s creation not only points to His greatness, but to His Oneness.

“And behold, they are in darkness”, they end up in darkness due to Allāh stripping out the daylight, incapable of bringing about such engulfing darkness, and incapable of restoring its outstretching light. An intelligent mind never perceives this process of change as a ‘natural’ phenomenon, independently occurring on its own accord without a creator or controller. Certainly, it is Allāh who is behind such magnificent changes in creation, whilst our incapability necessitates our humility and submission to Him, Most High.

Also contained within this verse is astonishing symbolism of the resurrection. The life and activity of man is preceded by an absence of light, it then begins with sunrise, before ending with sunset, before again the sun rising for a second accountability. The One capable of bringing about the sun, after it has set, is surely capable of extracting life from the dead, and death from the living. To affirm the former but reject the latter is inconsistent and illogical. That may be why Allah mentions before speaking of a similar phenomenon for the barren earth: “Each and every one will be summoned to Our presence.”[4]

(38) And the sun runs to its resting place. That is the decree of the Almighty, the All-Knowing.

The ‘and’ of connection (‘Atf) here could relate to the previous words ‘wa ayatullahum’ and so this is yet another addition to the long line of signs pointing to the power of Allāh. The underlying theme remains that if He is able to control or bring about such amazing things in the creation, then surely He can resurrect your lifeless bodies.

Ibn Kathīr states that the sun will continue to flow or stream along (tajree) until the last moment of the life of the universe and that is the blowing of the trumpet, at which point the entirety of the universe will be rolled up.[6] The spirit of the verse is to illustrate the sun as being a creature of Allāh and its function in our world as being a product of its devotion to its Creator. Moreover it expresses the Might and Majesty of Allah in bringing such a huge destructive entity under control and subservience.

The word ‘salkh’ in, “We peel (salakha) the day away from it and then they are in darkness”, is commonly used for skinning a sheep and taking off the skin from the flesh.[7] That is why some scholars of exegesis would say that the night is original matter, whilst the day is the incidental i.e., a consequence of no darkness. The day is likened to the skin and the night likened to the actual sheep. Not only is the skin removed to lay bare the sheep but it also can be rolled back on to cover up the sheep, just like the day comes back to cover up the night.

The power of Allāh is being displayed here through a number of linguistic tools:

1. Attributing the phenomena of the ever-changing night and day to Himself. The word ‘naslakh’ uses the royal ‘We’, in the first-person narrative: We peel the day away from it and then they are in darkness.

2. The usage of the word ‘mudhlimūn‘ in, ‘and then they are in darkness (mudhlimūn)’, highlights that the focus in this verse is not that night time comes about but rather that human beings are cast into darkness because of it. This then highlights the weakness of human beings as they are subject to this phenomena and cannot challenge it.

The great scholar Abū al-‘Āliyah mentioned: “There is nothing in the skies; stars, suns, moons or above except that it prostrates to Allah when it sets; then it seeks permission from Him to return and rise again.”[8] They prostrate in a manner that befits their nature with humbleness and awe of Allah, just like the prostration of the angels, Jinn and mankind occurs in the manner that befits each of them. If these magnificent signs of creation, some of which responsible for providing vital light to the earth and unfathomably large in dimension humble themselves before Allah, lowering themselves totally before His majesty, who, O stubborn Man, are we to refuse?