Screaming for the help of Allah 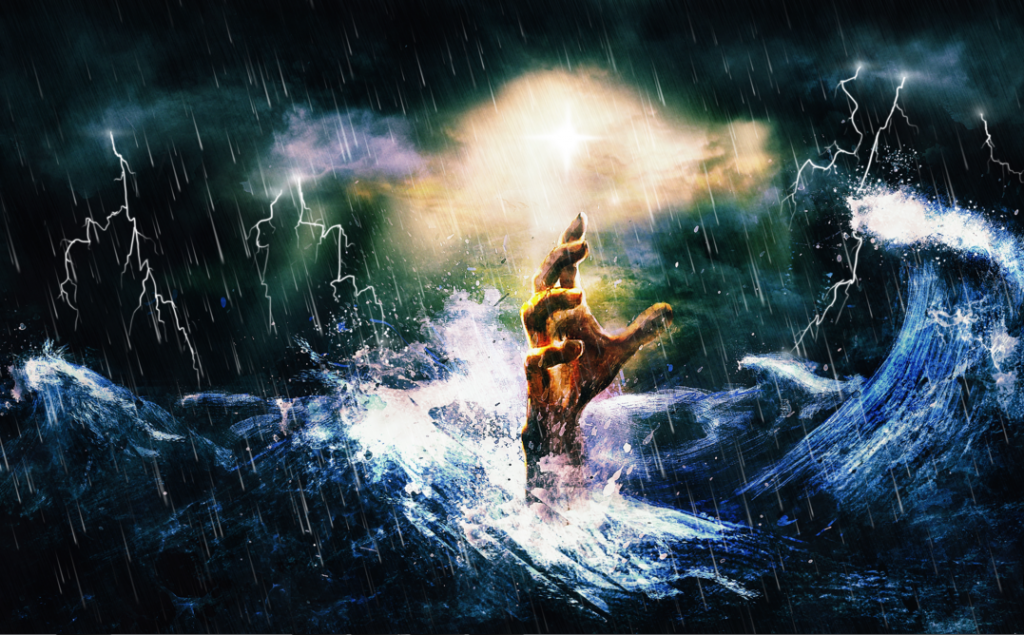 Having listed His blessings on land, sea and in the universe, one is left to wonder at the extent of heedlessness held by those who obstinately remain to surrender to other than Him given their dependence on Him from His extracting edible crops from grain to their voyage at sea; all signs of His favour and grace upon man. It is often only when these favours seize that they notice and the conscience is struck and man finds no option but to harmonise his internal recognition with action and scream to Allāh for help.

Part 21 – Screaming for the help of Allah

(43) If We wished, We could drown them with no one to hear their cry, and then they would not be saved

After illustrating how Allāh cares for His creation and facilitates their lives with ease and blessings, He tells us to take note that though He made the sea subservient to carry these ships, He could just as easily take this blessing away and cause us to drown. This exemplifies to us His Power from another perspective. Just as He can do what He wills to bring about a coordinated and organised system which we see to be part of nature, He can easily reverse this and cause what was subservient to their service to become the means of their destruction. This truth has never been more starkly presented before us as it is today. In the past few years alone we have been witness to global floods;[1] sinkholes;[2] typhoons in the Philippines;[3] earthquakes in Haiti, Afghanistan and Pakistan;[4] tornadoes in Australia;[5] cyclones in Yemen;[6] volcano eruptions and forest fires in Indonesia,[7] [8] to name a few. It is of the power of Allāh to turn calm waters and dormant rocks into rampant beasts.

In this Āyah Allāh evokes a powerfully vivid image in our minds. Imagine you are one of a group of people sailing the oceans on a ship in the darkness of night. A storm approaches in the midst. You see it coming. The waves start to build up and you, in turn, start to become anxious. You realise that you are now in a critical situation. The ship that was once stable begins to rock from side to side. You feel that the moment has come; and that death could be imminent. You are in need of help and everyone on the ship is incapable of sending you to safety. At this very desperate moment Allāh states that there is no ‘Sarīkh’ for you. Sarīkh, coming from Sarakha, which means to cry, yell, or shout out for help. Your cries and yells will be of no use and there will be no one to aid you.

With the situation increasingly precarious, you grab onto whatever you can then fall from the ship into the water. As you wail, the seawater goes into your throat; you are now in the process of drowning. During this moment, you would sacrifice all that you own, and every moment in your life for anyone who would help you out, but there will be no one to save you. “Wa lā yunqathūn”, “and then they would not be saved.” Not only will they not be saved from drowning but they will also not be saved from the punishment that awaits them.[9] Therefore you will have:

– No one to save you (no ‘Mughīth‘) from the possibility of such a fate.

– And you will not be saved whilst you are drowning.[10]

Ibn ‘Āshūr said that in the coming together of these two expressions, “fa lā Sarīkh lahum” and then “wa lā yunqathūn” in this order Allāh emphasises emphatically the notion that if we find ourselves in utter distress, in a critical situation, no one can save us except Allāh. There is no one else out there able to save us, or that even has knowledge of our distress,

(44) Except as an act of mercy from Us, to give them enjoyment for a time.

It is only by Allāh’s mercy that we live on the land and traverse the seas with relative ease. He equipped us with the ability to walk over rough and rugged terrain,

“And Allāh has made for you the earth a wide expanse, that you may go along therein in wide paths.”[11]

The earth does not rupture beneath our feet, nor does the flowing mantle, just 40km beneath our feet, above a 5000 degree Celsius outer molten core,[12] smoulder us on our travels. It is cool by the mercy of Allāh, and free of striking disasters by the mercy of Allāh. The great scholar of Tafsīr, Ibn Kathīr explained that ‘illa rahmata minnā‘ means it is by Our mercy that you live and travel the land and sea in relative peace, bound by ‘wa mataa’an ila heen‘, “enjoyment for a time”, or a short while[13], before this enjoyment is multiplied manifold, or rendered into punishment. Thus their current comfort and enjoyment is but to deter their punishment. It is as though Allāh said ‘and they would not have been saved were it not for our mercy and wish to deter them for a time.’ Qatāda said that the term “ila hīyn” means until their death.[14] We find that many nations prior to the nation of Muḥammad (sall Allāhu ʿalayhi wa sallam) such as that of Nūḥ, Hūd, Sāleh and Mūsā among many others had their punishment hastened by Allāh whereas the disbelievers of the final nation of Muḥammad (sall Allāhu ʿalayhi wa sallam) has had its entire punishment delayed until the latter life.[15]

Ibn ‘Āshūr suggests it means that every living creature is bound to die. If he escapes this time, he is sure to find death shortly after. The sad fact is that everyone wishes for a longer life even though they know it is coming to an end.[16] This heedlessness is manifest in today’s society. We are increasingly preoccupied with the perishable and ephemeral, focusing all our efforts and attention on material gain, material goods, material wealth, yet we do not prepare for our imminent deaths, nor do we consider that our preoccupations are superfluous if they are not rooted in our Hereafter.

As we previously mentioned, the term “Sarīkh” means to scream, shriek, yell and shout. The same term was used in other places in the Qur’ān, namely about the man Mūsā had defended the day before in a scuffle with another Egyptian:

“…Then suddenly the man who had sought his help the day before, shouted for help from him again (“Yastasrikhuh”)…”[17]

So “Sarīkh” refers to the one who comes to the rescue in response to another crying out for help. Consequently, when waves crash onto one’s ship and it becomes wrecked he will cry out for help but there will be no Sarīkh to help him whatsoever. And when he falls into the sea and the seawater enters his lungs there will be no one to save him, where ” al Naqth”  has this meaning of to retrieve from this desperate situation. Bringing the two expressions together in this order gives more of an emphatic meaning; there is absolutely no one out there that could possibly save you in times of distress, except Allāh! The exception term “illa” separates the mercy of Allāh from their shriek for help, i.e., the mercy extended to them from Allāh is not a result of their yelling, or a result of a saviour (“Munqith“), but rather through the exclusive mercy of Allāh manifesting itself by the calming tides, and the settling winds.[18]

In our times, and specifically in secular societies, the concept of idol-worship is not as widespread as it was between the people of Quraysh. This is not to say that it is not more than rampant in the sub-continent. However, when the Quraysh worshipped idols, they did so attributing some of the attributes of Allāh to them. In a similar way, it does not require that a person ‘prostrates’ to an idol to be an ‘idol-worshipper’. In our times, people attribute some of the attributes of Allāh to other than Him, an example being the concept of natural disasters. News-outlets and the population in general say that we have upset ‘mother-nature’, attributing to it the power that solely belongs to Allāh.

Whether we experience a traumatic event in our lifetime or not, we are never self-sufficient or not entirely dependent on Allāh. Often, we put Allah to one side, then only yell for His help when we are on the verge of catastrophe, only to forget that we did so after we are enveloped by His mercy. The reality, though, as Al Hasan al Basri states is that:

“I have never seen a certainty closer to being doubted than people versus death. A person’s hour, or time of greatest desperation occurs at his death,”[19]

The many who overlook this, side-lining Allāh and ‘enjoying’ the calm tides of life, will not be saved when they yell for help at the time of death. If it is coming without doubt, when will our preparation begin? At one stage or another, what you are most certain of will occur. Thus, a believer should never feel safe from the punishment of Allāh even whilst we may be enjoying His blessings. Allāh mentions,

With this in mind, just like a sailing ship, a believer voyages to Allāh by balancing all of the hope for His mercy with fear of His punishment. Our hope for His mercy should not create a feeling of excessive hopefulness, nor should our fear of punishment push us into despair, both causing one to abandon effort and action. Ibn al Qayyim said:

“The heart on its journey towards Allāh the Exalted is like that of a bird. Love is its head, and fear and hope are its two wings. When the head is healthy, then the two wings will fly well. When the head is cut off, the bird will die. When either of two wings is damaged, the bird becomes vulnerable to every hunter and predator.”[21]

[19] ‘A person’s hour occurs at his death’ is the interpretation of a longer Hadith in Bukhari and Muslim: “Some tough men among the Bedouin came to the Prophet (peace and blessings of Allaah be upon him) and asked him when the Hour would be. He would look at the youngest of them and say: ‘If this one lives, old age will not catch up with him until your Hour begins.’” Hishaam [one of the narrators of the hadeeth] said: This means their death.”