Taming the Heart in the Animal Kingdom 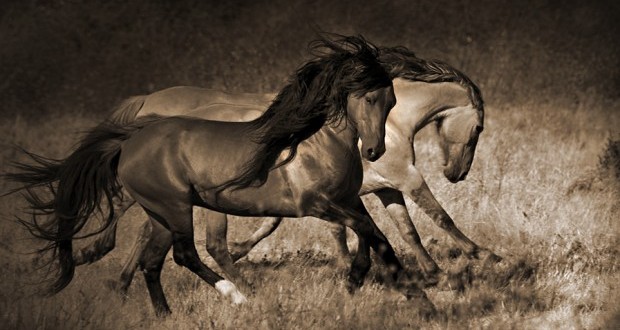 It needs only a living heart, clean from the blemishes of pride and conceit, to see how much we have fallen short of gratitude to Allah. A horse’s swinging hoof has the power to crush the body of man to his death. Yet Allah has tamed it, such that it lowers its head to a child pulling on its reins. All the while man, the recipient of this and other blessings and the ultimate benefactor, behaves untamed under a Lord All Capable, yet Most Merciful.

Part 35 – Taming the Heart in the Animal Kingdom

71) Have they not seen how We created for them, by Our own handiwork, livestock which are under their control?

Do these people who associate partners in the worship of Allah, by taking their idols and statues as deities, not see what We have created of Anʿām, i.e. cattle and other livestock such as camels, cows and sheep that Allah placed under the control of Banī Ādam. You are therefore able to keep them, farm them and control them as you wish.[1]

Al Qurtubi extrapolates; do they not see, using the sight of their hearts through a process of reflecting, contemplating and pondering over what We have originated and brought into existence without using a proxy or intermediary (Mimma ‘Amilat ‘Aydeenaa), of Anʿām such that humans are capable of overpowering them and controlling them to their benefit.[2]

Ibn ‘Āshūr comments that after deconstructing and nullifying the arguments of the polytheists, Allah now relates the blessings that He has conferred upon all of mankind and how those who disbelieved shamefully embraced these blessings with ingratitude and turned away from their dispenser, and thus His exclusive right to be worshipped. They directed worship to other deities beneath Him claiming all the while that they bring benefit into their lives. But now, they are being directed to reflect over things that they take benefit from in their everyday lives such as the Anʿām, produced for them by Allah out of His Sublime Power.[3]

Imam al Tabari mentions that these Anʿām have been equipped with the potential to carry out the instructions they receive from humans, and behave in their service; they can be ridden and used for travel, whilst their flesh is also edible.

According to al Qurtubi, wa Thalalnaha means that Allah subjugated them under your control, to the extent that a young boy (Sabiyy) can jump onto one of these Anʿām, riding it and turning it about as he so wished.

Ibn ‘Āshūr notes that Tathleel is to make something submissive. Being Thaleel is the opposite of being ‘Aziz and it entails not being able to avert harm from oneself. Allah said that He placed this quality in Anʿām towards man, such that it responds submissively and complies with man’s requests and instruction even if it does not want to do so; be that with regards to riding, carrying things or even being slaughtered. That is why Allah then said

“…some they ride and some they eat.”

73) And they have other uses for them, and milk to drink. So will they not be thankful?

Imam Al Tabari says that Wa Lahum means and for them in the Anʿām there are benefits in terms of their wool, their fur and their skins. The latter includes producing leather and water skins through tanning, and further to this you can drink their milk.[4] Will you then not show gratefulness to Me for at least these things and the goodness, care and consideration I have shown you through them? Demonstrate your gratitude through worshipping Me as your only deity, renouncing your obedience of Shaytān and your worship of idols.[5]

According to Ibn Kathir, Mashārib or ‘drinks’ can also include the urine of some Anʿām like the camel, which can be used as medicine to treat certain conditions.

– The use of Istifhaam Inkāri or negative questioning in Alam (have they not) is to express dismay at the fact that such people cannot see the obvious blessings Allah has bestowed, despite them being so closely linked to them on a daily basis. It is the seeing with the heart and a dead heart cannot see it.[6]

– The word ‘Lahum’ is like saying We created Anʿām for them and because of them, and this applies to all items of benefit on this earth. Allah created them to serve man and to honour him as Allah said explicitly in another verse: [7]

– ‘Khalaqnaa’ (we created) is in the first person narrative, not in the passive narrative such as when Allah says: “Khuliqa”, “was created”. This is because here there is a sense of honouring being expressed towards man, thus Allah refers to His Majestic self as the One who blessed them with Anʿām. It moreover makes clear to whom exactly the polytheists should direct their gratitude.

– There is double emphasis surrounding who the blessing of Anʿām is from. The first is noticed in the word Khalaqnaa as previously noted, and the second in Mimaa ‘Amilat Aydeenaa (by Our own handiwork). The first points towards His honouring of man but the second points to His overwhelming care for humans as it came from the work of His Own Hands, ‘azza wa jal.

– The bringing forward (Taqdīm) of the possessive term Laha before the noun Maalikoon (under their control) is as if to say that it is over these creatures from whom you benefit greatly and in so many ways that you have control over. This gives a great sense of Ihtimaam or special attention to these Anʿām.

– The noun Maalikoon establishes a permanent meaning of control, against using a verb form which is caged by time.

– In verse 73, the Fa implies reasoning (Sabab) as if to say, ‘after all of this will they not be grateful? Are not all of these blessings heaped upon them enough reason for gratitude?’

– Mashaarib can refer to both drinks and drinking utensils like the water skins used in ancient times to carry water.

– The use of such wording and construct expresses the great blessing Allah has conferred to human beings and the greatness of His Rububiyyah and His unbounded care towards His creatures. But such is only realised by a living heart, one that uses its provision and surroundings to notice its poverty to The Provider, and as such find itself submitting in gratitude.

– What is the extra blessing in Tathleel (subservience) if we are already owners over these Anʿām?

– The Tathleel completes this great blessing. Although through ownership we can overpower them and capture them to remain where we want them to be, without their Tathleel nature, we could not necessarily ride them, milk them or extract their benefits to the fullest and with great ease.

– According to Abu Hayyaan, Allah’s use of Thallalnahaa in the first-person narrative makes it clear that is Allah Who gave mankind this benefit. Had He not made them such, humans would not be able to mount, ride, drink and eat them. This is why we make Tasbeeh of Allah, glorifying Him from any imperfection when we get on board any mode of transport and say:

“Glory be to Him who has subjected this to us. We could never have done it by ourselves.”[9]

– In Surat al Nahl Allah speaks of another blessing that Anʿām possess, that is Jamaal or beauty. Beauty created for humans to gaze at and marvel over, quite simply, to please their eyes. These aspects, when reflected over, really give us a greater insight to the Mercy and kindness of Allah towards us.